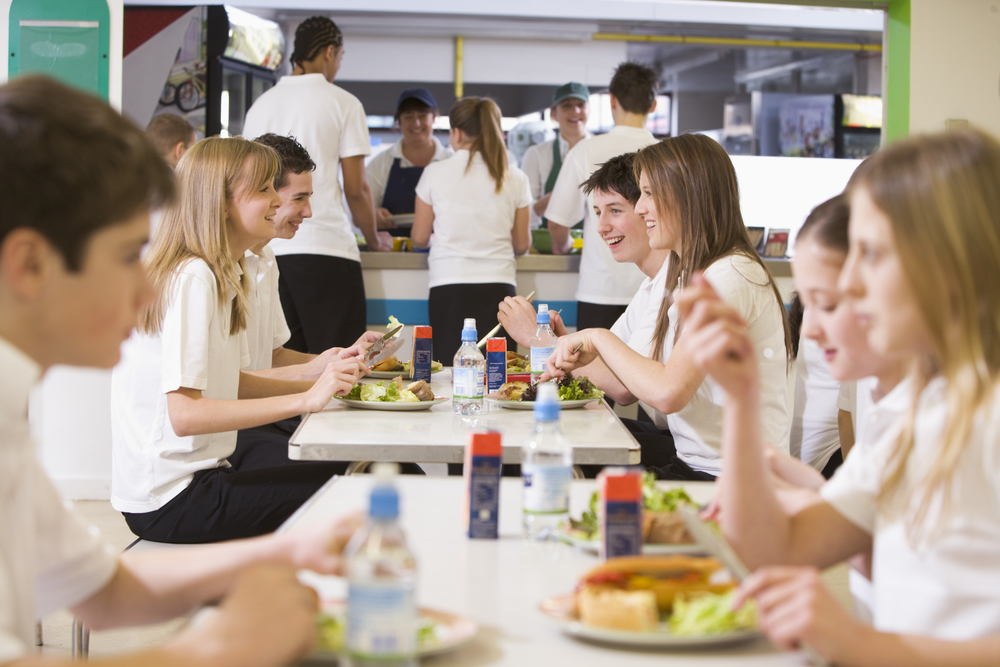 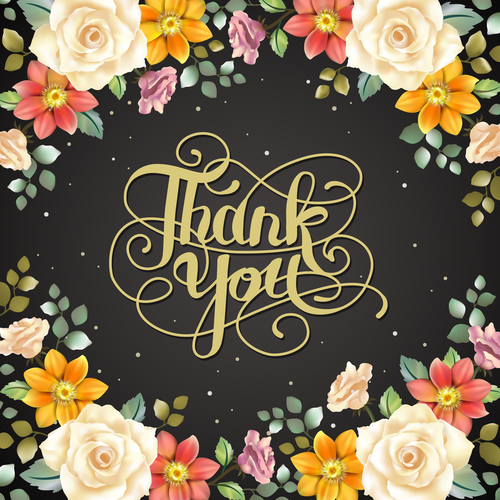 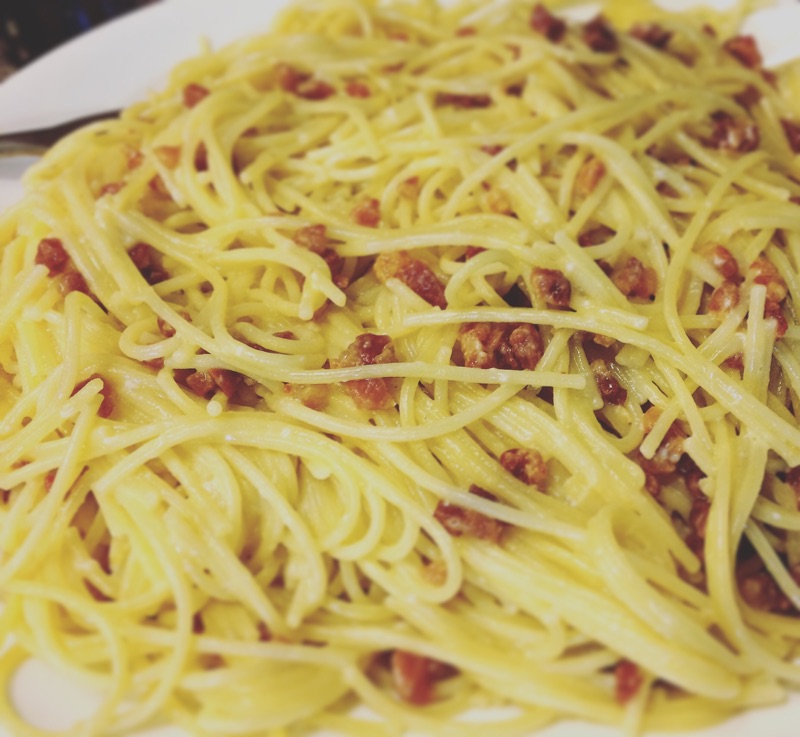 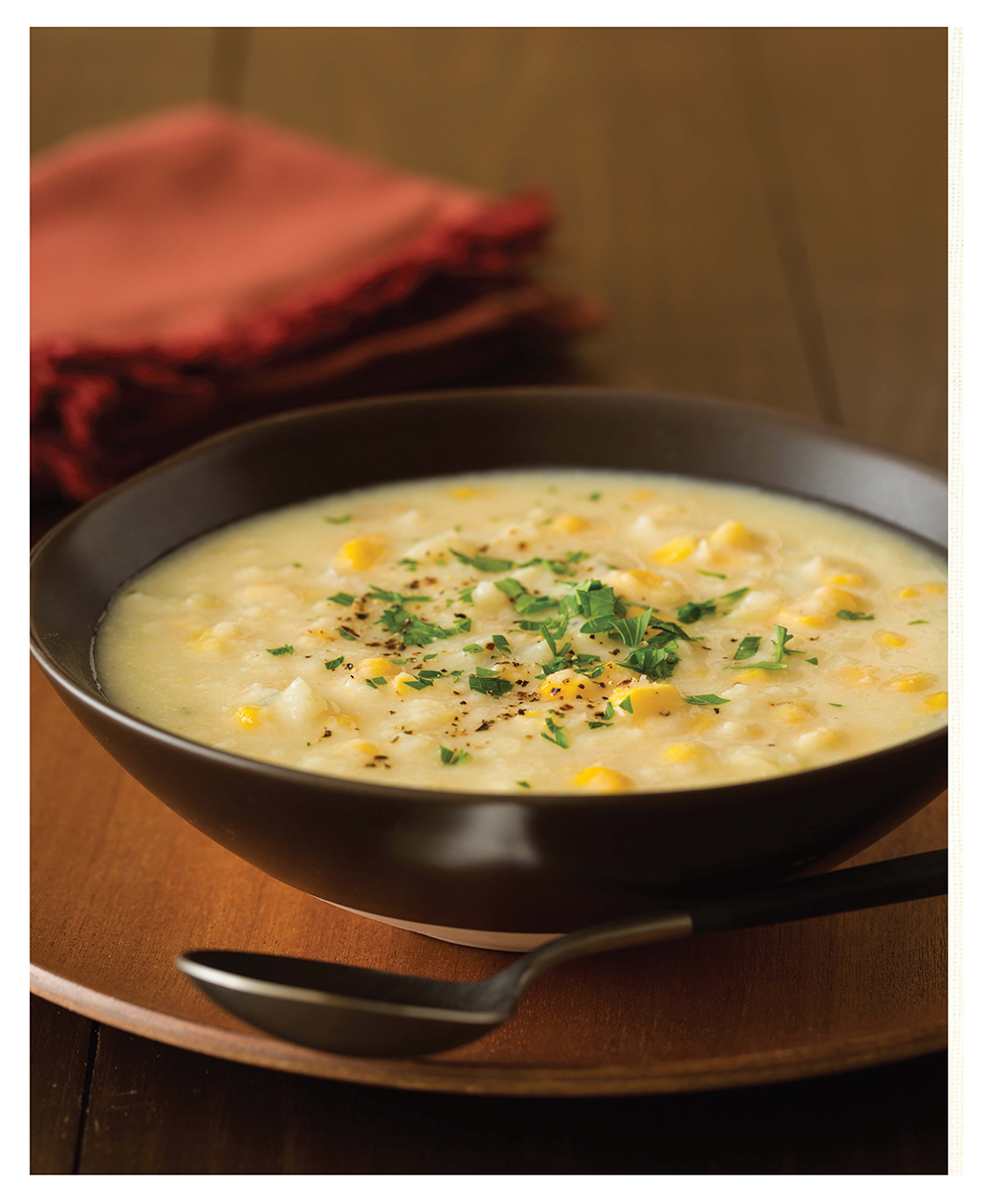 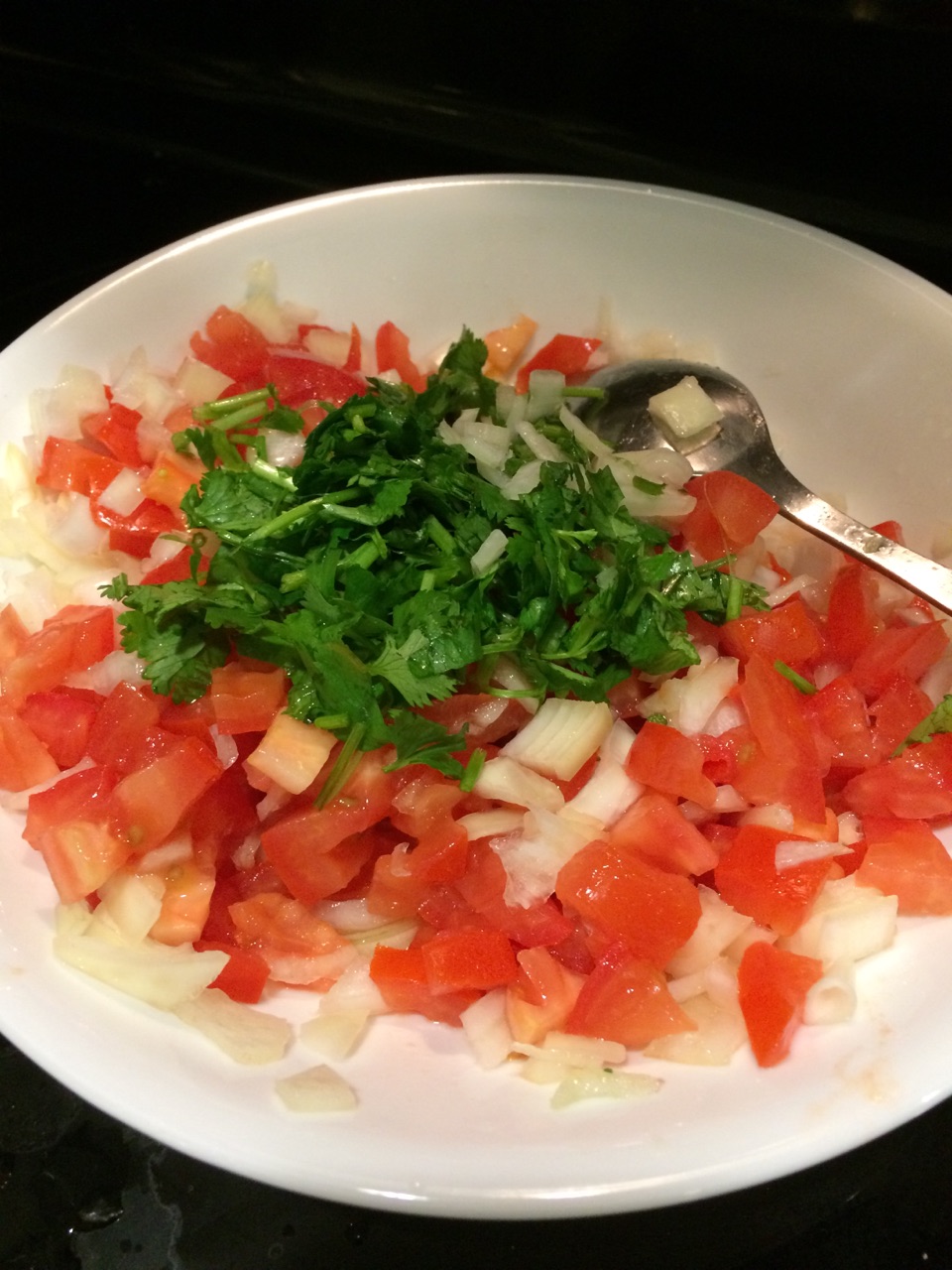 Hi friends, I can’t believe it’s been 18 months since I posted an update here and I wanted to check in and say hello!

First of all, I’ve been focused on my speech therapy blog SpeechisBeautiful.com. But last summer I launched a YouTube channel: Sarah Wu and I know you guys will like it a lot!

I’ve been using video with my speech therapy students to work on sequencing, answering WH-questions, increasing vocabulary, describing, and retelling. Recipe videos are great for this type of work, but I’ve had trouble finding videos that work. Typically there’s too much talking and the video moves too fast. I made these videos wordless because I expect the speech pathologist or special educator to narrate the steps. My videos are without distracting faces, no text on the screen, and shot from a first person viewpoint. There is background music (and you can mute it). These are great for life skills instruction and for use in special education classrooms too.

I have just started these videos and plan on doing even more! One thing that has surprised me is that my students don’t know what butter is. Some of them call it “cheese.” Anyway I’d love to hear your suggestions for more videos that I can use with my students. Thank you!

If you were wondering what I’ve been doing over the past few years — and you are also interested in going all the way back to how I started the project, I recently sat down for an interview on the Food Blogger Pro podcast. 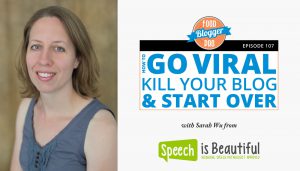 It’s been a rough road for me since I started the Fed Up With Lunch project, truth be told. But I decided to share my story because I wanted others to stop wishing for a “viral moment” to happen in their lives. It’s kind of disturbing the lengths people go to in an attempt to have something they do “go viral.” For some going viral is a wonderful thing, but for others there is a price to be paid.

Thanks for your support over the years — it has meant so much to me. Don’t forget that you can still keep up with me on my instagram account (@sarahwuslp) or follow along on my speech therapy blog: SpeechisBeautiful.com. I’m also on Pinterest (@sarahwuslp), where I share lots of pins about speech therapy and educational topics — so keep that in mind! 🙂 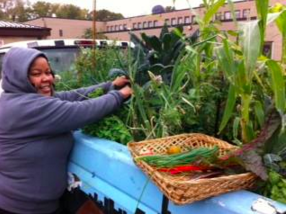 Today’s guest blog is written by Tim Magner. He is a children’s book author, food educator and dynamic teacher. While visiting more than 100 schools as a children’s book author, Tim got an up-close look at what kids were eating. He created Truck Farm Chicago, a farm-on-wheels project that connected kids to food for three years. Currently, he’s Camp Director at Nature’s Farm Camp and his cooking partner with The Kids Table.

Tim hails from Chicago’s North Shore and also taught skiing to kids in Colorado, golf in North Carolina and was a camp counselor in Georgia. He’s tutored with several organizations, served on a Local School Council and was a board member at The Academy for Global Citizenship.

From a scene at a high school on the west side of Chicago:
“No, flipping way! That is not a tomato!,” shrieked a young teen, as she pulled off her blindfold. “I hate tomatoes, and this tastes awesome. I want another!”

“What do you mean they were domesticated in Central America. I thought tomatoes came from Italy?,” said a nearby student. 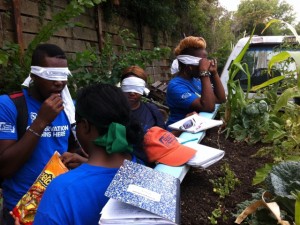 From another kid a few minutes later reading the ingredient list: “Ferrous Sulfate, Thiamin Mononitrate, Riboflavin, Folic Acid,…” Even though the student had eaten Flaming Hot Cheetos as a daily ritual, the words came out awkwardly. Note: it takes several minutes to read the entire ingredient list.

We had brought Truck Farm Chicago, our bio-dieseled power farm-on-wheels for a few lessons. 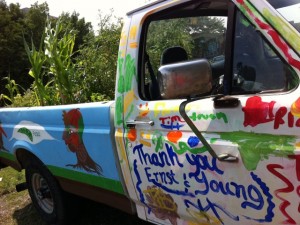 For three seasons and more than 200 visits, Petunia (as we called the Truck) was a useful prop that lent itself well to food-related programming. We received plenty of compliments from adults who would often say, “it’s great you’re getting kids to learn to make better choices.” The question we kept asking ourselves: “Is it enough?”

Often, pulling out of the school parking lot, we’d debate, “Is it right to ask the kids to make better food choices when the odds are stacked against health?” Despite an uproar from parents and community members who care about health, ‘cheap’ pizza and fries (loaded with fat, sugar and salt) remain the de facto choice in cafeterias. For many, nachos and cheese are the breakfast of choice. When chips and soda are ever present (and just pocket change), what is a ten-year-old going to choose? Kids consume empty calories, processed food from the industrial system because it’s ‘cheap,’ nearly addicting and brilliantly marketed. The costs, like pollution, toxins, and diet-related diseases such as diabetes and hypertension are ignored, or come later. 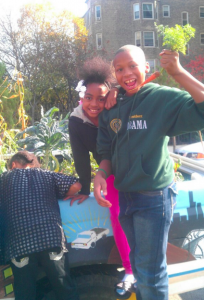 It got me thinking. In an ideal world, good, clean, fair food would be the de facto choice. Schools would source directly with local farms. The kids would know the farmers and vice versa and food would be integrated into their education, as opposed to on the side and separate from their daily subjects. Outside of school, families would have the time, energy, skills and money to cook. Each meal would support the health of people, economies, communities, and ecosystems. Potlucks would happen all over the place! Was I dreaming? Clearly there are obstacles, but what about an interim solution that would help remove obstacles and create leverage to make change? Could we create a place that showed what’s possible?

Well, it came to us after one particular visit. “Us” was Elena Marre of The Kids’ Table, cooking partner in our Truck-FARM-TO-Kids’-TABLE school programming and me. As teachers were shepherding kids back to class, one of the students said, “I want more of this. More farming and more cooking.”

So, Nature’s Farm Camp was born. It’s a chance to fully immerse kids in all things food. A summer camp where food is at the center of programming. Where delicious, nutrient-dense local food is the de facto. Where kids craft each meal and get to explore different tastes and textures. The classroom is the kitchen and so are the farm fields (and so are the forest and the creek, where the kids roam and explore). We welcome children from all over Chicagoland, offering scholarships and financial aid to as many as possible.

We’re only embarking on our 2nd season of Nature’s Farm Camp, but have begun talking with other summer camps about how to integrate local, nutrient dense food into their food service. Better yet, the USDA hired a full-time staffer who’s sole responsibility is evolving and growing the farm-to-school program for the Midwest. Whoo-hoo! Here’s to making awesomeness for all kids the de facto!

If you would like to support the mission, email Tim and Elena: info@naturesfarmcamp.com 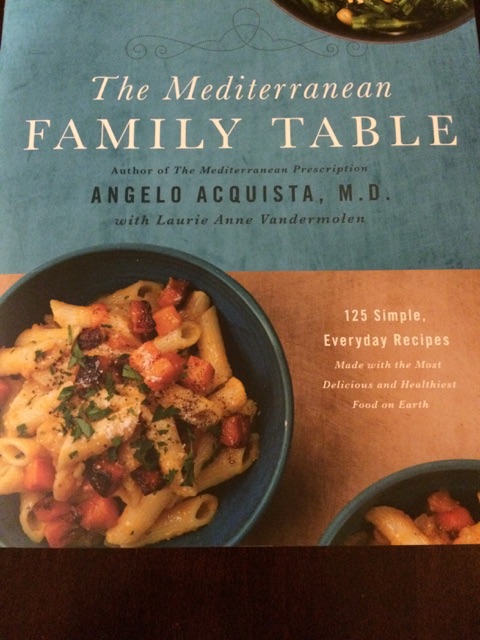 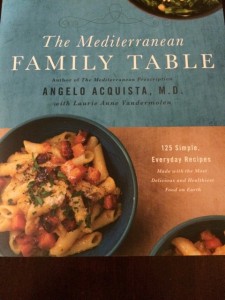 I’ve read for years that the best diet we should all adopt is the Mediterranean diet. But how do you wrangle a family into accepting a diet change? The Mediterranean Family Table is exactly what I need to get my family going. 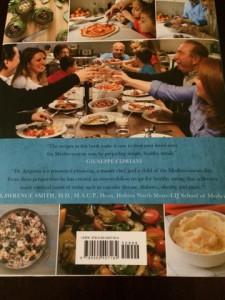 Olive oil is already our best friend, but these recipes incorporate healthy Mediterranean staples like tomatoes, fresh bread, and pasta. Enter below in a drawing to win a copy of The Mediterranean Family Table: 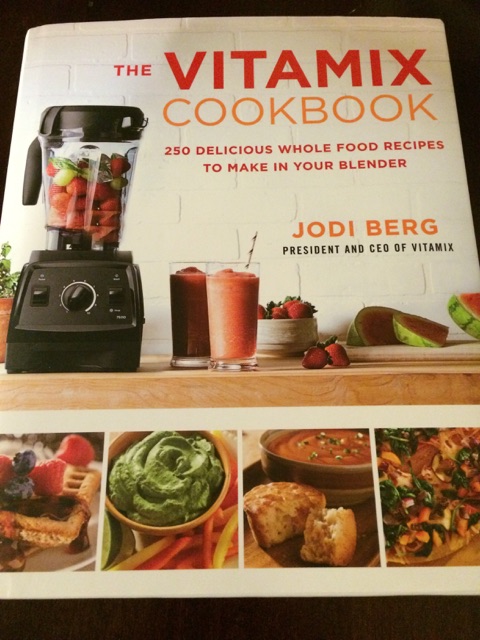 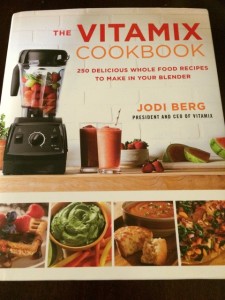 I’m continuing our fun cookbook giveaway to celebrate Thanksgiving. Today’s selection is The Vitamix Cookbook. Stay tuned — I’ll be giving away some additional brand-new books over the next week!

Do you have a Vitamix? I do not, but don’t feel sorry for me. I do have a stick blender and a food processor, which I love.

I received this amazing brand-new Vitamix cookbook, which I KNOW you want. You can make things that you never even knew were possible using the Vitamix. Those include nut butters, bread dough in addition to sauces and juices. 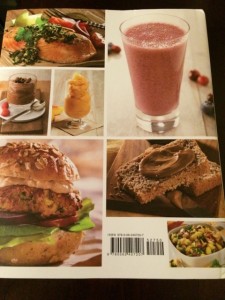 Enter below in a drawing to win a copy: 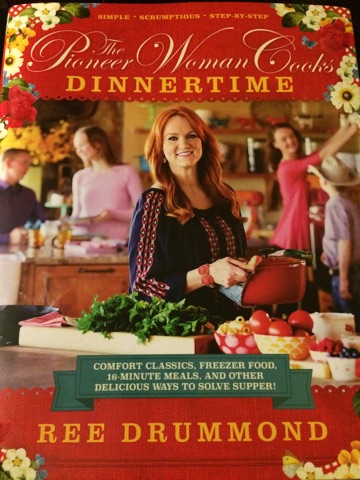 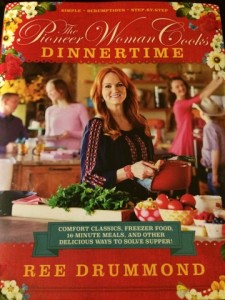 I’m continuing our fun cookbook giveaway to celebrate Thanksgiving. Today’s selection is The Pioneer Woman Cooks: Dinnertime. Stay tuned — I’ll be giving away some additional brand-new books over the next week!

I’m super excited about this cookbook The Pioneer Woman Cooks: Dinnertime: Comfort Classics, Freezer Food, 16-Minute Meals, and Other Delicious Ways to Solve Supper! by Ree Drummond. I love how easy-to-make and approachable her recipes are and that they feel accessible by anyone. 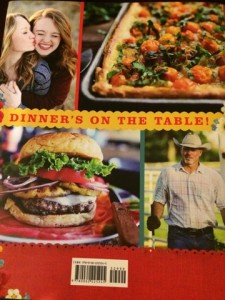 Dinner can be a big struggle for most families — mine included. Many of these recipes feed a crowd so if you have a big family or you entertain family, this book would be perfect for you!

Please enter below for a chance to win: 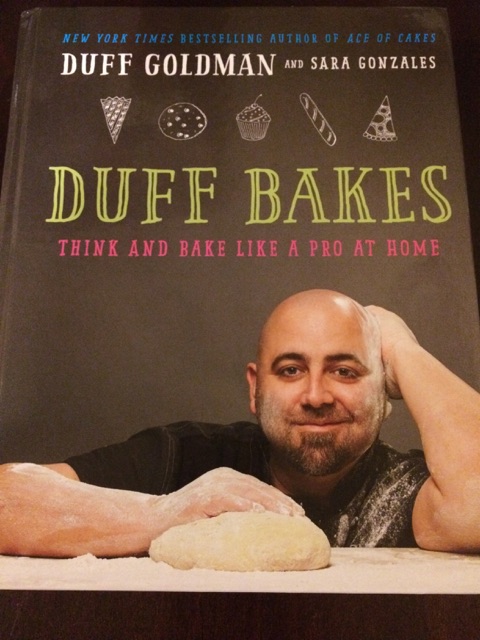 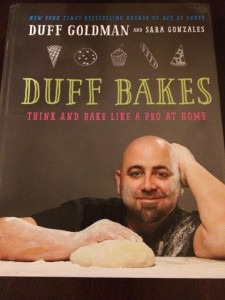 Today I’m launching a fun cookbook giveaway to celebrate Thanksgiving. Today’s selection is Duff Bakes. Stay tuned — I’ll be giving away some additional brand-new books over the next week!

Do you bake? I’ve been slowly re-learning how to bake as a gluten-free person over the past almost four years. This cookbook showed up on my doorstep and I was impressed right from the start. Duff Bakes: Think and Bake Like a Pro at Home is for both the beginner as well as the seasoned baker. The first part of the book provides some refined basics for new and established bakers and, as the book progresses, the recipes get more complex. There is even a section for vegan and gluten free bakers and then it ends on super fancy fondant cakes! I was pretty bowled over by that part — I’m so not there yet, but maybe this book will help me learn! 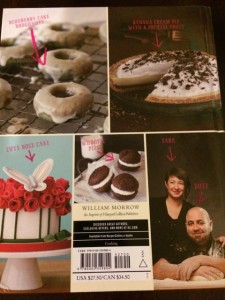 Would you like this book? Enter my raffle below to win: 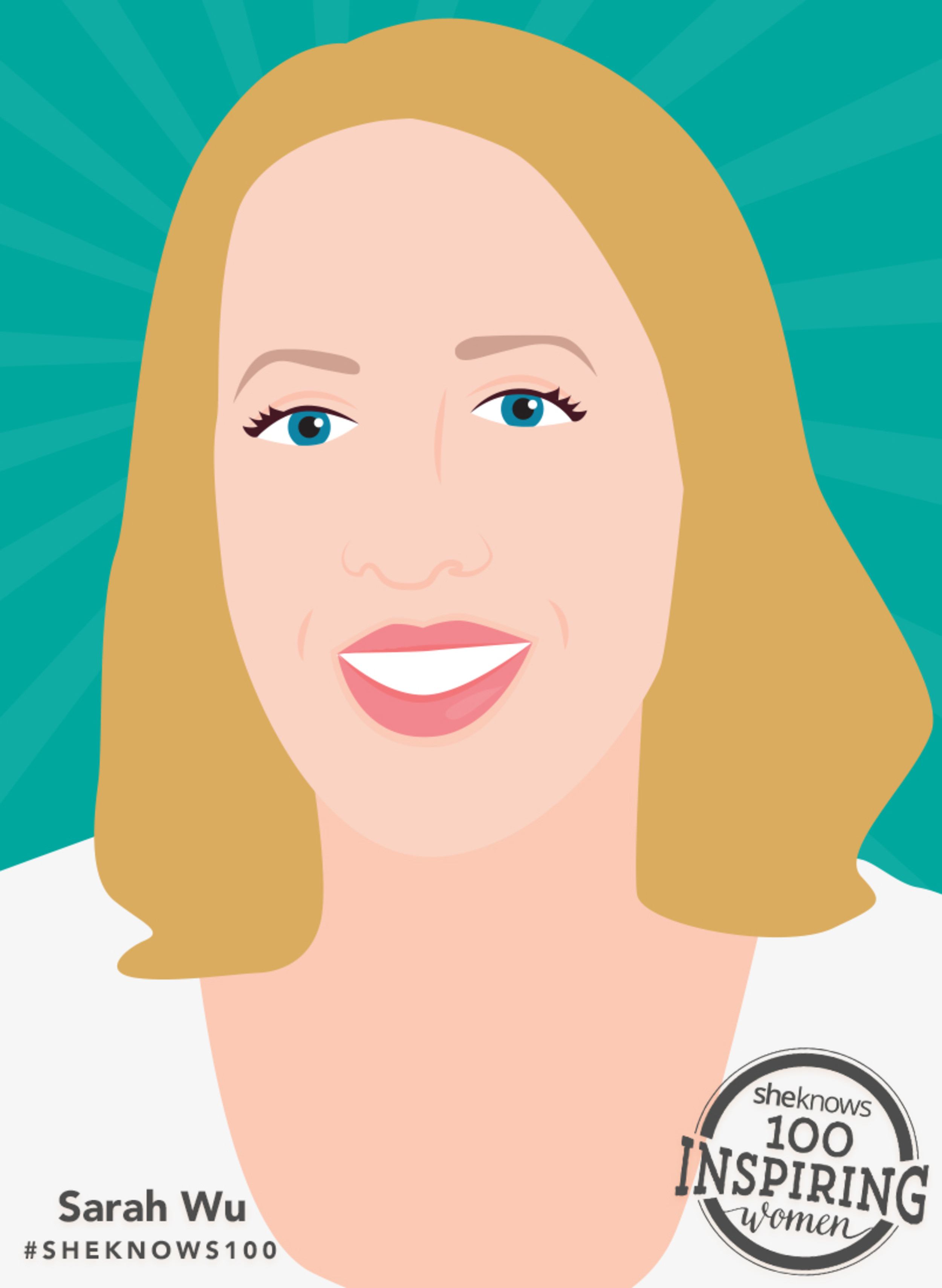 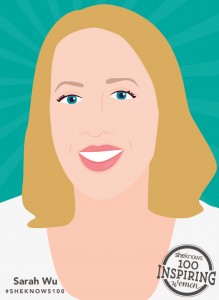 Last week I was honored to be named as one of 20 Inspiring women who are changing the way we eat (I’m #7 when you are scrolling through). I feel especially flattered because I’ve had to kind of back off of an active role in the food movement (working full-time with a family).

Then WGN Radio interviewed me: Blogger Honored For Food Activism At Public Schools. If you want to hear my voice, click over for my quick interview!

Thanks for being supportive of my journey! 🙂