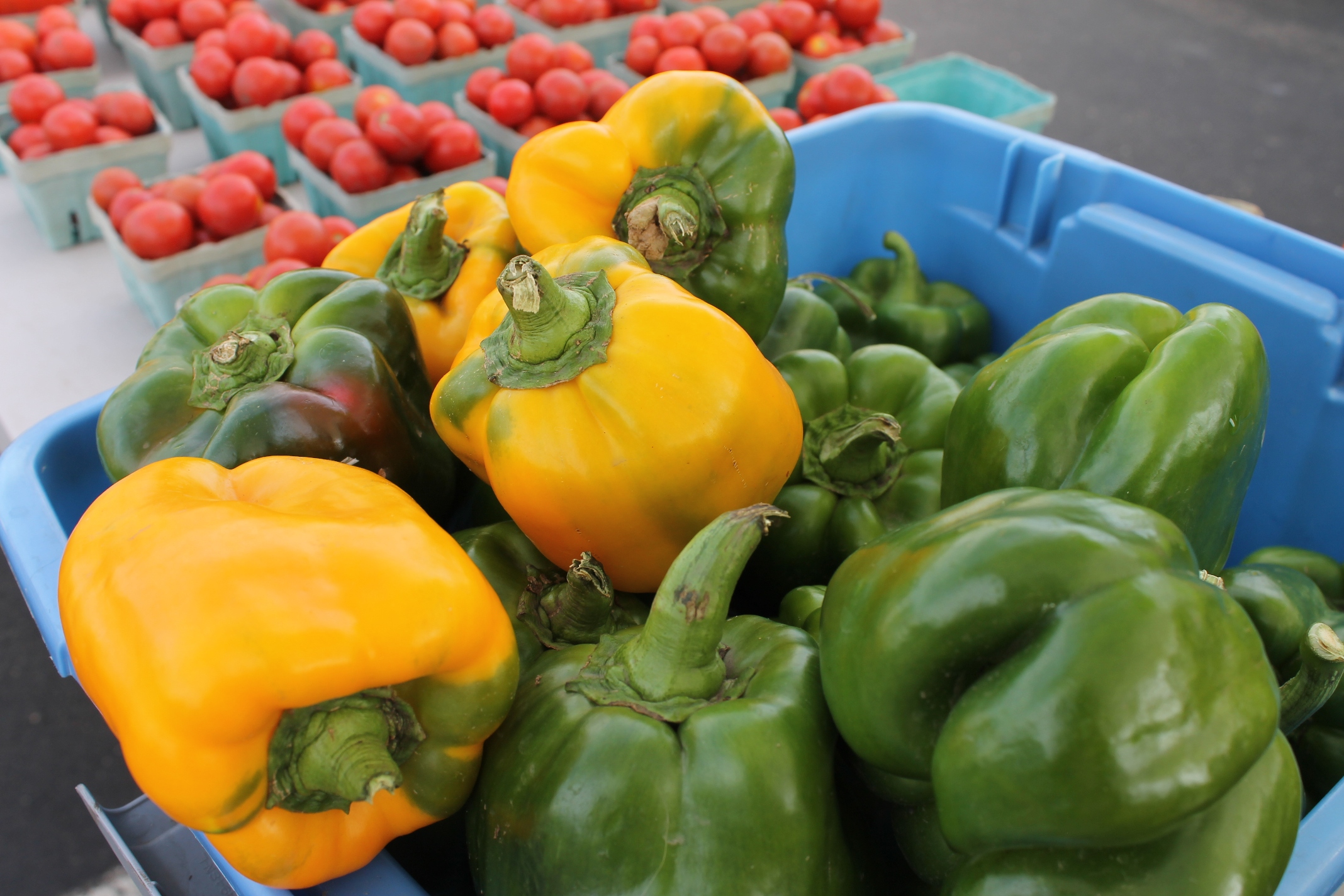 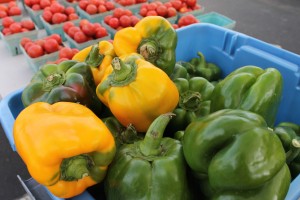 A shot from last weekend’s farmer’s market. Those peppers were $1 each…

Thanks again for your comments on last week’s post. Things are better on the eating-all-your-dinner front. I think I’ve realized that Charlie is going through yet another growth spurt. One day this week he ate a huge breakfast, lunch, and dinner — like full adult portions. My mother has noticed that he is getting taller — and I have, too. So I just feed him and he eats, some days more than others. The end…I guess. For the kitchen, My husband and I want to get a Learning Tower, but the cost is on the high side to say the least. So we wait.

I didn’t get any new questions this week, but I dug up an old one from my email:

Q: I picked up up some salad ingredients to last my household for the week.  I headed to a local wholesale store, where I gathered an armload of fresh, delicious Romaine lettuce, Roma tomatoes, assorted bell peppers and cucumbers.  With all these vitamin-enriched, low-calorie, low-cost foods, I made my way to the terminal with the shortest line, where there was one family in front of me.  Upon closer inspection, I noticed that these people were buying nothing but large quantities of Gatorade and ice cream for their kids.  If that wasn’t disgusting enough, they had a total of $50 for all this refined sugar, which they paid in full using food stamps.

To say the least, I was appalled. I did some research into this issue and discovered that there is little to no regulation on what people can buy with their food stamps.  Is it so unconstitutional for me to not want my tax dollars to pay for them to get diabetes, so that I can pay more in the future for them to get healthcare?

I’d like to get more involved in fighting this issue but I do not know who to go to first.  I figured you may be able to point me in the right direction.  State legislature?  Federal legislature?  Start small or big?
________
A: I am not an expert in food stamps (Supplemental Nutrition Assistance Program — SNAP). It is a highly political issue (just like school lunch) because it is a huge government program. Forty-six million people rely on food stamps and qualifying is actually pretty tough. There are people who can’t put food on the table and don’t qualify for food stamps because they “make too much.” On the other hand, there are people who abuse the system (under 5% of people). I think what bothers the reader above is not the fact that Gatorade or ice cream were purchased — I bet that if the people had one Gatorade and one container of ice cream there would be no email to me. It is that they bought what sounds like a lot of Gatorade and ice cream — $50 worth.
First, while I do sneak peeks at what people have in their grocery carts and sometimes I do have to stop myself from gawking, I think we definitely need to step back and make sure we aren’t judging too harshly. We don’t know what was going on here. Was it a big family birthday party? Did they combine all of the kids’ birthdays into one big bash? We don’t know the whole story. Also you never know when it’s going to be you on the receiving end of government help. You might get a divorce, lose your home, or lose a job. Life happens.
Second, what I’ve found is that most Americans don’t have a clue about nutrition. In their defense, where are they supposed to learn? In the home? We are going on three generations of convenience food. My grandma cooked from boxes as did my mom — until she taught herself how to cook in the 1970’s. I’m so thankful for that. I am in my mid thirties and I’m still teaching myself how to cook. What about nutrition education? There is no such thing. So if you don’t get it at home and you don’t have access to nutrition education or cooking classes, you are at the mercy of corporations who want you to buy their products. They spend millions and millions of money on ad campaigns. The answer is more education. It doesn’t have to cost a lot of money, either. A lot of people don’t realize the resources available at the library. I remember telling a mom that the library close to the school had more than just books — it also had CDs and DVDs. She was totally floored. Anyone can check out a big stack of cookbooks and teach themselves how to cook or they could go to the community center and inquire about free programs — but they have to know about those resources. That’s where education comes in.
Third, many local and state governments are taking a closer look at what people are buying with food stamp money. There have been numerous attempts to ban soda, chips, and candy across the country. In some places, those bans have failed because of lobbying by corporations who want federal money to be at consumers’ disposal. If you feel strongly, write your representative. Personally, I think soda is one of main culprits in the large increases in obesity over the past thirty years and I’d like to see it be banned. You can only eat so much candy before you have a terrible feeling your tummy (I call that sensation “gut rot”), but soda? You can drink a ton of empty calories and really not notice.

What are your thoughts on this controversial question? What did I miss in my answer?