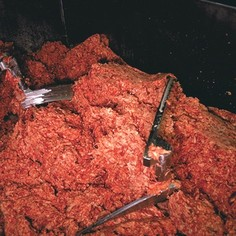 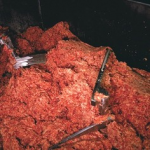 Last week it came out that the USDA is looking to buy 7 million pounds of “pink slime” for school lunches. If it sounds like pork spending, you’re close. It’s the ammonia-treated trimmings of beef left on the bone that has to be processed to be “edible.” Basically, it sounds weird and vile. Even worse? I most likely ate a lot of it in 2010.

The intrepid Bettina Elias Siegel of The Lunch Tray started an online petition to ask the USDA to stop buying “pink slime” for school lunches. She wrote:

“Pink slime” is the term used for a mixture of beef scraps and connective tissue (formerly used only for pet food and rendering) that is treated with ammonia hydroxide to remove pathogens like salmonella and E coli.[…] Even apart from safety concerns, it is simply wrong to feed our children connective tissues and beef scraps that were, in the past, destined for use in pet food and rendering and were not considered fit for human consumption.

Due to public outcry, fast food giants like McDonald’s and Burger King have stopped using pink slime in their food. But the federal government continues to allow its use in school food and has just authorized the purchase of ground beef which collectively contains an additional 7 million pounds of pink slime for consumption by our nation’s children.

Of course I signed the petition and so have more than 150,000 people. Not only do I want to see “pink slime” removed from school cafeterias, I think any kind of ammonia-treating-meat process should be permanently stopped nationwide. I don’t use ammonia-based products to wash my floors much less use to rinse off animal flesh for my child’s consumption.

The meat industry has also taken note of Bettina’s petition and issued these statements:

Boneless lean beef trimmings (BLBT) is a safe, wholesome and nutritious form of beef that is made by separating lean beef from fat.[…] One process uses food grade ammonium hydroxide gas, something commonly used in the production of many foods, to destroy bacteria. Whatever process is used, it is all done under the watchful eye of USDA inspectors and according to strict federal rules. Lean finely textured beef is blended into foods like ground beef. Producing BLBT ensures that lean, nutritious, safe beef is not wasted in a world where red meat protein supplies are decreasing while global demand is increasing as population and income increases.

I like not wasting and of course meat supplies are costly. I don’t think that Bettina is trying to say that she doesn’t understand the spirit in which this is being done. The meat industry is wants to get every last snippet of beef and gristle to market. Go ahead and rescue all usable parts of the cow – but try to skip ammonia and don’t give them to my students.

I have to wonder though… if the USDA goes ahead and disavows the use of “pink slime,” what will replace it? Another flavor of slime?

As a speech pathologist, I work to correct speech behaviors. I can’t just tell a kid to stop doing something cold turkey; I have to have an alternative behavior at the ready. So instead of stuttering at the beginning of a phrase, we’re going to try as easy onset. Or instead of giving me a blank look when I ask a question, I might teach a kid it’s ok to answer “I don’t know” (Seriously, so many kids don’t think it’s ok to say they don’t know the answer to something – just a reminder to all of us: it’s okay not to be perfect).

So, USDA? If you read my blog, I’m going to suggest that instead of ammonia-rinsed beef that you purchase more beans. How about 7 million pounds of beans? Beans are already a USDA-recognized protein and we already know that we need to be eating more plant-based protein. Hey, I love meat and eat beef about once a week (chicken, turkey, bacon, and sausage round out the week). But we all should be trying to eat less meat for our health and for the health of the planet.

My mom makes amazing black bean vegan “quesadillas” and, although I haven’t quite been able to replicate her recipe in the kitchen, they would be perfect for school kids. Just add some cilantro grown in a school garden or some chopped tomatoes in the school’s salad bar (salad bar update coming soon!) and “pink slime” would be but a memory.