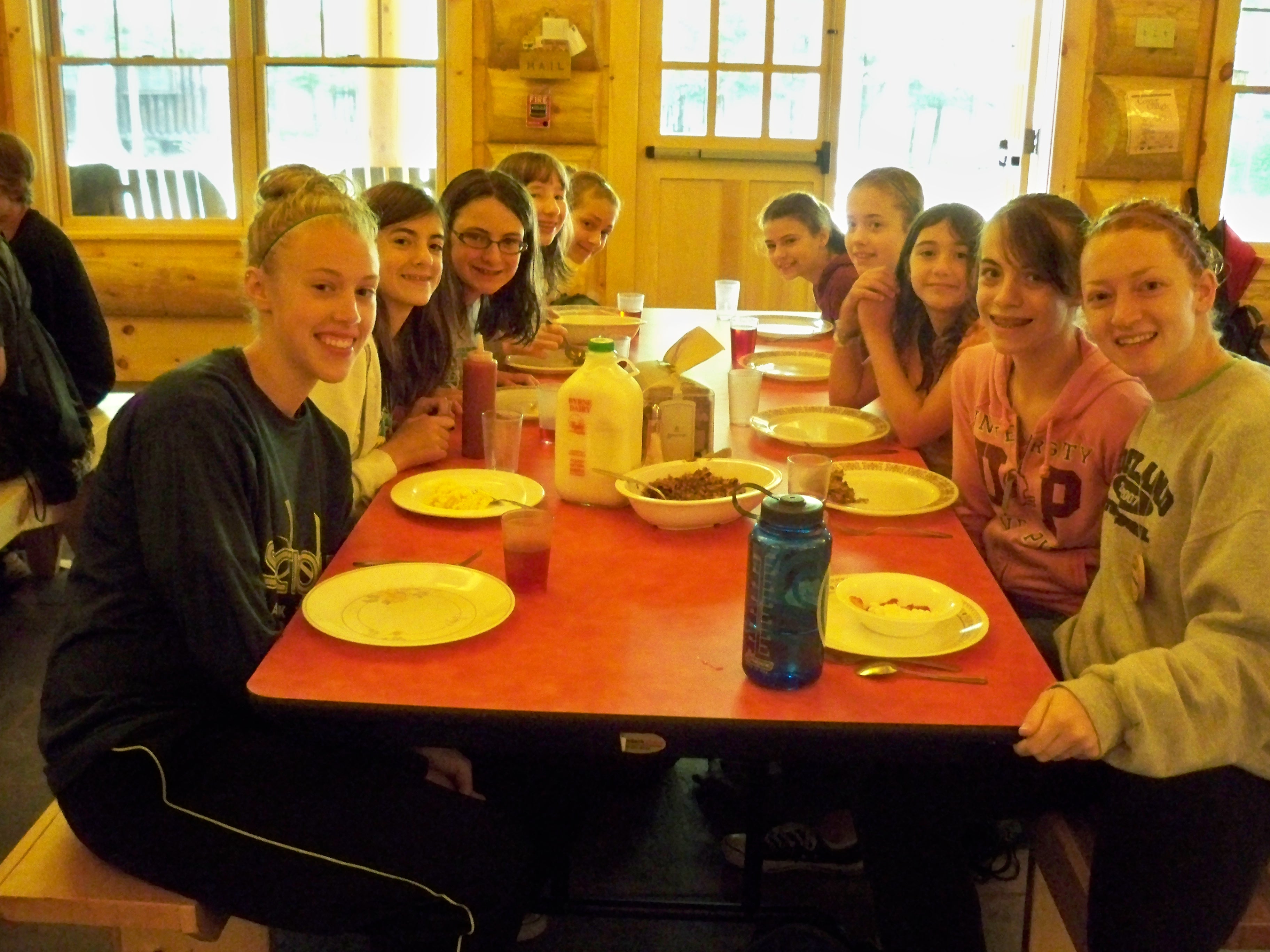 Jenna Cowan White works for Fowler Camp and Retreat Center in Speculator, NY.  In the “off” season she teaches Family and Consumer Science to middle schoolers, helping them to examine their own food choices and how they impact the world around them.  Jenna lives with her husband, newborn daughter, Murphy the dog and a handful of chickens in upstate NY.

After the last bell rings, school’s out for summer!  And what do the kids do?  Many of them participate in a rite of passage…summer camp.  From Maine to California kids travel in droves to camps that last for a week, a month or the whole summer.  One of the major stigmas in summer camp circles is the idea of “camp food”.  It becomes the butt of many jokes, it is sometimes unrecognizable and often scores low on the “tasty” scale.  Camp food is less stringently regulated than school food, which leaves many to wonder…what are our kids eating at camp?

Having worked at summer camps for 25 years, as well as six years teaching outdoor education at camps during the school year, I have eaten A LOT of camp food. 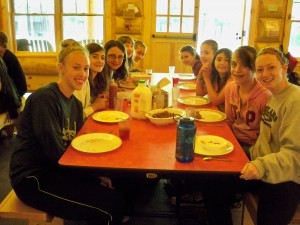 There is a prevalent cultural habit of treating unhealthy food as a reward.  When we go to a birthday party we have chips, cake and soda, if we eat all of our spinach we can have a cookie, when we go to summer camp it’s vacation so let’s have chicken nuggets and tater tots, hamburgers and fries.  All this just leaves us feeling miserable. Eleven years ago I decided I’d had enough.  I had come to the realization that if I was feeling so bad after eating this food, what could it possibly be doing to benefit our campers?

So I wrote a proposal to our camp director that outlined some ideas regarding transforming our summer kitchen into more of a whole foods kitchen.  Some of these ideas included eliminating “bug juice” from the menu (you know the kind, open packet and add water to find some gloriously colored beverage appearing before your eyes), taking out half of the desserts, offering a full salad bar at every meal and always having fresh fruit available.  The camp director seemed intrigued with the idea and it fit perfectly with our larger camp ideals and goals, so his response was “let’s give it a try!”   His next question was, “do you want to be the cook next summer?”

I replied with an emphatic “Yes!” that was also filled with nervous excitement because I knew the task was a large one.  We feed an average of 200 people a week three meals a day.  The task was more than just changing the food on the plate, it was also changing the way people thought about the food and the role food plays in our lives, even beyond their time at camp. 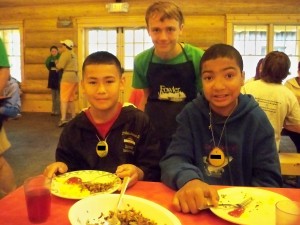 School lunches and summer camp food have become so institutionalized that people who run these kitchens don’t necessarily need to know much about cooking (not to say they don’t, but they wouldn’t need to) because it’s as easy as add water, stir, and voila!  I really wanted to actually make the food.  Nourishment is so much more than filling the belly and I wanted to serve food that I was proud of, that I’d put heart and sweat into, and that I could stand behind proudly.  This does not come in a box.  We’ve been able buy the majority of our whole foods ingredients from a natural foods supplier and use our typical food service supplier for items that are just too far out of our budget or unavailable from the whole foods supplier along with some basic food service needs (i.e. plastic wrap, etc).

Each summer over the last 10 years we’ve been able to increase the amount of whole foods offerings.  There were multitudes of people who thought I was insane and didn’t think this would work.  People have been surprised to see that not only does it work, but kids and staff alike LOVE it and are noticeably healthier for it.  The camp nurse reports that the number of campers coming in with stomach aches and intestinal complaints have all but stopped.  Summer staff have been able to better sustain their level of energy through many difficult weeks of work.  The food budget actually decreased.  We are able to handle a multitude of food related allergies with relative ease because we know exactly what goes into the food, and can easily take something out if we need to.  Here’s a checklist of the specific changes in the way we do food over the last 10 years.

We have made great strides in our food service in the last 10 years and we are very proud of what we serve.  I am always amazed when I talk to people who just don’t seem to understand how important real food is.  Two examples come to mind.  In my second year cooking at the camp I was having a conversation with a local restaurant owner who couldn’t believe that we used real potatoes for mashed potatoes.  He kept telling me about instant potatoes in a pouch and all you have to do is boil in the bag, cut open and serve.  Forget the food atrocity happening here, where is the feeling one gets from a hard day’s work with satisfaction on a job well done? 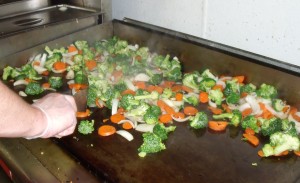 The second example is from this past summer.  I was taking a tour of another camp kitchen.  The food service director was asking me where I  found my recipes and I told her I generally take recipes from my own kitchen and multiply them.  She went on to tell me that she found an old box with army food recipes from the 1950’s and to this day they use these recipes.  She claimed that the cook they hired last summer was too creative and bought all sorts of spices that she threw away this year because “kids don’t like spices” and “they won’t eat things that aren’t hot dogs and tater tots”.  I beg to differ. Our campers enjoy spices in their homemade spaghetti sauce, in their taco (turkey) meat and beans, they love the tofu wings (served as an alternate option to chicken nuggets) and they beg for tofu potpie. 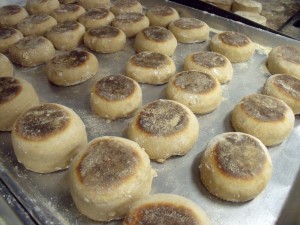 We need to give kids more credit and we need to give them the opportunity to eat and enjoy healthy, real food.  We certainly aren’t perfect and I don’t claim that we do everything right, but we are certainly on the right path!  When people come to our camp, the food is not the butt of jokes.  Campers look forward to the food because they know it will not only taste great, but also is made thoughtfully and nutritiously with their best interest in mind.

It’s no secret that our nation’s food system needs to change and there are some high profile people who have brought the issues of our failing food system to the forefront of the public spotlight.  However, I truly believe that it is the daily efforts of regular people in regular places, in their own corners of the country that are going to make the most difference.  If only 10 people each summer go home from our camp thinking differently about food and making some changes of their own at home, then we’ve made a difference that is rippling throughout our communities.

Thanks Jenna for sharing your experience with us — I couldn’t agree more! -Mrs Q