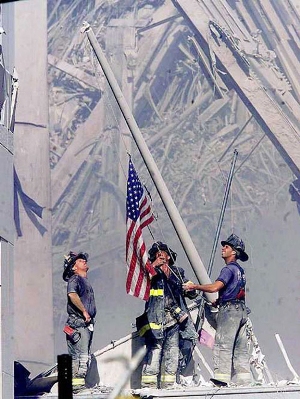 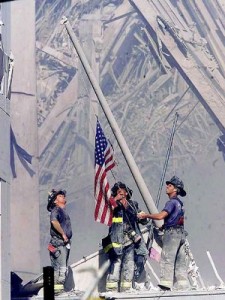 10 years. It seems like everyone says this, but September 11th changed me. I was lucky that I didn’t lose a loved one, but I lost my innocence and my faith in the basic decency of people. Here’s my story…

Many years before 2001 when I graduated from high school, my graduation gift was a trip to New York City with my mom. I had wanted to attend New York University, but it cost too much money and the idea was eliminated before I even asked. Instead we chose the state school that generations of my family have attended and we all hold dear.

I wanted to go to NYC because I had never been there before. I had never traveled to the east coast, never visited Boston or Washington DC. New York City was the obvious choice as a destination because, well, that’s where everything happens. Just like now, I loved to travel (but I hate to fly). It felt so special to me to have my mother to myself. That was the summer my parents divorced.

Although I read a little about New York from the guidebooks I checked out of the library, I didn’t know about the World Trade Center buildings. I associated New York with the Empire State Building. Because I’m mildly afraid of heights and slightly claustrophobic, we didn’t go up into any high sky scrapers. Instead we walked everywhere. My favorite place was Greenwich Village. My mom bought me a black leather motorcycle jacket at one of those leather shops. I was not a rebel, but I wanted to be older, tough. I put on the jacket immediately and I felt fierce. My mom snapped a picture of me standing on the corner of a hot New York City street with the too big jacket on and wearing shorts as it was the summer. I’m whipping my hair out of my face and smiling. Happy days.

Fast forward to 9/11/01. Weirdly, my mom was in New York, Manhattan even. Remember Y2K? My mom holed up in my rural hometown that New Year’s Eve and told my sister and I, “I’m safe here and far away from any possible chaos.” Y2K fizzled out and everyone was fine. But 9/11? She was in Manhattan.

That morning I was driving to work on the highway, buzzing along in my car listening to the radio. I liked one of those morning radio stations that the hosts were super dumb. Two airheads talking about fluff news and meaningless topics. They annoyed me but I still kept listening because it was the “cool” radio station.

The airhead hosts mentioned a plane hitting the WTC and I shrugged at how odd that was. Some wacky, inattentive pilot. Of course I wasn’t in front of the TV, but the airhead hosts had the TV on. I’ll never forget their narration. “There’s another plane….[pause]…oh….it just hit the other tower.”

The moment of realization.

I sped to work, driving as fast as I could. This was a time before widespread cell phone use and I didn’t have one. I need to get to a phone. I needed to call my mom.

Thankfully, when I got to work, I found a message waiting for me. It was from my mom. She was fine and had called right away, before the phone lines jammed. She knew I would be terrified.

I don’t remember much of that day. Just silent images. My coworkers crying, hugging. The TV being set up and catching little bits and pieces. The horror we felt when the towers came down. I talked to my mom on the phone that night. What she saw changed her for life. I cried every day for at least a month.

September 11th taught me that you have to live for the now. I learned from that day that while there will always be just one September 11th, everyone has terrible lows and tragedies happen in their lives. The death of loved ones, unemployment/job loss, bankruptcy, car accidents, and cancer are crippling blows. Impossible, improbable events we think we cannot get through. But somehow we make it to the next day.

Living isn’t always easy, fun, and happy like TV and magazines want you to believe, but instead it’s often complicated, upsetting, messy, depressing, and exhausting. We have no choice, but to keep moving forward for the family we love and for the friends we cherish.

In case you were wondering, I cannot listen to those twits on the radio anymore. I tried once. I found there pointless banter to be grating, but mostly it just takes me right back to that day.