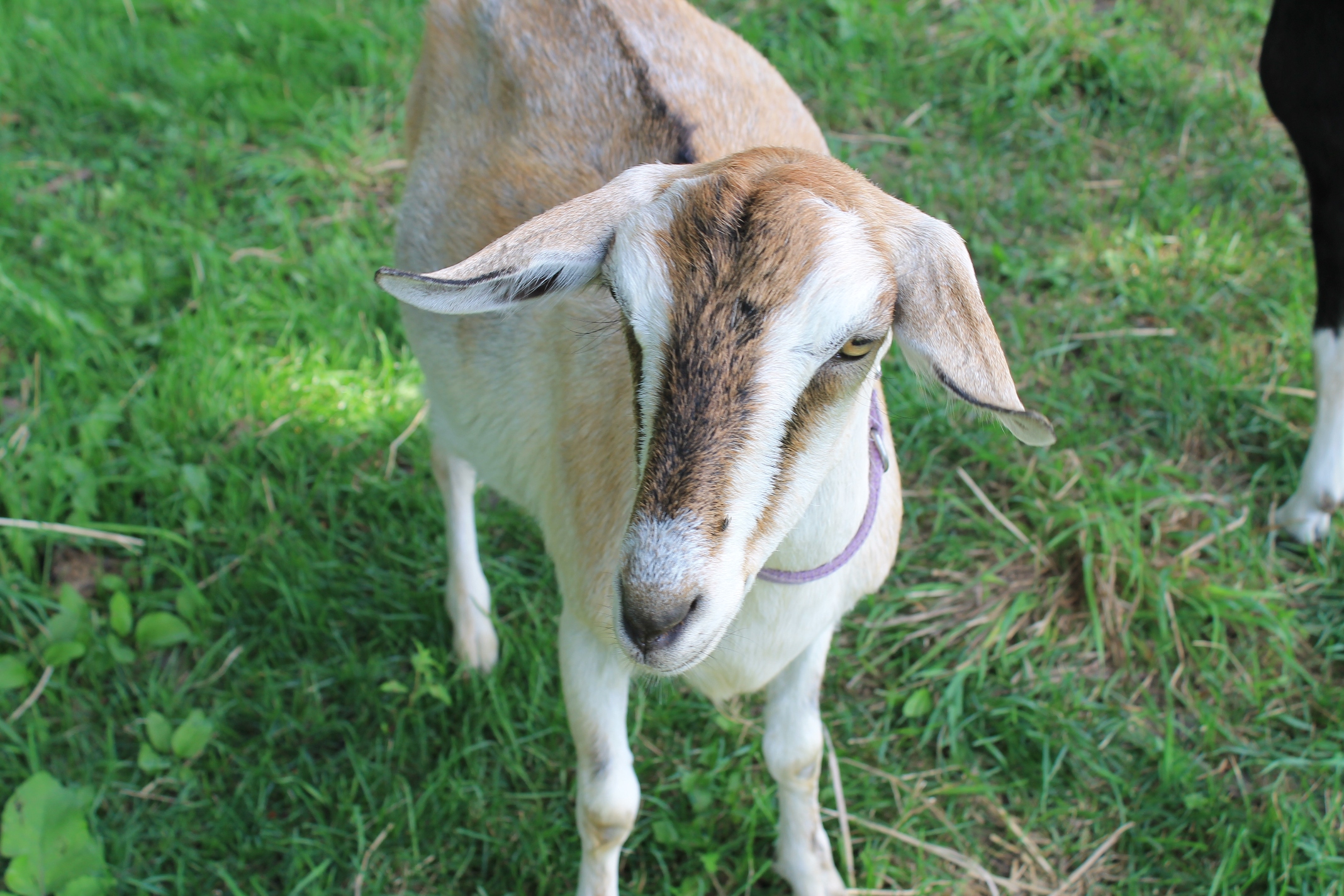 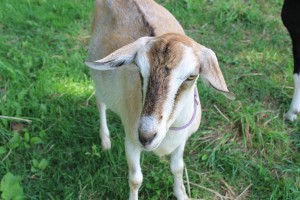 Close Encounters with the Goat Kind

This summer we took a trip to a farm that is affiliated with our CSA. I found the experience to be life-changing.

But first, a little background. Before I started this blog, my son was very sick. He was getting ear infections every two weeks. He had a constant runny nose and a rattle in his chest. No one was sleeping. I started the blog after the Christmas where we took him to the ER twice. Throughout the first month of January 2010 when I was eating school lunch, my son was eating day care food and was ill all the time. Finally in February 2010 he had ear tubes put in. I thought they would be the magic cure I had been waiting for. They weren’t (but they can be for a lot of families — listen to your doctor).  My son continued getting ear infections, though they were occurring less frequently, averaging once per month. By age 16 months my son had had eight ear infections and eight rounds of antibiotics.

In April 2010 I talked to my doctor about taking my son off of cow’s milk. Our pediatrician, who I adore, told us that the cause of my son’s troubles was child care and not the food. I couldn’t ignore what I thought was going on with my son, especially because I had started this blog and discovered that food really did have an effect on people. My son was already drinking lactose-free cow milk. One of my friends mentioned goat milk to me and I found some at the regular old grocery store. I compared the nutritional facts between cow milk and goat milk. The milks are virtually identical in nutrition (goat’s milk is slightly lower in fat content), but goat milk costs around $4.00 a quart. I thought I’d give it a try in spite of the cost.

My son didn’t protest the change in milk. The ear infections disappeared.*

All this to say I guess I have a particular fondness for goats.

Earlier this year my husband and I were talking and I told him that one day I’d like to have backyard chickens and keep bees. He was less than thrilled, but commented, “I would rather get a goat.”

I thought that was a strange idea because a hoofed animal strikes me as way more work that backyard fowl and insects. But my husband was thinking about it economically: we spend a small fortune on goat milk.

When we got the flyer from our CSA saying that they were offering a two-hour session onsite entitled “Making Goat Milk Ice Cream,” I highlighted it with a bright yellow. It would be something that my son would enjoy as he loves animals and farms and, the best part, he could eat the fruits of his labor without worry.

Weeks later we drove to the farm. We were in the car for a very long time. I had to use my phone’s GPS when we found ourselves on a dirt road. I was sure it couldn’t be that rural. We almost drove right past a field with lines and lines of produce just coming up. That green stuff was headed for my CSA box! 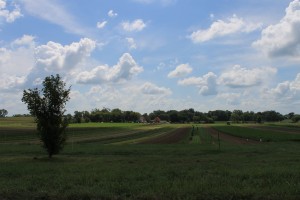 Who wouldn’t fall in love with a farm like this?

We got a tour of the farm and the animals. At first I was interested. We all enjoyed hanging around in the little goat paddocks letting the goats come up and sniff us. A goat even tried to eat my small metal key chain that I had left hanging out of my pocket. They were curious, friendly, and ready to eat anything — really endearing animals. But after about an hour, I was getting a little impatient. I was there to milk a goat. This was a relatively short session and I wanted to have plenty of time for goat milking. Luckily my son and husband were enjoying themselves and were unaware of my getting slightly annoyed at the wait.

At least the goat milk we were about to use to make the ice cream was from the goats that we met — the farm has pasteurizing equipment. I had been interested in maybe trying raw goat milk, but that was not going to happen. Why would I want to try raw goat milk you ask? Because people like me (who have figured out they can’t drink any kind of dairy product without having “problems”) sometimes respond well to raw goat or cow milk. It’s great that my son can drink goat milk from the store and be ok. Me? I realized that my body gets mad at both cow and goat milk. Frustrating. I miss dairy and I’m only dairy free because I don’t want to be in the bathroom all the time (like I used to be).

We settled in to make the ice cream and I noticed the instructor bringing out goat milk, a huge jar of honey, and organic cow’s milk heavy cream. I pulled her aside and mentioned, “I thought there would be no cow’s milk products when I signed up for the class.” She said, “Well, goat milk doesn’t have enough fat in it to make cream. So we use organic heavy cream.”

Oh boy, I thought. Well, now our son is going to have trouble with this ice cream. My husband told me to relax and I tried to shrug it off.

After we got everything going with the ice cream machines, we went outside to the barn to milk the goats. The guide instructed us that milking a goat is not like what you see on TV when people milk a cow. She told us we had to pinch with our thumb and forefinger and then squeeze with our remaining fingers, sort of like wrapping the other fingers around the teet. No pulling down.

My son was so excited seeing all of the adults and kids moving their hands and learning the correct hand motion that he was practicing, too. I looked down at him moving his hands and I had to snap a shot of his adorable attempts. 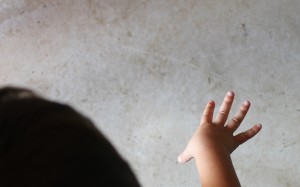 Finally, it was our family’s turn so we went up to the goat. The instructor held the goat’s rear hooves. My husband milked the goat, my son got the hand movement right and milked him too! I was shocked and a little choked up. Then it was my turn and I didn’t get it right. I was trying to milk a cow I guess so the instructor reminded me “pinch and squeeze” and then I got it. Yeah me!

When we finished milking, the group went back to get the ice cream, bowls, and spoons. We set up on some picnic tables and the instructor started serving everyone up. I decided that I would try a spoonful and just suffer through any “after effects.” We were not going to deny our son at all. I told the instructor to “just put a little in my bowl” and she obliged.

I put the spoon to my mouth. I tasted the ice cream. The rich taste of dairy swirled in my mouth and oh the honey. It was dark and and astonished my last taste bud.

It was the best ice cream I ever had. Immediately I wanted a second helping. And thankfully there was a lot to go around. My son had three helpings and, well, I had at least two. Maybe three. I don’t know.

I got choked up. The ice cream made my eyes water because I didn’t know that ice cream could be that wonderful. Just pure and sweet. Just thinking about that moment brings tears to my eyes.

Everything agreed with both of us. I’m still stunned. 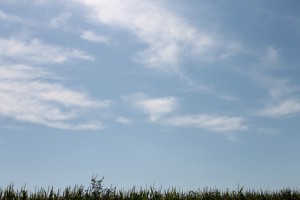 Still in the process of convincing my husband that we need to move more rural. The fact that he also thought the goat milk ice cream was divine is working in my favor!

Dreaming of my next spoonful….

*In September 2010 I took him off all day care food and cow’s milk-based yogurt and cheese. Finally in October all gluten. There went the chronic diarrhea and asthma!

10 thoughts on “My Journey to the Farm: Making Goat Milk Ice Cream”