When I went to DC for Mom Congress, I wanted to make time to meet Ed Bruske. He’s the writer, chef, and gardener behind the blogs The Slow Cook and Better DC School Food. As much as I wanted to visit the friends I have there (and their adorable families), I didn’t tell them I was in town. I really didn’t have more than one spare hour. The rest of the time I was completely occupied.

I wanted to meet Ed because we both started thinking about school food reform in January of 2010. I started eating school lunch that month here in Illinois and, in DC, he entered his daughter’s school cafeteria to spend a week learning about their “new,” “fresh-cooked” lunches. We both found out similar things: it’s all processed food.

I don’t remember how I initially located him on the Internet, but I’m sure happy to have company on this school food journey.

So I arrived in DC and stayed near Georgetown University. We scouted a secure location… 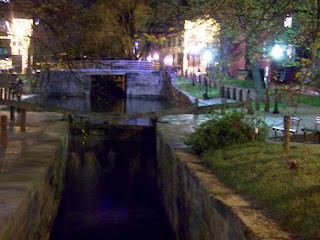 It would have been easy to miss these hidden canals just south of the Georgetown area. I imagine that years ago men in white wigs would stroll along these banks, but instead it was just two lowly food bloggers. We sat on a bench (on the right in the photo) and made sure we weren’t being followed. Luckily any spies who might have been lurking in the bushes wouldn’t have been able to hear our school food banter over the din of canal’s rushing water. Phew!

I felt like I was meeting an old friend. It was a lively conversation. I’m not sure we accomplished anything in our discussion, but I learned a lot. Ed’s a serious journalist, one that I would not want to cross! He probably walked away thinking I’m a little scattered. (I am!) I asked him if he would participate in a Q and A for the blog and he agreed. He already contributed a guest post to the project, but I wanted a little more information from him. I’m going to post part one today and part two next week. Thanks Ed!

Q and A with Ed Bruske

Mrs Q: Please tell the readers a little about yourself and how you became interested in school food reform:

Ed Bruske: In a previous life I was a reporter for The Washington Post, then I detoured into the catering business. In recent years I’ve been self-employed as a food writer and personal chef and also teach “food appreciation”—or enhanced cooking lessons—in the after-school program at a private elementary school here in the District of Columbia.

About six years ago I started what became a large and very productive kitchen garden on our corner lot two miles from the White House and subsequently built an edible container garden at the charter school my daughter was attending and became a Master Gardener. I wasn’t paying attention at all to the food they were serving in school, but I did sign on to the advisory board of a new D.C. Farm to School Network, where I learned that Chartwells—the corporate food service company that provides meals for D.C. Public Schools—had switched from pre-packaged re-heat meals to something they called “fresh cooked.”

I thought it would be fascinating to see food being cooked from scratch and coincidentally, during a meeting at the neighborhood elementary school my daughter had recently transferred to, I learned that meals were being prepared in a newly renovated kitchen. I was given permission to observe the kitchen operations up close for a week and discovered the food wasn’t “fresh cooked” at all. It was that same frozen, processed convenience food—chicken nuggets, Tater Tots, “beef teriyaki bites”—that Jamie Oliver exposed in West Virginia. But breakfast was even worse: strawberry milk poured over Apple Jacks cereal with Pop-Tarts, Giant Goldfish Grahams and Otis Spunkmeyer muffins.

I was appalled to find that kids as young as five were consuming the equivalent of 15 teaspoons of sugar before classes even started and wondered what kind of adults thought this was appropriate food to be feeding young children. I’ve spent the last 14 months traveling the country and reporting on this—including daily visits to my daughter’s cafeteria—trying to find out what’s wrong with school food and how it might be fixed.

I now write about it at my personal blog—The Slow Cook—as well as a blog for parents called Better D.C. School Food.

Mrs Q: How important is eating in your life? What does your family eat? What are your daughter’s favorite foods?

Ed Bruske: To a great extent my life and the life of my family revolves around food. Not only do I observe, analyze and write about food every day, but I am constantly thinking about what’s growing—or what should be growing—in our garden and what we can harvest to serve for dinner.

My wife and I have always had a love of food. She’s a catering chef—one of the best in the city—and we love to have friends for dinner. We don’t eat out that much—unless it’s at one of our favorite Szechuan joints or a neighborhood tavern. We like simple food, but in addition, my wife is a Type I diabetic and I am perhaps pre-diabetic. So we’ve eliminated most carbs from our diet—meaning sugar and starchy foods—and focus on meats, dairy and the green vegetables we grow in the garden. We believe in fresh, locally grown foods whenever possible and subscribe to a local dairy that delivers not only wonderful milk and cheese to our home, but also a range of beef, pork, lamb and poultry. So dinner for us might be fresh brats and sautéed collards, or it could be a spit-roasted chicken and asparagus.

My daughter is a typical kid. There’s hardly any point trying to get her to eat the way we’d like to see her eat. She loves carbs—the more the better—from chips to pasta to potatoes—as long as the potatoes are mashed. She’s very particular about her food. She rarely wants to eat what’s served at school—unless it’s pizza. She’d rather take steamed Chinese dumplings. She loved fried calamari and swoons over asparagus. Her favorite food above all is steak. But it must be a thick, fatty ribeye cooked slightly more medium than medium-rare. I bought her a book called “Steak”—all about what makes the best steak in the world—and she took it to school with her and devoured it. She adores ice cream but hates milk (she’s lactose intolerant).

Mrs Q: What are the top three things you would like to see changed about school food?

Ed Bruske: First, I’d like to see schools bannish sugar in all its guises, including flavored milk. Although the science isn’t conclusive yet (when is it ever?), I’m convinced that overconsumption of sugar—especially in sodas–is the primary reason for the current obesity epidemic as well as the various “diseases of modern civilization”: diabetes, hypertension and coronary artery disease.

Second, I’d like to see greater emphasis placed on removing junk foods from schools—whether it’s in the hot lunch, the a la carte line, vending machines, school stores, bake sales during school hours or classroom celebrations. Do we really need to mark every occasion with pizza and cupcakes? Kids already get plenty of this stuff at home or at the corner convenience store. For me, this is much more important than trying to force more vegetables on children. From what I see, those vegetables adults are so concerned about usually aren’t eaten and just end up in the trash, a waste of money.

Third, if I had a magic wand it wouldn’t necessarily shower schools with more money for food. Most cafeterias could be run much more efficiently, especially if they had better technology. The current system is just incredibly wasteful and anything but kid-friendly, layered over with so many paperwork and accountability requirements.

I think we could slash the cost of feeding 32 million children every day if we simply offered them a variety of things to eat they could choose and serve themselves—at salad bars or food bars– without an adult standing over them making sure they took one cup of grains, one cup of green vegetables, three ounces of meat. We need to engage kids more in the act of eating healthfully rather than the one-size-fits-all approach we currently use. The current system is designed by and for adults to keep the accounting straight.

Ed Bruske: As Woody Allen famously said, 90 percent of life is showing up. Parents need to at least stand up and be counted where school food is concerned. I don’t expect all of them to get as involved as I am. But it sure does feel lonely out here sometimes. The first step, I think, is to have lunch or breakfast or maybe both with you child at school one day. See what they are eating. Sit at the table and get a look at how the kids are eating their meals. In my experience, it’s pretty chaotic with very little adult intervention.

Teachers don’t want to eat with the kids because lunch is their big break in the day. So who is coaching these children to eat better? Or maybe you will have your eyes opened, as I did, about how bad the food really is in many places. It might just motivate you to take the next step, which would be to talk to introduce yourself to the lunch ladies, the food services director, and possibly seek out other parents to start a discussion group. Parents—all of us—need to become better educated on this issue first and foremost.

Next week: Part two — Ed’s experience and opinions on cooking with kids and school gardens…

5 thoughts on “Meeting Ed Bruske in DC (part one)”