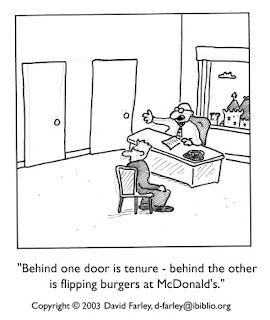 UPDATED: Tenure varies state-by-state, district-by-district, school-by-school. I am just one person. Please keep in mind there is great variability.

Tenure is a bad word these days.

But school tenure is not like tenure awarded to college professors. When someone gets tenure at work we tell that person, “Now you can’t be fired for wearing the wrong colored shirt.”

Being “tenured” doesn’t mean you won’t lose your job. Tenure assures you some protection. I don’t know the protocol, but principals have to observe you multiple times, among other things. A teacher then can request a meeting with the principal and union representation (just another teacher who is the union rep). I don’t know what happens after that.

I knew a tenured teacher who got let go. I think the person fought it, but I don’t have all the details. From what I knew, the person was an excellent teacher. It was rumored that the principal didn’t like that person.

I know untenured teachers who were let go who were excellent too. Over two different years I saw two amazing teachers receive pink slips. Why would my school drop great teachers? It was rumored that the principal didn’t like them.

And then I know a couple tenured teachers who need to go. But they are still hanging around. It makes me wonder…

Regardless, the system of tenure needs to be revised. First, in the current system going from untenured to tenured feels like going from the dark side of the moon to the light side. Why can’t untenured teachers get some protection? Why shouldn’t tenured teachers be under scrutiny? Ideally, I think that if a tenure-like system is employed, there should be incremental steps.

All I can speak to is my own experience. Since I’ve seen both tenured and untenured teachers lose their jobs, I think the removal of staff involves decisions based less on tenured status and more the political will of the administration.

Second, let’s stop calling it “tenure” because in the media the word is trumped up to be more than it is. It’s not like what a professor earns in an university. Let’s rebrand school tenure and call it “Workplace Protection Protocol” (WPP) or something with a catchy acronym 🙂

In sum, good teachers want crappy teachers gone — it makes schools better and raises the morale of the ones who are working incredibly hard for the kids. And where do I fit in? I don’t think I’ve revealed this, but I have tenure — I earned it. But I’m still not clear what tenure really means for me as it doesn’t protect me from being hated by administration.