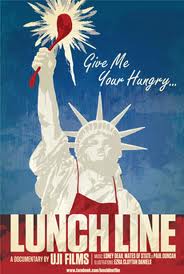 Last month I was able to see the movie “Lunch Line.” The screening was held at the stunning Nettelhorst School in Chicago. Although the event’s organizers invited me to attend by email, I was already planning on being there. I had to see the film. Also the organizers planned an amazing panel discussion afterwards with many people who appeared in the film including both of the filmmakers. The beauty of being anonymous was that I was able to attend and go completely unnoticed. I did not want the event to be about me — it was about this beautiful film.

First, I’d like to say that the movie is terrific. I’m not Roger Ebert, but I’d give it an enthusiastic thumbs up. I like going to movies that entertain and ones that also make me think. Lunch Line did both skillfully. There were two story lines going through the film. The filmmakers, Ernie Park and Michael Graziano, recorded the journey of the Chicago Public School high school kids who participated in the Healthy Schools Campaign’s Cooking Up Change Challenge (2009 was when this particular group participated). I love kids and since changing school lunch is all about them, I really loved hearing their opinions. Hilarious. Inspirational.

When one of the standout kids on the team starts describing her love of the movie Twilight, the filmmakers subtly incorporate the vampire/werewolf theme when discussing the history of school lunch. It sounds a little odd to take that theme and overlay it on the back-and-forth history of school food politics, but it works. All that discussion of the history of school lunch might have been heavy and boring, but with the snappy illustrations and the comedic relief of the teenager’s Edward-worship, it made for some quiet chuckling. I also adored all the 1950-era school lunch footage and governmental films. Classic.

Lunch Line featured interviews with the big names in school lunch reform, many who were in attendance at the screening. The panel after the movie was moderated by Monica Eng, who is the Chicago Tribune reporter who covers the school lunch beat. Members of the panel included Dr. Susan Levine (UIC Professor and author), Rochelle Davis (Healthy Schools Campaign), Greg Christian (Organic Schools Project), Sarah Elizabeth Ippel (Academy for Global Citizenship), Bob Bloomer (Chartwells-Thompson), and other people who I don’t remember (sorry!). The panel was lively (I’m not going to get into it, but you can read this article about it – the article exaggerates what occurred at least from my perspective)

Considering the panel started after we watched the movie, it was getting late when things wrapped up. Most panel participants and audience members left. I wanted to speak to one person on the panel — the person who surprised me the most. Bob Bloomer, the Chartwells guy.

I have a pretty decent bulltrash detector and I could tell that he was a decent guy, both when he was interviewed for the film and while speaking on the panel. So I decided I would approach him…and tell him I was Mrs. Q… Well, look at that, it’s getting late… I’ve get to get up in the morning so I’ll leave the rest of this story for another blog post!

But before I left that night, I purchased two Lunch Line t-shirts, one for me and one for my husband. Here’s a photo of Mr. Q’s trunk modeling this very cool shirt. I’m going to be wearing mine around! You can check out the shirts for sale at the Lunch Line store. 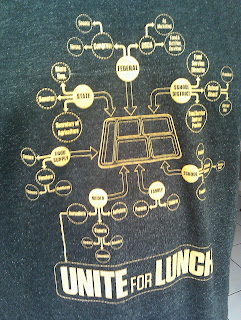 If you would like to schedule a showing of Lunch Line in your community, you can contact the filmmakers (super nice guys) on the website by clicking on “Host a Screening.” Also you can check out upcoming screenings (for example, they are in Boston this weekend and even back in Illinois in late April).

You really must see this movie if you care about school food.