Joon-Yee Chuah is a middle school math and culinary science teacher in Austin, Texas. He infrequently updates his blog, whyhenrycooks.blogspot.com, now that his mother has learned to read things on the Internet.

Hi, everyone! This is the story of how 40 sixth graders opened a restaurant for one five course meal and served 140 people. I know it doesn’t sound plausible, but overall – it was not that bad, and I’ll do it again.
Last year I started teaching a Culinary Science elective, wherein I blogged my lesson plans and eventually posted a guest blog here about the undertaking called “Kitchen Day” (Guest blogger: Culinary Science Class April 2010). Both sections of my elective had the opportunity (twice each) to go to the home economics laboratory (which is, among other things, a big kitchen) and cook a full meal for themselves in no more than an hour and thirty minutes. This year I got the ridiculous idea to one-up myself and shoot for something much bigger. (I’ve been told that this is what we call “progress.”)
Inception (not the movie)
I was having a conversation with my friend Mike, who is a professional chef, about the state of the restaurant workforce in Austin. He’s been cooking for more than 25 years in some of the finer establishments here in town. Mike observed that people catching “foodie fever” often don’t understand the line between the world of hobbyists and that of professionals. The lines have become blurred; some people thrive while others misunderstand the challenges of taking on a career in the culinary world.
Whereas the focus of last year’s Kitchen Day was to give students a taste of what it’s like to cook for themselves, the focus of this year’s activity was to give students a perspective on what it’s like to serve people.
140 people.
The Menu
The challenge of preparing an elegant menu to serve many people with a relatively untrained staff is to create recipes that look flashy, but are deceptively simple and require little expertise.
Ricotta sage dumpling over carrot puree with apple, green onion
Spring greens with Asian vinaigrette, supremed orange, sprouts, green onion
Shitake straciatella with parmesan, green onion
Soy braised chicken or tofu with tamarind glaze, Hainan style rice, sesame cabbage, bonito, cilantro, green onion
Flourless chocolate cake
This is work
Well, yes, the whole thing is a lot of work, but I’m not talking about work on my part. We planned to do this on a Saturday. Students would report for duty at 8AM with a sack lunch and service would start at 11:30AM. Why a sack lunch? If you’re working in a restaurant, you either bring your own lunch or eat a simple meal out of the restaurant’s larder. If it’s something like a fast food setup or a restaurant designed to serve several dozen tables, employees are typically given a discount on food. In a smaller restaurant, employees might eat a “family meal” – something simple the chef prepares to be eaten before service. There are few nice restaurants that serve their employees a complete production meal. In the case of Restaurant Day, I didn’t have the spare labor, equipment or finances to feed my staff.
RSVP
Students were allowed up to four guests. Guests were also asked to RSVP as vegetarian or vegan. Somewhere around 165 people RSVP’d by the deadline, which meant planning a meal for approximately 170 guests. Strangely enough, only 6 people RSVP’d as vegetarian.
This would come back to haunt me.
Spreadsheets are your friend
After going over the menu with the students, their job was to set up a spreadsheet to calculate scaled recipes, per plate costs and waste. Needless to say, it was a fairly complex process. It always begins with a recipe, but leads to some very convoluted math. The problem with standard recipes designed for no more than a dozen servings is that not only do they frequently fail to scale properly (especially in a “times 15” situation), they also don’t take into account interacting with multiple courses. Rather than trying to scale a recipe by diners, it’s much easier to work with serving sizes in ounces. The students and I used an electric scale to perform some basic yield testing. How many ounces of onion goes into a serving of soup? What is the yield percentage of a carrot? How much does a handful of salad weigh?

In the end, we determined that if all 165 diners arrived, our average plate cost would be around $3.71. We set the suggested donation at $5 to offset the cost of hiring a custodian, and any no-shows.
Prep, Service, Clean Up
All are important. Let me repeat that – every single person in a restaurant is important. I divided the students into three labor camps – food prep in the kitchen (12 students), service staff in the front of house (20 students) and bus/drinks/cleanup staff (8 students) to grease the wheels. I spent almost all of my time on the actual day in the kitchen, but did a fair amount of training work with the service staff. They had to know the menu inside and out in order to serve the customers. People have extremely diverse dietary needs and everyone needed to be accommodated. I would say that the from a mental standpoint, the waiters had the toughest job. They were responsible for memorizing every ingredient on the menu, timing service across five courses for up to three tables with six diners each and – possibly the most challenging thing of all – providing customer service to a dozen and a half adults. (Believe it or not, a few of which were unruly.) Each student was given an order card to help with the task of managing the orders.

Dumplingpocalypse
How do you make 200 dumplings in three hours with twelve students? You don’t. You make them a few days in advance during class when you have all of them sitting in one place. Some students are better at folding dumplings than others. Here’s what they look like: 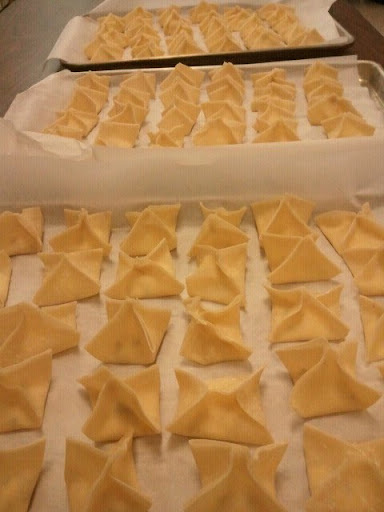 “And that, kids, is the story of how your father killed and braised a 160 pound chicken with 79 left legs and 81 right legs.”
No, I don’t have kids of my own.
The difficulty of individual portions is that when you buy chicken in bulk, there is rarely a precision count of exactly how many legs are in one ten pound bag. They say “40 to 50 count.” In reality, it’s closer to fifty. The night before kitchen day, I got a head start and did the braising. Immediately I ran into a problem. The three ovens that I had to work with could only hold about forty pounds of chicken at a time and the braising process took approximately two hours for each pan to come to a safe temperature of 180 degrees. (180 degrees sounds overcooked but… aha! We’re braising so the chicken always remains tender.)
I called up Mike (who thought I was calling about happy hour at a local bar with pretty girls) and asked him for advice on how to proceed (which was a far less exciting conversation topic than happy hour). He suggested that I get out some stock pots and poach the chicken. The original idea was to preserve some of the fat content in the chicken for this step with a low braising depth, which would not work in a water bath. However, faced with the prospect of spending a second 8 hour day at work, I went ahead and punted. It only took me about 5 hours to braise the 160 pounds of chicken. Also, I listened to a lot of Lady Gaga on my iPod while working alone that night.
And We’re Off!
Most of my “staff” arrived on time. I had the assistance of my wonderful administrator in front of house matters. One of my front of house students, the maitre’d, became the de facto shift captain for the front of house and arranged… well… everything. I was impressed when I saw how smoothly things ran, even though I had no idea what was going on because I was buried up to my ears in chicken. Without this student, everything would have fallen apart.
Kids surprise you.
In the back of the house, I had a team constantly glazing chicken and running it in large pans under a broiler. One team was responsible for baking six flourless chocolate cakes. (I. Don’t. Bake.) Yet another team was responsible for cutting up about sixty pounds of vegetables. They had a lot of work cut out for them. (Ha!) Having only twelve people in the kitchen as opposed to the twenty something from last year’s experience really made a big difference in efficiency. There was one accident wherein a student who was supreming an orange cut themselves, but they were able to quickly follow the safety protocols we went over in class. Notify me, bandage themselves, put on a glove, reassign themselves to other duties and have me clean up the contaminated work area.
I had a few students assigned to the kitchen that showed up late. I had already reassigned their recipes by the time they showed up and they weren’t quite able to figure out how to make themselves useful. Yes, I understand that they’re sixth graders and are in the process of maturing, but this is work. You don’t show up to work late, and when you show up to work – you work. Some of my students literally grew up that day. I was told by many adults that they saw a definite change in their student server from the beginning of service to the end. They stood up straighter, spoke with more clarity and walked with more deliberateness and confidence. Others, well… they did exactly what you would expect sixth graders to do.
Food
I didn’t manage to take a snapshot of a completed version of everything, but here’s some of what I have. 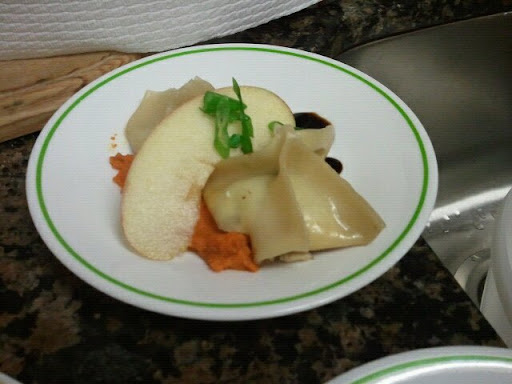 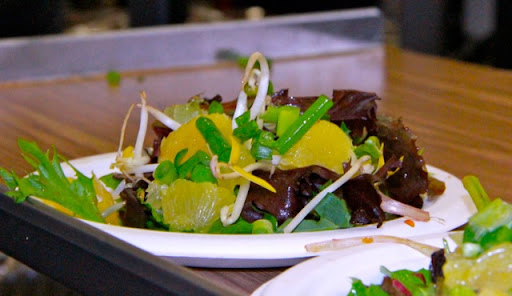 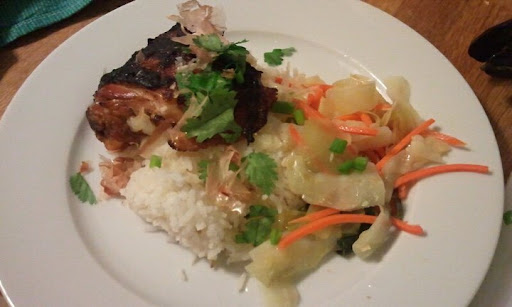 Entree
Post Mortem
What went wrong:
What went right:
The Nutcracker
This took place in December. I know, I’m a slacker and didn’t write it up until just now. (Vacation.)
A number of students had tickets for our local ballet’s performance of the Nutcracker, just after Restaurant Day ended. Most of them fell asleep in the first act.

Here’s what we discussed in class:

Anyway, thank you for reading this far! If you’d like to take a look at my Picasa album, here’s the link. You’ll get to see, among other things, a jillion green onions, 8 gallons of vegetable stock simmering, 18 pounds of supremed oranges and a partridge in a pear tree. (Note: Partridge in pear tree not included in this album.)