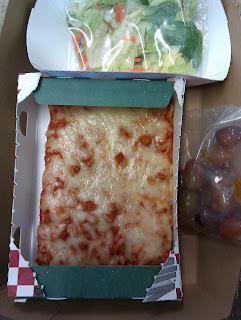 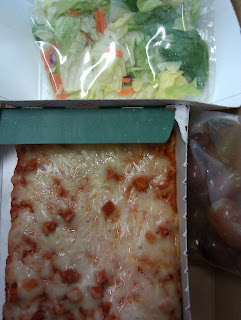 My feelings towards school lunch pizza (which reportedly contains 62 ingredients) can be summed up in three words:

First, I hated it. Then I started liking the flavor. Now, I can’t stand it.

Similar to how I felt about a boy named Mike in eighth grade. Mike was mean to me and then nice to me and then told me another boy liked me. I loved Mike. I hated Mike. I liked both Mike and the other boy. High drama after school while waiting for Bus #222. Lots of chasing.

Now as an adult I finally know: Mike liked the other boy.
I’m in the unfortunate group of “those-with-impaired-gay-dar.” Oh, there has been heartache…

Getting back to the pizza, there has been high drama in 2010. I can’t wait until I end our toxic relationship! 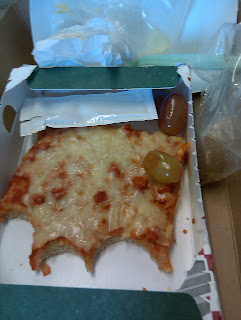 I’m breaking up with you!

The salad was really tasty. I hate to criticize REAL fruit, but some of the grapes were mushy. I know the kids like grapes and it’s REAL fruit, so I hate to complain. A+ for effort!

Also, I’m stopping December 17th because that is the last day of school in 2010. My original goal was to do this in the year 2010. The project is oddly over two school years…just goes to show you this was not professionally planned or premeditated.

Thank you to everyone who called their representatives. I know it’s “only” 6 cents per meal, but it’s still the best thing to happen to school lunch in a few decades according to what I have read. I think there are a lot of people who are disappointed that there wasn’t more money or major changes in regulations or “a big shake up.” Hey, I give it an A+ for effort!! We are headed in the right direction. This bill almost didn’t pass. If it hadn’t been for the “lame duck” session (which is maybe it’s not so “lame”), this would have sat in committee for who knows how long. This is a victory and we need to celebrate it.

I have really appreciated all of your positive comments. I get the occasional negative comment and I rarely delete them because, well, they can be hilarious. This comment came in and I couldn’t stop laughing. Do please enjoy it with me:
Interesting choice considering Sarah Palin recently brought cookies into an elementary school in Pennsylvania to purposely defy all the healthy talk about school food. Thoughts on that?

*eye roll* what a bunch of bs. I cannot wait until you and your project go far away. And stop begging your readers to support this and that. I’m really sick of helping this waste of space we call a future. You’re like the Sarah Palin of blogging: popular with the soccer moms and so self serving. GO AWAY.