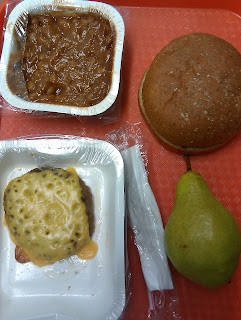 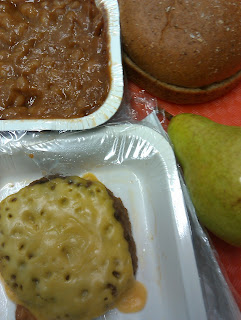 The patty looks odd, right? I’m puzzled as to how the cheese got pock-marked. It almost looks like it was dribbled on there, but I think that it must have been placed on as a slice and then it melted during the (re)heating process…then the condensation dripped down on it? I don’t know. The baked beans were a little on the gelatinous side, but fine and the pear was great (it was a little wet so I knew it had been washed).

I have to say that the patty didn’t taste *bad* but, as usual, I shrug…who knows what I’m eating. From what I’ve read the quality of this beef is either the same as a fast food patty or worse.

I talked about lunch with a couple kids. I asked one girl, “Did you eat the baked beans?”
“No, I don’t like beans.” (I’m willing to bet this is the attitude of most of my students)

And the other girl piped in, “Did you know that beef is from… a cow?”
Smiling, “Yes, I did.”
(She even paused for dramatic effect!) 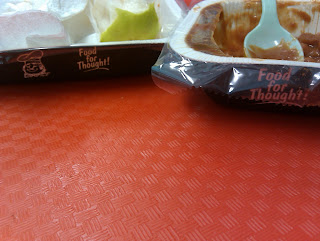 Almost exactly two hours after lunch (yes, I looked at my watch), I burped and tasted processed meat. I want this to be on record: I never want that to happen again. After December 17th, I’m done with processed meat for good. Add it to the list of things I don’t want to eat again…(ahem, gluten, dairy)
***

Take a look at the calendar. Yep, tomorrow is December 1st. Where did the year go? What happened to me?

Looking back, I started this whole thing on a whim, a crazy thought. I was sitting on the couch last December coming up with my goals for the following year (it’s a ritual of mine) and I told my husband, “I should eat school lunch every day next year! The kids eat the weirdest packaged lunches…. I could blog it…” with a laugh.

Then I stopped, “Hmmm.” He laughed too until he realized I was partially serious.

“No, we got enough on our plate.” He was referring mostly to our son, about 15 months old at the time with near constant ear infections, not a good sleeper, our chronic exhaustion….

So I did what every woman would do in that situation, I forgot about it. We went on with our lives and enjoyed the holidays, unfortunately two ER visits with our boy…

I couldn’t shake that thought. It was like December 28th or something and I was driving somewhere, maybe just around our community, running errands. The “school lunch blog” thought entered my head again. My sweet, goofy students. So broke, poor even. But so much to offer the world. Well, damn, “I’m going to attempt to eat school lunch everyday in 2010.”

And here I am. Eleven months later. 150 lunches eaten. I’m oddly sickened but proud…
My relationship to food has changed…forever…there’s no going back.

Then: I didn’t blog opinions. I was scared.
Now: I’m aware and an advocate, stating my thoughts. I’m not…as scared 🙂

Then: My son was ill, an ear infection every two weeks.
During: He got ear tubes, which meant he just got an ear infection once a month, two ER visits this summer, received prescription for daily med and home nebulizer in September.
Now: He is healthy, changed him to goat milk late spring, totally (cow’s milk) dairy-free since September and gluten-free since October. No ear infections, no tantrums, great sleeper. I’m parenting a different child.

Then: So I have chronic IBS, so what? It’s just a cross I have to bear…along with every one of my immediate family members now that I think about it, but I tested negative for Celiac’s Disease so it can’t be gluten…?
During: In June after six months of school lunches, I was diagnosed with mild asthma and got my first prescription for a rescue inhaler.
Now: In October, started the low gluten/low dairy diet outside of school is making life better. Yep, I know. Wow.

Then: I thought it was “just food.”

Now: I have learned that food is personal, food is life, food is health.

Thank you, dear readers, for following along on this wacky journey and putting up with me. If you started from the beginning, you really didn’t know what you were in for, did you? Neither did I. I’m so happy I started this blog and met all you wonderful people. If you ever needed a reminder to listen to that little voice inside you, your gut (literally), here it is!

31 thoughts on “Day 150: cheeseburger and my metamorphosis”