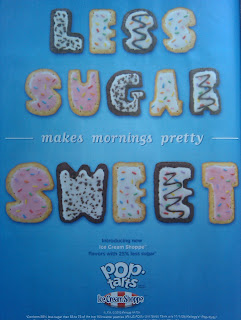 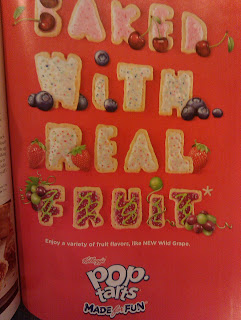 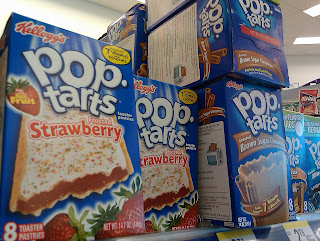 Pop-Tarts on display in Walgreens 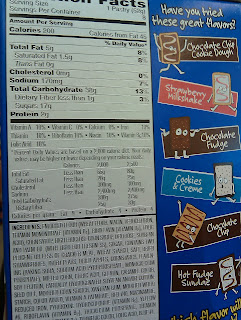 A paragraph of ingredients, 200 calories per ONE “pastry,” 38g of carbs
Does anyone just eat one pop-tart when they open the package?
*** Just a few weeks to go until I’m back in school and eating lunches again. All summer I have been blogging about food, kids, and advertising. Pop-Tarts are available in many school vending machines including one I visited. ***
Did you read about how Pop-Tarts World just opened up in NYC’s Time Square? Here’s is a Yahoo! News video that shows viewers the inside of the store and interviews people. The reporter remains pretty much a big fan of the whole operation (yeah for journalistic integrity) and interviews a man who said he ate 12 pop-tarts while hanging out in Pop-Tarts World!! I’ll do that math on that one: 2,400 calories. A day’s worth of calories for many people. Holy 456 grams of carbohydrates! Can you even imagine the blood sugar spike? On the road to diabetes in one day?
Another reason to watch the video is that they show a worker making “pop-tart sushi.” Basically they grind up pop-tarts and then roll the bits up in fruit roll-ups! I think I died a little bit inside when I read that.
I’m just going to say it: It is irresponsible for a corporation to open up a store like Pop-Tarts World when our country is in a “nutritional free fall” with cancer and obesity reaching epidemic proportions. Better would be free cooking classes using real food for any person that happens to wander past.
***

My mother never allowed pop-tarts when I was a child. There was a junk food ban at my house. My husband grew up in a family that ate donuts and McDonald’s and fluff (…and he was a chunky kid in elementary school). So as an adult he has bought the occasional box of pop tarts. And I admit that I ate a pop tart every now because they were in our cupboards. And the occasional one when I was pregnant and nursing (i.e. I was starving and eating everything in sight). Up through the first half of this year, my husband was still buying a box every month, but I was no longer partaking, mostly because I couldn’t justify the calories and they didn’t fiill me up. It wasn’t until I read this May article from Anna Lappe that I took a stand:

Take the Pop Tart. Among its tasty ingredients? Gelatin, made from by-products of the meat and leather industries; sodium pyrophosphate, commonly used in household detergents; and Tert-Butylhydroquinone (THBQ), a preservative, also found in household varnishes; three artificial colorants, including Red No. 40, banned in many EU countries because of human health concerns; and, palm oil. The second most-traded vegetable oil in the world, palm oil is found in most cookies, crackers, granola bars, and more. The global warming connection? Ninety-eight percent of palm oil is produced in Malaysia and Indonesia on former forests that have been cleared and burned, releasing tons of greenhouse gases. Steer clear of Pop Tarts and their processed food brethren and choose real food.

I confronted my husband and told him that he was not allowed to buy another box of pop-tarts. He whined about it so I dragged him to the computer and made him read that paragraph.

We no longer buy pop-tarts.

I don’t miss pop-tarts, but if I did I found a recipe in the April issue of Bon Appetit magazine that details how to make homemade “pop-tarts:” 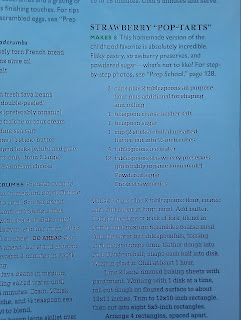 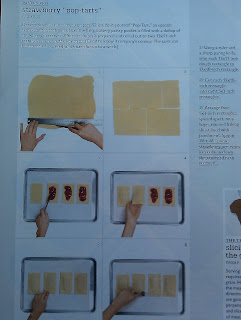 How to make them visually 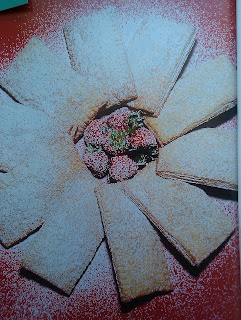 Now THAT is something I want to eat!