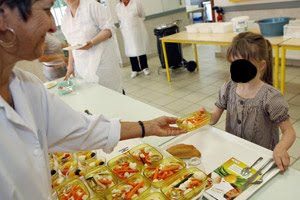 Hi I’m Ann. I’m an English teacher married to a Frenchman but currently sans work permit, which means I have a lot of time on my hands for musing about all things French and American on my blog: http://adventuresintoulouse.blogspot.com/
When my cousin came to visit me in France last year, he commented that the children here act like “little adults.” It’s not an uncommon remark, and it may be because French children are expected to eat like little adults. It is common knowledge that the French take their food VERY seriously; these people don’t mess around and school lunches are no exception. While it’s certainly nothing fancy, the French would describe it as correct, which simply means that it’s well-balanced, affordable and perfectly fine to eat.
French children have the option of eating in the school cafeteria or going home for lunch. For those who decide to eat at the cantine, lunch lasts anywhere from 30 minutes to an hour, usually followed by a comparable amount of recess. 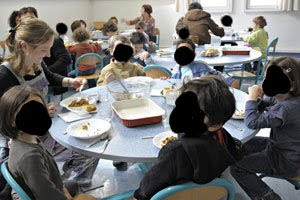 Cafeteria workers and other assistants are there to supervise the meal. They make sure that each child tries what is on his plate and that food does not go to waste unnecessarily. They’re also available to help younger children cut their meat or peel their fruit. For children ages 3-6, meals are served family style at small tables using real plates, glasses and silverware. Self serve cafeteria lines are generally reserved for older children, which allows for speedier service and more autonomy.  Everyone drinks water.
Lunch begins with the entrée, usually some sort of small salad or soup followed by the main dish. Typically you’ll have a protein source with a side of vegetables or carbohydrates. Dessert consists of fruit and yogurt more often than not. Treats such as cake, pastries and other sugary desserts only make their way to the table once a week at the cafeteria, though most French children enjoy some sort of cookie around 4:30 or 5:00 for their afternoon snack.
Since 2008, organic food has been making regular appearances at cafeterias here in Toulouse. 25,000 elementary school students currently enjoy meals that contain one organic item and organic bread is served daily. The idea is that students who eat lunch at school will have consumed the equivalent of one organic meal over the course of the week. Not bad!
Families pay for their children’s lunches depending on their earnings and the number of children they’re supporting. For those earning less than €914 per month (after taxes), lunch is free. For families earning more than €4500 per month, lunch costs €3.45. For those whose earnings fall somewhere in between, they can expect to pay between €1.65 and €3.30. If you’re a teacher who would like to eat the school lunch, it costs €3.80. For prices to fall into these ranges, the meals are partially subsidized by the government.
The government is also very aware that American tastes are catching on over here –fast food, snacking, and soda are very popular. In an effort to curb these bad habits, vending machines have been banned from schools since 2005. An extensive ad campaign has also been in effect for several years now. Advertisements run on TV and radio reminding everyone to: eat five fruits and vegetables every day, to exercise regularly, to avoid snacking in between meals and to consume three dairy products. It gets in your head after a while. It’s surprisingly hard to ignore.
On television recently, I ran across a program that profiled middle school students and what they most liked to see on the cafeteria menu: pizza, quiche Lorraine and French fries were their favorites. No surprise there! But since these aren’t the healthiest choices, it is probably best that the kids are not the ones deciding. This is something I came across fairly frequently while perusing parenting blogs in French: even if your child complains about eating at the cafeteria, it’s important for him to get in the habit of eating what is being served. Food for thought…
And maybe that’s the biggest difference: there’s no pandering to children’s tastes around here. The expectation is that parents, and in this case schools, feed their children things that they too would eat. Both the preparation and the presentation send a clear message: we care about you; we want you to eat well, take your time and use good manners. Bon appétit!
I’ve included a sample menu below, does this look like something you’d want to eat?
A Sample Menu
Monday
Potato and leek soup
Salmon cubes in lemon butter
Vegetable galette
Plain organic yogurt
Apple
Tuesday
Green Salad
Roasted organic chicken
French fries and ketchup
Gouda
Mixed fruit salad
Wednesday
Pumpkin soup
Croque Monsieur (a grilled ham and cheese sandwich)
Mixed baby greens
Plain organic yogurt
Marble cake
Thursday
Beet salad
Turkey skewers
Organic lentils
Camembert cheese
Kiwi
Friday
Mixed baby greens
Veal stew
Organic pasta with butter
Cantal cheese
Clementine
*menu and pictures adapted from: http://www.toulouse.fr/web/guest/education/restauration-scolaire
**Thanks so much to our guest blogger from France! She shared the photos with me and I blocked out the kids’ faces due to privacy concerns.**