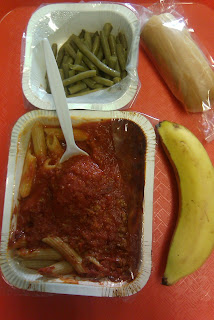 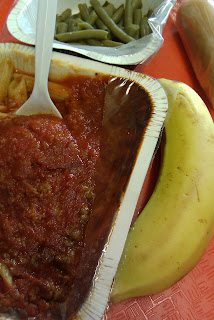 Delicious! I love pasta and the sauce has a uniquely appealing taste. Mr. Q asked me how it compares to a basic frozen pasta from a microwave meal. I think it’s better than a frozen meal, but Mr. Q finds that hard to believe. I wouldn’t change a thing about the school’s pasta at all. I even got a little giddy when I saw it was being served. And I used the breadstick to mop up the leftover pasta side.

The green beans were soggy and fell apart on the spork. I like a crisp green bean steamed for just a short while. I love a little crunch. Banana(!)

In a few minutes I’m going to be live-tweeting Jamie Oliver’s Food Revolution (last show of the season — don’t know when it’s returning). I don’t tweet spoilers in case you are watching it delayed. I really like watching the show (no surprise there). Live tweeting is fun because I can interact with people watching it at the same time. Join me on twitter if you are interested.