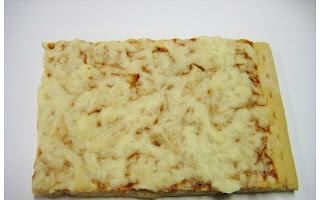 ***Meet Ms. A, our resident (anonymous) food service director contributor. She will be offering a semi-regular pieces about her struggles to better the food environment for youngsters. Before working in school food service, she worked in restaurant kitchens for several years as a cook, pastry chef and sous chef.  She began working for her school, a large private school a couple years ago.  She’s trying to improve the quality and nutrition while reducing the environmental impact of the 500+ lunches served each day. She can be reached at bravenewlunch@gmail.com and her new blog Brave New Lunch.***

I want to change school pizza, and I might be able to.  I began working for my school in 2008 and was charged with improving lunch.  Prior to this, I worked in upscale restaurants in New York City where I cooked most things from scratch.

My first Friday at school, I ate school pizza for the first time in many years and wondered, how is this soggy mess even related to pizza?

A look at the ingredient list is frightening: the crust has about twenty-five ingredients, sauce fourteen ingredients, cheese four ingredients, and cheese substitute nineteen.   That’s a staggering sixty-two ingredients and a lot of reasons to take it off the menu.

I knew we should really get rid of this stuff.  Well, how could I take it off the menu three out of four Fridays, and what would I replace it with? It is a year and a half later, and pizza is still on the menu every Friday.  Why?

Kids like pizza.  It almost doesn’t matter how it looks, smells or tastes.  They still like it more than many other school meals.  Just mention the word pizza. It has the ability to elicit smiles from kids.

The kitchen likes pizza too.  It’s a simple meal to prepare, perfect for Fridays when everyone is tired and ready for the weekend.   Pizza comes ninety-six to a case, frozen and ready to plop onto a paper-lined sheet pan.  Since the pizzas are rectangular, they fit perfectly onto the pan and maximize the entire surface area.  Here’s a nice tip: if you place the slices to avoid the sides of pan, the cheese doesn’t burn onto the pan.  It was learned after doing this every week.  All this means it’s less work and clean up is a breeze.

The health/safety director:  Pizza’s an easy meal.  It is a familiar, safe choice, even for preschoolers, who sometime burst into tears when they are faced with unfamiliar food.  Kids can also eat it with their hands, so they don’t need silverware – one less thing to worry about.  With all the food allergies out there, it is nice to have a consistent meal one day a week.  Those who are lactose intolerant or have a wheat allergy already have alternatives set up for them.

Last year, I came up with new menu ideas such as cream of chicken made with evaporated milk and lots of bright veggies, like carrots, broccoli, and peas and a chicken stir-fry with bean sprouts, peppers, and brown rice.  I did try these out, with some success, but never on a Friday.  How do you replace a meal that is so universally loved or at least tolerated by people of all ages?  I didn’t brooch the subject because it seemed so absurd.

I did, however, dream of replacing the frozen stuff with better quality ingredients.  I found a local bakery that makes focaccia by the sheet pans. The ingredient list reads unbleached unbromated wheat flour, filtered water, sea salt, yeast, and olive oil.  Note: no dough softeners, conditioners, or preservatives.   Nothing I wouldn’t want to eat.  My plan was to make our pizzas in-house using foccacia as a base.  I would cut up the foccacia, ladle marinara sauce from a can, and top it with a part-skim mozzarella.  I made a test batch and sent it out during the last of our lunches.  It tasted great, but there are down sides:  It is a lot more work.  It is a lot messier.  It is also a change to a Friday institution that has been around for years before I came along.

I put changing pizza on the back burner as I worked on a few easier changes.  However, now that I have a growing number of collaborators– a few teachers, parents, administration staff – who have been supportive of changes, might it be time to try it again?

NOTE: all guest bloggers have contacted me of their own free will, have given consent, do not know me personally, and are not receiving compensation.