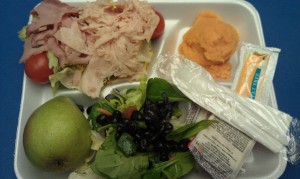 Chef salad (deli meat, cherry tomatoes, cheese, lettuce) was the main entree with the mashed sweet potatoes as the veggie and the pear as the fruit. Then I went through the salad bar for some yummy spinach salad with black beans. Now that I’m gluten free I skipped the saltines, but I’m assuming they were the grain. Yep, a school lunch consisting of two salads. The vendor is obviously different than the one at my former school(s) in Chicago. My current school offers three options every day and each one includes a salad bar run. Can I just say that this lunch was delicious?? It was terrific.

You might think that I must be employed in an affluent district. Not so. Instead of urban poverty, I encounter rural poverty. It’s similar, but different. There’s no glamour factor with poor people way out past the corn fields. You’re thinking hicks, right? But remember that I’m fluent in Spanish so where I get hired there are often lots of Spanish-speakers. My caseload is diverse. People are poor. They don’t deserve pity or ridicule.

That morning I ate school lunch I was running late. I was tired. Grabbing my purse and a travel mug of tea, I packed a lunch I wasn’t crazy about.

So I bought school lunch. One more time.

I snapped some photos of the lunch. I couldn’t resist.

But I’m in a different place now. Both geographically and mentally. I’m not ready to eat school lunch every day.

My phone went on the fritz after I took those shots. I think it’s a sign.

In fifth grade I wanted to be a journalist, work alongside Dan Rather, and be his spouse. I guess I was watching too much General Hospital with my mom because somehow I believed that marrying a coworker was a good career move. I loved writing and telling the news. A little Dan Rather on the side was a bonus.

Yeah, I was a quirky kid.

Our country needs a lot more citizen journalists and writers. Mainstream media is failing us. Where’s Dan Rather when you need him?

The past 12 months I’ve been focused on my pregnancy and my son’s infancy. I’m recalibrating myself after a significant life event. What comes next? I’m figuring it out. I just can’t sit on my hands. They’ve been missing the keyboard too much.