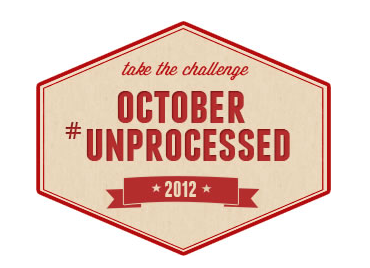 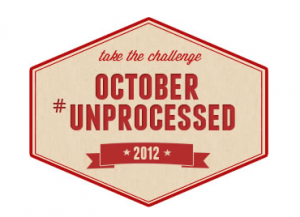 My friend Andrew Wilder from Eating Rules is doing something really cool. He and about 3,000 people have pledged not to eat processed food for the month of October. Hence the name: “October Unprocessed.”

To be successful in avoiding processed food, it’s necessary to define what that really means. Andrew uses what he calls a “kitchen test.” My understanding is that if you can make it in your home kitchen, then it is not a processed food.

I took the pledge, but I decided I needed to define “processed food” on my own terms. I like how Andrew defines the term “processing” implies some kind of factory, while unprocessed is straight from your kitchen. But to me there’s more to the story.

Recently I stupidly forgot a snack before a long drive. I stopped for something to eat and after looking at the offerings in a convenience store, I went with the “Lays Classic” potato chips. There are only three ingredients: Potatoes, oil (of some kind), and salt. I told Andrew how I ate potato chips (he probably shivered), but he said that strictly speaking those store-bought chips met the kitchen test. That didn’t sit well with me.

While yes I can thinly slice potato chips, fry them in oil, and then douse the “chips” in salt, I don’t think that the chips I bought are “unprocessed.” The product from my home kitchen would be far better for me than chips from a store. Normally I chose organic/farmer’s market potatoes and a higher quality oil so my home chips would not be genetically modified (corn oil used for the chips is most likely genetically modified). They wouldn’t look like chips from a bag — they would be pretty unique since I would hand chop them — and the texture would be different.

So there is no part of me that could eat store-bought chips and still plan on eating unprocessed in the month of October. But it got me thinking about processed food. Processed food in my world meets one or more of the following criteria:

Examples include corn syrup, natural flavors (when you look into it, you find out that they are all created in a lab and are hardly “natural”), artificial dyes (Yellow #5, Red #40, Blue #1 are all petroleum-based dyes), additives, and preservatives. Further examples, that may be more controversial, include chicken nuggets (can be made at home, but are nothing like store-bought), canned soup, many boxed cookies, many microwave meals, most cereals… Hmm, stuff in my cupboards…

When I pushed Andrew to tell me what he thinks are true processed foods, Andrew told me that he would never “tell anyone what to eat.” He’s so diplomatic. But he does define #unprocessed (so check it out).

How do you define “processed food?” Could you go a month without it?

17 thoughts on “What does “processed food” mean to you?”