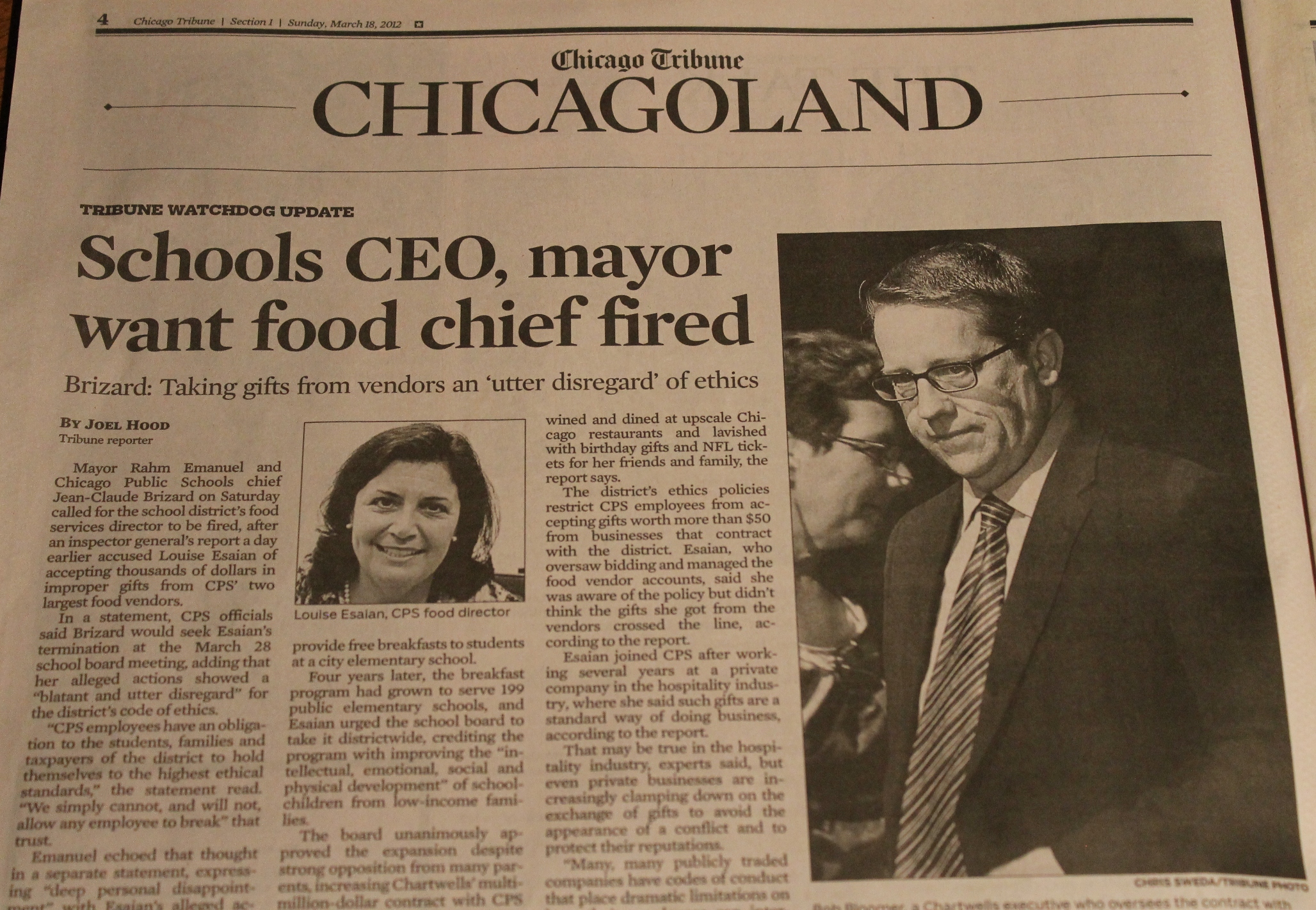 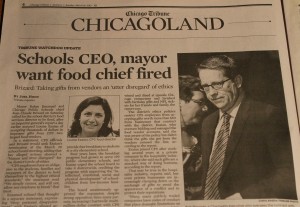 Imagine my surprise when I opened the Sunday paper…

The investigation was triggered by an anonymous email sent to the Tribune last year. The email detailed allegations against Chartwells-Thompson Hospitality, which signed a new $53.2 million food services contract with CPS in May. In the course of reporting the story, the Tribune contacted CPS Inspector General James Sullivan, who launched an independent investigation.

Wow, I guess an anonymous person triggered this investigation. Even though I used to be anonymous, you can be sure that it wasn’t me! The article continues,

According to the email, Chartwells gave the CPS employee skybox tickets to Green Bay Packers home games in 2009. The games included Brett Favre’s anticipated return to Lambeau Field as quarterback of the Minnesota Vikings. Demand for that game pushed ticket prices for the best seats to between $3,000 and $5,000 on websites like StubHub. One Midwest broker said a skybox ticket could have been worth $10,000 to $15,000. The alleged gifts also included chartered buses to Lambeau Field for additional Packers games in 2008 and 2009 and dinners at upscale restaurants.

According to Chicago Board of Ethics code, city employees can’t accept gifts worth more than $50 from businesses that contract with the city, particularly in cases in which the employee’s decisions can influence the bidding process.

The head of the Chicago Public Schools today recommended the schools’ chief of the food service be fired after she and two members of her staff were accused of taking more than $86,000 in gifts from schools contractors.

Frankly, I’m shocked. I have met Ms. Esaian, at meeting in December to discussing CPS’s healthy initiatives as they relate to school lunch, and I’ve met Mr. Bloomer multiple times, at events we have both attended. Both of them are friendly, regular people. Where did their common sense go? When negotiating bids for several million dollar contracts for food service at the third largest school district in the country, it seems obvious that no one should accept gifts from the very people up for the contract. I can only assume that Ms. Esaian thought either that getting free stuff is no big deal or that no one would ever know that she received special perks and gifts.

Nor should this all be on her. What about the company? I believe that it is not prudent to offer up these gifts because it cheapens the deal. Honestly, the only word to describe those negotiations now is “shady.”

The article in the paper goes on to state,  “Esaian joined CPS after working several years at a private company in the hospitality industry, where she said such gifts are a standard way of doing business, according to the report.”

As I wrote in my book, I was an employee of Kraft Foods for four years where I worked directly with Kraft’s customers (retailers and wholesalers). But my job was not in sales. I never had to convince anyone to buy Kraft’s products; I just had to make sure that when the products were bought, Kraft invoiced them correctly and that shipping occurred in a timely manner. I know that salespeople would offer incentives to the customer, but I was never involved in those dealings. Ms. Esaian is right that in the business world that practice is incredibly common.

What’s more common and acceptable is going out to business lunches. As a Kraft employee, I was sometimes included when sales would take the customer out to lunch. It’s my understanding that many business deals happened over lunch. Actually, that’s part of why I think it’s good for kids to learn the value of having lunch with other people: Most of the time it’s not about the food, but instead about making meaningful connections. Or not…I remember one business lunch where the waitress tripped and dumped a whole tray of drinks on my coworker, soaking her to the skin. Needless to say, that lunch was cut short so our boss could take my friend to a nearby department store to buy all new clothes.

But working in school food is different than corporate business-to-business transactions. The multi-million dollar contracts that Chicago Public Schools makes with food service management companies are contracts that they depend on for survival. I mean, $52 million dollars is no chump change. While I think it’s totally within rights to go out to lunch with food service companies since a meal for one can be kept under $50, no one should be under the illusion that the companies are doing that “for fun” or just “to be nice.” Regardless the sum, there is an implied quid pro quo. It ain’t no free lunch.

4 thoughts on “There’s no such thing as free lunch: CPS nutrition director’s ethics under investigation”