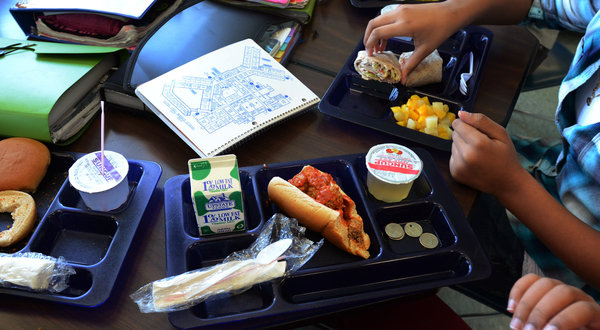 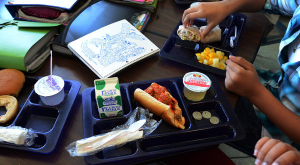 Over the weekend this article appeared in the New York Times: How the Food Industry Eats Your Kid’s Lunch. Usually people in school food reform have a heads up when something big is coming. That article was huge and it came as a surprise.

Lucy Komisar, the journalist who wrote the article, reports that when school districts hire companies to come in to manage all aspects of food service in school cafeterias that there are no cost savings. She cites research from the University of Michigan, which showed that labor costs decrease, but fees increase. I mean, doesn’t that make sense? Bring in a for-profit company and they have to find a way to make some money.

But that same study goes on to say that when private food service corporation manages a kitchen, test scores fall. The researcher from the U of M said that, “his study provides evidence that dietary differences might be the underlying cause for the negative association between private food-service management and lower student performance.”

“The Agriculture Department pays about $1 billion a year for commodities like fresh apples and sweet potatoes, chickens and turkeys. Schools get the food free; some cook it on site, but more and more pay processors to turn these healthy ingredients into fried chicken nuggets, fruit pastries, pizza and the like. Some $445 million worth of commodities are sent for processing each year, a nearly 50 percent increase since 2006.

The Agriculture Department doesn’t track spending to process the food, but school authorities do. The Michigan Department of Education, for example, gets free raw chicken worth $11.40 a case and sends it for processing into nuggets at $33.45 a case. The schools in San Bernardino, Calif., spend $14.75 to make French fries out of $5.95 worth of potatoes.”

I had been wondering why processing a whole food was “cheaper” than serving it as nature intended. Processing does indeed add hidden costs (financial costs up front and health costs later).

Then there are the rebates that the school food companies get for buying food products from other companies. Yes, it’s a tangled web. Ed Bruske, The Slow Cook, has done some terrific reporting on rebates in the past: Finally Revealed: Processed Food Rebates Dominate School Cafeterias. The NYT article touches on rebates as well stating that they are worth about 14% of contracts.

You know, I used to work for Kraft Foods. I don’t talk about it very often, but it’s in the book. That was in my previous life before I went back to school, got my masters in speech pathology from Northwestern University, and started working for Chicago Public Schools (CPS). It’s not often you see a resume like mine –four years work experience at a Fortune 500 food company and more than five years clocked in at the third largest school district in the country.

One small part of my insanely stressful job at Kraft was to collaborate with sales to make sure that customers received appropriate deals off-invoice. They weren’t called rebates, and maybe they are truly different. What were they? Discounts for buying a large amount of product, buying something that was “on special,” or sourcing product from certain warehouses. My understanding is that is standard practice industry-wide and it doesn’t cause me to raise an eyebrow.

What should be troubling though is that the cost savings aren’t passed on to school districts. Hey, school districts are hurting and extra governmental cash intended for school children goes into the pockets of share holders or higher-ups in the corporation. As much as I like Bob Bloomer (the Chartwells/CPS food guru), I think that school food needs to be in the hands of non-profit entities, if at all possible. If that means seeking out new options like Kate Adamick’s Cook for America (read more about Kate Adamick), bringing in a chef like Boulder did with Chef Ann Cooper (check out The Lunch Box for more information), seeking out districts that are doing it right (see: School Meals That Rock). The time for change is now.