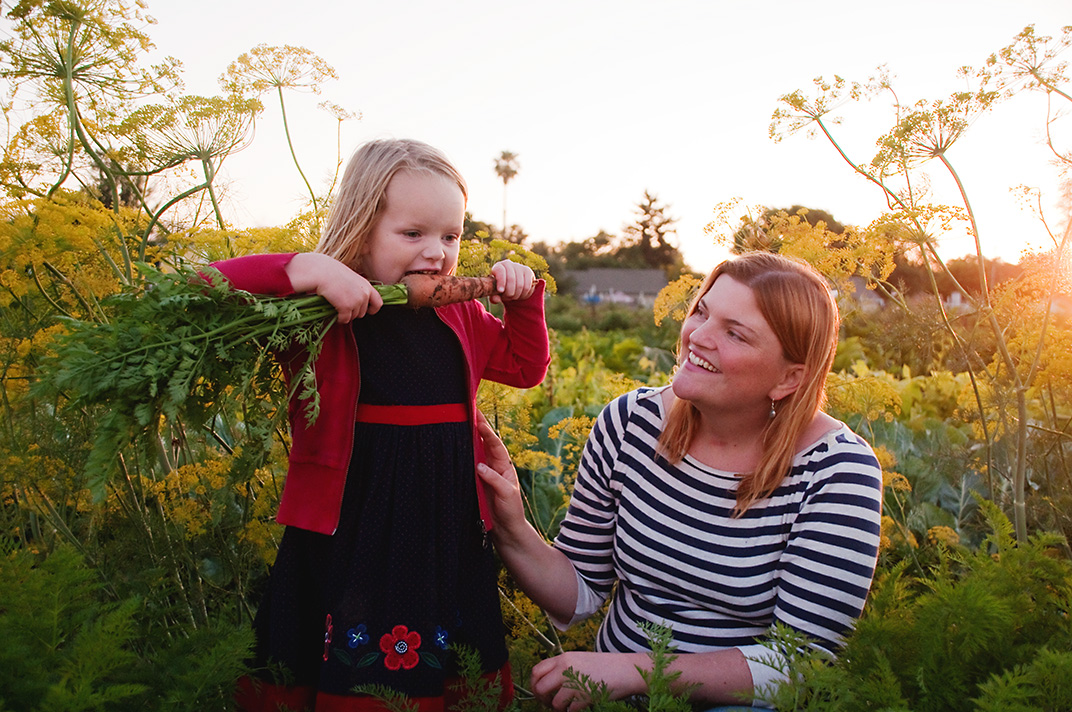 Liz Snyder is a food activist, farm-starter, and Mom. She has a Masters’ in nutritional anthropology from Oxford University. In 2007, she co-founded Full Circle Farm in Sunnyvale, CA and more recently, helped start a CSA program for 150 low-income families with FIRST 5 Santa Clara County.

Right now, Liz is working on starting Little Bee Pops, a small sustainable food business in Mountain View, CA. Using fresh produce and honey – all sourced from within 150 miles – the handmade, healthy popsicles will be sold at local parks and farmers’ markets.

She is currently crowdfunding her new venture via Kickstarter. You can learn more about Little Bee Pops by clicking here: http://www.littlebeepops.com

It can be painful sometimes, being that “mean mom.” The one saying “no” to the snack foods aisle of the grocery store, the ice cream cart at the park, or the snack bar at the pool.

If you’re a parent reading this blog, you can probably relate. Because unfortunately, the way we feed our kids at school is just the tip of the iceberg. It seems to me that, in every corner of the world inhabited by kids, there is a company or institution pedaling junk food laden with corn- and soy-based chemical byproducts. I don’t blame my daughter for wanting it all – her brain is wired to seek extra sugar, fat, and calories. But by consistently and vehemently saying no, I am always worried that I am turning junk food into forbidden fruit, something to be coveted and snuck and eaten in secrecy. As a nutritional anthropologist who’s studied the deep connections between food choices and emotions, I realize this is the exact opposite of what I want for my child.

Back in 2007, I set out on a mission to change one school district’s food supply – and to change a neighborhood’s relationship with food. Together with a small group of committed community activists, I co-founded Full Circle Farm, an 11-acre organic, educational farm on school district land. The idea was to grow fruits and vegetables to supply both the neighborhood and the school cafeterias with fresh, organic, affordable produce.

At the time, my daughter was only a preschooler – but that farm became her playground, her school, and her grocery store. It was not unusual to find her traipsing through the fields gnawing on a tomato the size of her head, or in the educational garden, grazing row after row of tender DeCiccio broccoli shoots. Her natural instinct to seek food, to graze, and to go after the sweetest stuff she could find was completely healthy in this context. I never said no to sun-ripened strawberries, tender pea shoots, or purple string beans she liked to snag straight from the plant.

When I left the farm in 2010, it was a tough transition for our whole family. But I think Helen especially struggled with the lack of space in her new school, the lack of natural features in our urban neighborhood, and the lack of access to food not served or prepared by anyone but Mother Nature. That’s when the begging and whining for sweet snacks really began.

It took me a good long while to put two and two together, but I realized that kids have a profound need for gathering and eating food of their own choosing. And in the context of hunter-gatherer or agricultural societies, this instinct meant survivial. Today, it means Type II diabetes and a lifetime of struggle with junk food.

I am not a fan of the so-called “war on obesity”. I think it blames kids for being kids, and targets some kids over others – when in reality, the thin child on a junk food diet won’t be a healthy adult, any more than a chubby kid who eats the same way. Instead, we need a “war” on our kids’ food environment and the corporations that perpetuate the tidal wave of junk food marketed to kids. We need healthy treats in every park, working farms in every school, and spaces for kids to be in the sunshine and dirt, moving their bodies without shame or prodding.

It’s not our kids’ desire for food that is the problem. It is the quality and content of the food available that is the problem. My latest endeavor is to change that food environment, at least in my little corner of the world. My daughter and I, together with my best friend Lilia, are starting Little Bee Pops. We’re going to make popsicles out of nothing but farm-fresh produce and local honey, and sell them at our local parks and farmers’ markets. It’s not going to change the world, but it’s going to provide an alternative to the corn syrup-laden treats that my daughter begs me for. For all us “mean moms”, it’s an opportunity to say YES and celebrate the joys of healthy food, simply prepared. And we are hoping to go beyond that – to become a kitchen incubator for other small, sustainable food businesses here in Silicon Valley.

When neighborhood farms are the norm, small healthy food companies abound, and school gardens are commonplace, food can become something to celebrate instead of fear. Because in a healthy food environment, there’s no reason to restrict or bargain or bribe. Food can and should be a joyful, normal part of childhood. I hope I see the day where us parents will be able to relax, sit back, and enjoy the broccoli.

14 thoughts on “Guest blog: In defense of the childhood treat”