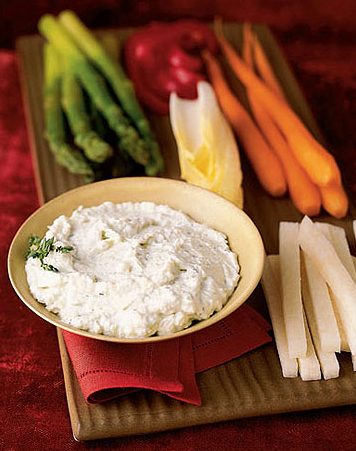 Mark Lock is a research associate at Harvard Business School, blogger, foodie and avid social media experimenter. He works with Jason Riis and is involved with research on marketing interventions to increase consumption of healthy food. His blog on food psychology is at: http://thinkingandeating.wordpress.com

I once overheard a friend say, “What is the deal with all these school lunch advocates? I had bad school lunches when I was a kid and I dealt with it. All that matters is that now I am eating healthy.”

He said this while he was forking some salad into his mouth … but downing America’s favorite beverage—Coca-Cola. 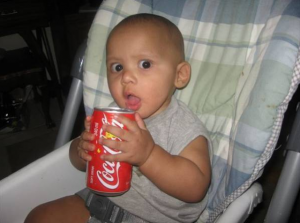 Actually, it matters more than ever that children should be eating healthily. Habits and palates are formed when young and surprisingly impact diet choices significantly later in life.

School lunch is where children have a chance of developing healthy eating habits when older. Try to imagine any other eating establishment that has a captive serving audience of 5 meals a week over 40 weeks which equals 200 meals a year for thirteen years (K-12). There are probably few to none that wield this amount of power. 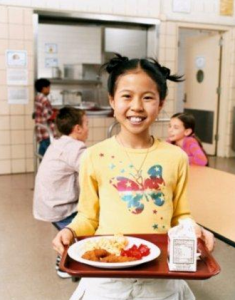 Let’s evaluate the statement, “All that matters is that now I am eating healthy.” Such a statement is misleading because in psychological research we see time and time again that people are hindered by behavioral inertia to adopt new behaviors (even if they know those new behaviors are much better than their old ones). If children start eating unhealthily they need to overcome much more behavioral inertia to switch over to healthier ways of eating when older.

Status quo and default options are large forces in determining what gets eaten later in life. If children eat French fries and unrecognizable mystery meat day in and day out, this becomes ingrained in their perceptions of what is normal. Familiarity then leads to increased preference for these foods due to mere exposure, as has been evidenced in classic psychological studies. The psychological framework below illustrates how these forces strengthen and propel people into a never ending loop of potato chips and Coke. 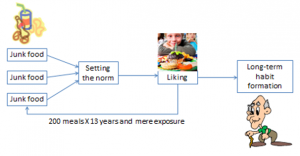 The biological explanation further supports the point that school lunches can ruin or create a lifetime of healthful eating.  I had the pleasure of studying under Bart Hoebel, renowned Princeton neuropsychologist who built his research empire on obesity. His work investigated the effects of the two most prevalent ingredients in processed food including school lunches: High Fructose Corn Syrup and Fat.

He found that High Fructose Corn Syrup enables weight gain much faster than less processed versions of sugar such as sucrose. What is even more surprising is that High Fructose Corn Syrup (HFCS) intake triggers addictive behavior. Rats who received HFCS for a while and then stopped being fed HFCS exhibited signs (teeth chattering, eating more sugar after the sugar-fast period was over) similar to symptoms of nicotine and alcohol withdrawal. 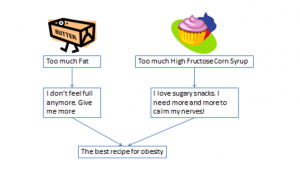 Fat, while hasn’t been proven to be addictive, can mess around with people’s perceptions of food satiety. In 2001, Jiali Wang and colleagues showed that rats who were fed high-fat high-energy diets were desensitized towards eating fat (in human terms, this means it takes more and more fat to feel satiated if you regularly eat fatty foods).  If we are feeding kids high-fat diets, how easy will it be for them to change to healthier diets later on in life without feeling starved? It is pretty darn hard considering that an adult brain becomes less plastic and malleable with age.

What can schools and parents do?! Tips from the marketing department

Schools and parents should fight for school reforms and changes in home cooking with an understanding of how food is perceived by these kids for maximum effectiveness.

Why do kids hate vegetables and fruits, the most nutrient dense foods per calorie? They are definitely not filling on their own and definitely not addictive. How are fruits and vegetables going to compete with greasy pizza and strawberry milk then? 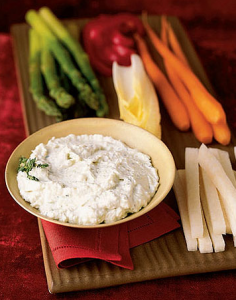 A natural grilled beef patty is actually harder to process for kids than your average boiled cabbage, but is only much more palatable when it’s drenched in a sweet sauce or has been wrapped with chunks of fatty meat in a sausage casing.

Why aren’t we taking this approach to vegetables as well (but keeping our common sense about nutrition)? Spice up the flavor of vegetables by adding flavor! It is a bizarre phenomenon how school lunches are plagued with rock hard carrot bits and sharp tasting celery sticks. A  December 2011 publication from the Journal of the American Dietetic Association found that kids increased their consumption of vegetables by 80 percent when they were offered dips with them. Low-fat yogurts and regular yogurts both were equally effective! This means children’s neural pathways are not craving unhealthy food, they are merely craving flavor. Hummus and apple sauce are also good dips to use. 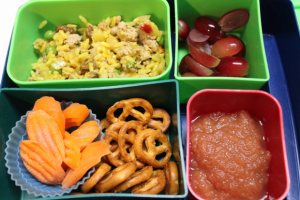 Mrs. Q posted a picture of her “party rice” some time ago where she included a variety of vegetables chopped up and dispersed within a large bed of rice. It was a huge hit for her son. What Mrs. Q did was successfully “market” her vegetables (or in other words, hiding them). In July 2011, Maureen Spill and colleagues published a paper showing that vegetables that were pureed and incorporated into other food prompted children to eat more vegetables. Kids ate 73% more vegetables calorie-wise when pureed than in their un-pureed forms and reduced their overall calorie intake by 12%! Because schools are forced to think about their lunches from a food pyramid standpoint, it is hard not to compartmentalize foods when planning menus.  But the extra step of mixing fruits or vegetables into starch or protein dishes may prove to be an effective tactic. Hide those vegetables and before you know it, kids will be eating more of them without even knowing.

17 thoughts on “Guest post: The Psychology of Children’s Eating: How to Leverage it for Good”