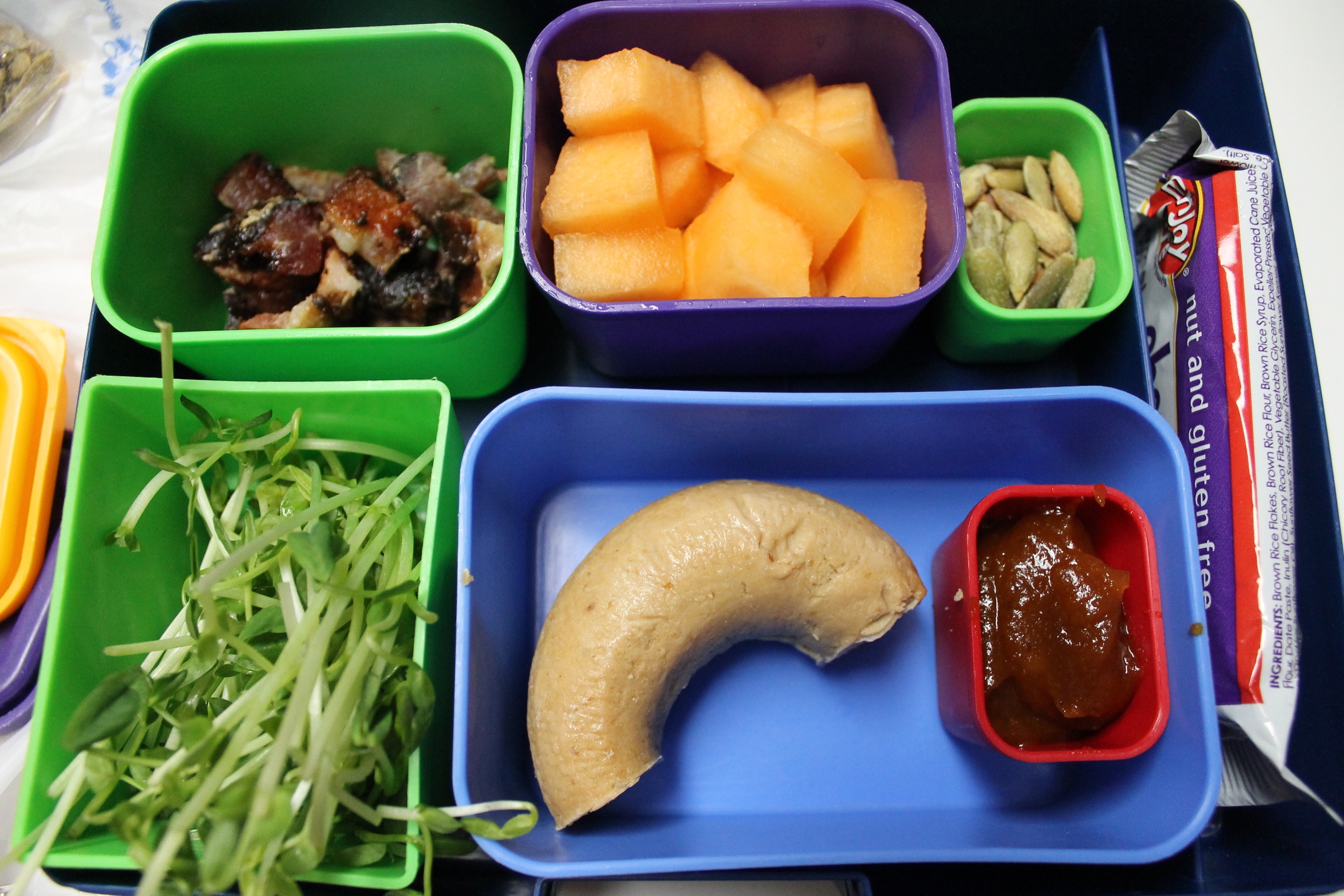 My son has been at his new school now for three months. I’m really happy with it. There are opportunities for enrichment including extra classes like sports, swimming (off-site), and dance. I signed him up for sports and dance (and paid extra for both), which are held during the day. He loves playing sports so choosing that class was an easy decision. I also chose the dance class because I did ballet as a child and just loved the running and jumping. I told my husband about my wanting Charlie to do dance and he said, “Great. It will help his balance.” Admittedly I enjoyed buying Charlie little black ballet shoes (living vicariously much?). I asked him who is in the dance class and he listed only girls’ names. I think he’s the only boy, though thankfully he is still too young to think of these things. I’ll take advantage of that as long as I can!

Another factor in choosing the school was the diversity. At my son’s previous school Charlie was the diversity (being that he is half-white and half-Chinese). All the reading I have done about raising mixed race kids is that they need to be surrounded by diversity so that they don’t think of themselves as different. I would say that at least 50% of the school is non-white and there are a few mixed race kids, too. When I pick my son up, I hear many parents speaking different languages spoken including Korean, Hindi, and Polish (or Russian — I can’t be sure). My son talks about his friends and it has taken me some time to learn their names because many are unusual. My son has even corrected my pronunciation! I also believe that there is economic diversity among the students, which is good, too.

His previous school wasn’t a terrible place at all, but the new school fits him better. It feels more like a school and I think it’s a great space for him. This summer I was really nervous about turning his world upside down, but I’m thrilled that we did it. Even though there was an adjustment period, I believe Charlie is happier and learning more. Goes to show you should take calculated risks. 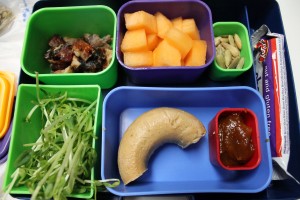 I asked my son if he ate his lunch and he said very excitedly, “I told [child’s name] I eat GRASS!! I ate my grass all!” I doubled over with laughter. Of course he saw the pea shoots (from Trader Joe’s) as grass!! That’s going down in history. Child care menu: Meatballs in tomato gravy, steamed rice, veggie blend, apple. 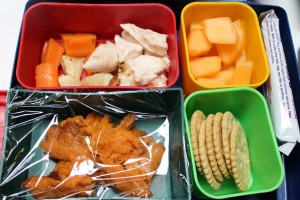 I have experienced the wonder of roasting a whole chicken. Now we will be buying a whole chicken every week and roasting it. It’s simple, cheap, and fast — with  plenty of leftovers. My son really likes cantaloupe, too. Child care menu: Turkey taco, cheese, lettuce, fruit, tortilla 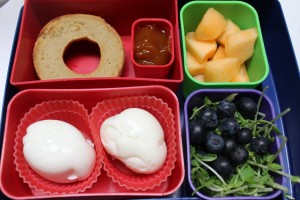 That morning I asked my son if he wanted “grass” in his lunch again and he said, “No.” My husband was right there and said, “No, you are getting pea shoots.” Sometimes I will ask and opt out of something if I’m worried that he won’t eat it. Specifically with the “grass” I didn’t want him to feel like he had to eat it. Anyway, we went with the pea shoots and after school he said he ate it. He’s at the stage where he is incapable of lying. And I know there are a lot of bagels with pumpkin butter. It’s a fave of mine. Child care menu: Chicken tenders, salad with ranch dressing, cinnamon apple slices 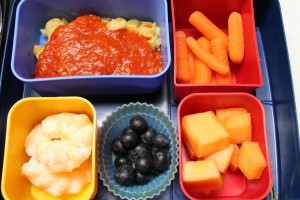 I bought shrimp at Whole Foods and I asked the man behind the counter how I should prepare it. He said that I could sautee it. So I went home and Googled sauteeing shrimp. I ended up throwing a bunch of garlic in there and lemon juice. Really great — my son was a big fan. Child care menu: Turkey hot dog, steamed rice, carrots with dill dip, banana, wheat roll. 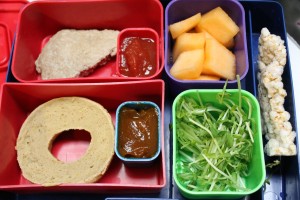 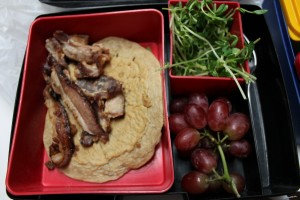 It looks UGLY but it was sooo good. 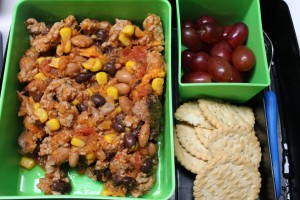 The secret ingredient in the chili? Leftover oven-roasted sweet potato. One can pinto beans, one can black beans, 1 pound ground turkey (browned), a little chicken broth, a can tomatoes, remnants of a bag of frozen corn, and one leftover roasted sweet potato. Simmer until hot. Amazing. 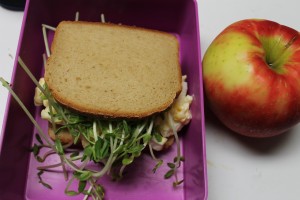 Pressed for time, but the egg salad was divine. My recipe? Three hard-boiled eggs with canola mayo and a small chopped sweet onion. 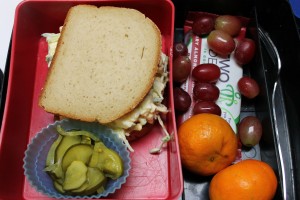 Next time I’ll chop up the “bread and butter” pickles and put them in the egg salad. 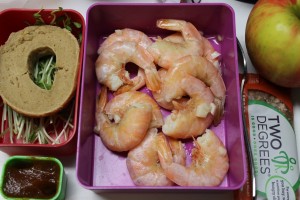 The shrimp was messy but terrific. Highly recommend sauteeing with garlic.