According to a study in Pediatrics,  90 percent of the perishable items in packed lunches (lunches sent from home to school) were kept at unsafe temperatures. The article goes on to state that the CDC says that perishable foods kept between 40 and 140 degrees Fahrenheit for more than two hours are no longer safe to eat. Wow.

There is often no refrigeration for lunches that kids bring from home because there’s no place or money for fridges. Should schools start offering children a place to refrigerate their lunches? Is there a rampant bacteria issue in packed lunches? Thoughts?

Well, I see another argument in favor of changing school lunch! At least it’s not sitting in a warm classroom all morning!

A few weeks ago, my son and I visited a family friend who lives relatively close by (Hello! She reads the blog). Every year she grows a garden from her own saved seeds. Each summer she says we should stop by and get some produce from her garden. I never took her up on it before. But since I had my son with me when we visited, I decided to inquire about what she had growing. She took us back to go through the garden. She grabbed a couple small tomatoes, a big bunch of broccoli, a couple green beans, and a banana pepper. My son and I carried them back to the car and we drove home.

Back in our kitchen I asked my son, “What do you want for lunch?”

He looked at me and gestured wildly, “Broccoli and tomatoes!!” Like duh, Mom.

I was shocked. My kid likes cooked broccoli and tomato sauce on pasta, but raw? He never ate raw tomatoes or broccoli before.

So I got out a cutting board and sliced up one tomato. He proceeded to eat three slices of raw tomato.

Then he grabbed the broccoli and nibbled on it until it was gone. I barely got a bite.

People talk about how kids will eat what they grow, but I wondered if that was *really* true. I no longer question it. My kid will eat what he sees other people growing. 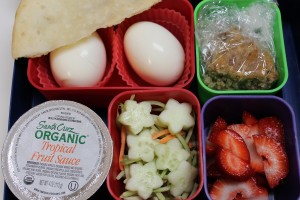 The nectarine cake was a wonderful flop (no recipe to share – I just read a cookbook). I was trying for a nectarine/apple crumble, but it turned out cakelike. I don’t bake as much as I want to because I’m still learning about gluten free flours and when I do bake something sweet, I have a tendency to scarf it down. I have no willpower! Day care menu: Battered cod, pasta with alfredo sauce, peas, and diced peaches with two snacks of shredded cheddar and small frozen yogurt. 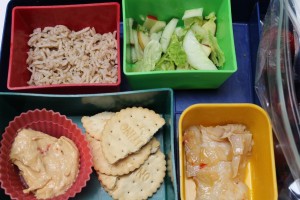 My husband made the rice Indian-style. He’s not Indian, but loves Indian food. Again, he’s just reading a recipe. My son avoided the rice, but ate everything else. Day care menu: cheese ravioli, bread, green beans, and pineapple with two snacks of banana pudding and hummus with crackers. 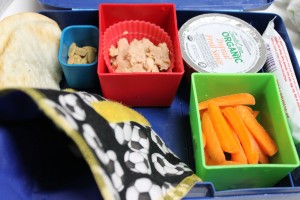 What’s in the bag? 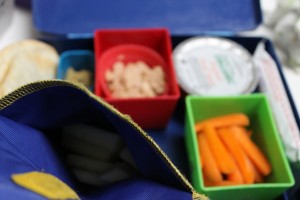 Hello apple slices! I asked my son if he wanted a sliced apple or sliced kiwi in his lunch and he said apple. Yeah, I know there are two apple products in his lunch, but what can you do. I instructed my son to put the tuna on the pita to eat it. Day care menu: Chicken and rice casserole, carrots, and applesauce with two snacks of string cheese and soy nut butter on crackers. 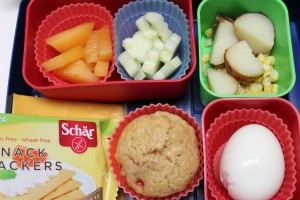 Lots of finger foods here. I wanted to make it easy on the kid! Day care menu: Turkey on wheat, vegetable soup and bananas with two snacks of pumpkin bread and pretzels with cream cheese. 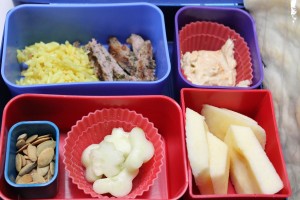 The rice, lamb, and hummus were restaurant leftovers. We had overnight guests the previous night so it was so great to have a little shortcut when I was preparing his lunch that next morning! Day care menu: Diced ham, cheddar potatoes, baked beans, and apple slices with two snacks of an apple muffin and a lemon Italian ice.

24 thoughts on “Lunch Wrap Up: First Two Weeks of August”