Edited to add: I have had this post queued up for awhile — finally decided to publish it even though it’s super weird…

It was the last couple days of school. Kids were gone. I was cleaning my room and boxing up tons of stuff. I wiped surfaces and peered at items on shelves that I’d forgotten about. That’s when I found a paper sack. I opened it and found ketchup packets, extra sporks, and this… 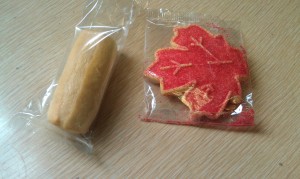 Oh god…NO! The breadstick was from Day 156 and the cookie was from Day 148! I put them in that bag and shoved them into a corner on a shelf.

I noticed right away that the breadstick was super hard like formica. Then I noticed the thinest layer of green mold: 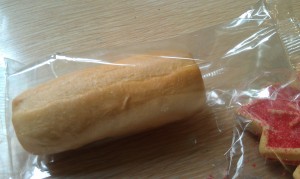 It’s barely visible in this photo — it’s like dust!

Seeing the mold on the breadstick made feel a little reassured. The breadstick *will* biodegrade one day! But what to do with it now? I didn’t like the breadsticks when I was eating school lunch. But a six-month-old breadstick with a faint dusting of mold? Inedible. 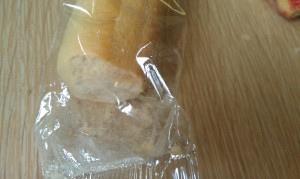 Flakes of bread came off, but it didn’t crack.

So I banged it harder on my desk… 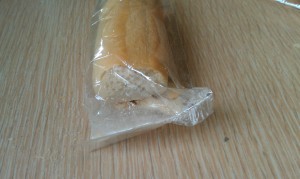 I got crumbs all over my desk, but the breadstick proved to be virtually indestructible. 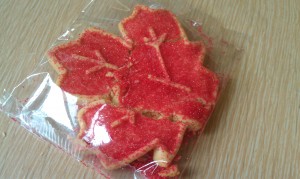 It broke easily in my hands just like it would have six months earlier. Actually, it looked good enough to eat (cookies are my weak spot). I’m left wondering why I didn’t eat it back in 2010… I ran out of time, which happened frequently or I was concerned about any funky artificial food dyes (petroleum-based and created in labs). I guess I decided to stash it in a bag for “later.” Sugar really doesn’t decompose, does it?

So what did I do with the breadstick and the cookie? I quietly put them back in the bag and threw them out. I had no interest in hanging on to them for old times’ sake.

16 thoughts on “Breadstick? Meet my desk”