When you have a sick child, your whole world shuts down. My son had a fever for over week, occasionally spiking 103 – 104. The fever responded well to a cocktail of fever reducing meds, but once they wore off, he curled up into a little shivery ball and I just snuggled him. Naps fell apart. Twice time he napped for three hours straight, but most of the week he was having 20 minute snoozes randomly. Night-time sleep was rough too. It was a doozy of an illness, but thankfully he has been fever free for more than a day now. I don’t want to jinx myself by saying “it’s over,” but I’m cautiously optimistic.

He’s been sick for almost the entire time I’ve been off of work. It’s been pretty demoralizing. Not only do I not have enough time to get everything done around the house and online, but I start thinking that maybe he should be an only child. It’s too hard watching your kid be sick. Go through it all over again? My heart can only take so much. 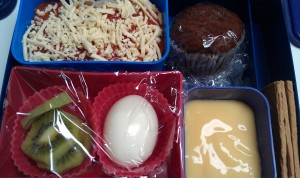 He barely ate any of his lunch. Looking back I think it was starting to get ill. He’s also not a big pasta fan. Actually he never has cared for pasta or bread, even back when he was eating gluten. Day care menu: Battered cod, pasta with alfredo sauce, peas, and diced peaches with two snacks: shredded cheddar and strawberry frozen yogurt 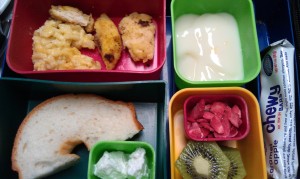 None of this got eaten. I sent him to school and they called me a short time later to say that he was not acting like himself. I raced over there and took him straight to the doctor. The lunch hung out in the car and then I left it on the counter. He was in no mood to eat. Day care menu: Cheese ravioli, bread, green beans, and crushed pineapple with two snacks of banana pudding and hummus + crackers.

No lunches this week (week of July 11) as he’s been sick. Meals have been thrown together and ignored or picked at. I’ve just “fed on demand” as the doctor told me liquids were more important. He even refused popsicles. I’m happy to report that my son hate a ton today, which is what he does after an illness. For a day or so he eats double portions of food. Then my husband and I breathe a sigh of relief.

Have I mentioned that I love to shop? I can shop anywhere for anything. Considering what we make, it’s not a good thing. Looking over my finances, I’ve realized that my Whole Foods “binges” are not sustainable. I cannot go into Whole Foods and spend less than $50. In fact, it’s usually close to $200, sometimes once a week. My husband’s philosophy is that “if you eat it, it’s never bad to spend money on food.” I like that philosophy, but I’ve been indulging far too much. I need to budget better.

The CSA subscription seems cheap to me though. We spent $350 for 10 weeks of veggies, every other week. We’re getting enough veggies for two weeks and so it comes out to a meager $17 a week. Next year I’m going to get a fruit share as well. It’s economical and saves me a treacherous, tempting trip to the grocery store. I just can’t stop filling up my cart with impulse buys (hello cookies!).

I’m going to make more of an effort to include cost in my calculations of lunches and various recipes. I can’t be money blind any longer or I’ll go bankrupt!