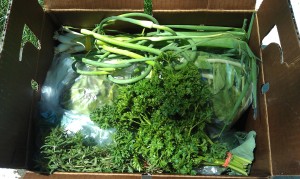 I’m officially in over my head. I don’t know what some of this stuff is! 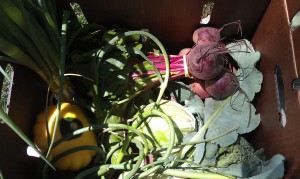 And underneath the bags of lettuce… 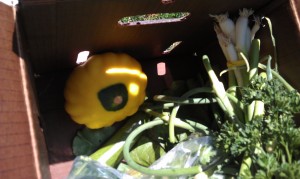 That yellow thing?? Green ropes next to that? You eat and cook that??

I picked up this box of yummy foods, some of which I had never seen before, and headed over to a friend’s house. My husband, the kid and I were scheduled to leave on a vacation far, far away by plane the following day and so I knew that I had to give some of this produce to my friend. I gave her some parsley, some lettuce, some spinach, and the entire bunch of the mystery herb (which I think you guys identified as oregano). Yeah, I chickened out on the mystery herb.

I knew that the rest of the the veggies would survive in our crisper while we were gone.

So I’ve made salad again. A lot of salad. But before I get into that, I wanted to share that I made radish chips with last week’s radishes. I didn’t know what to do with the radishes as I find them bitter. So I Googled ‘radish recipes’ and found a few for radish chips (source, source, and source). I figured since kale chips are such a big hit with my son, these guys would be too. 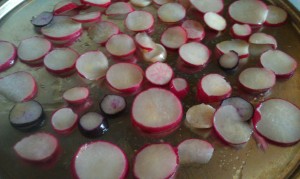 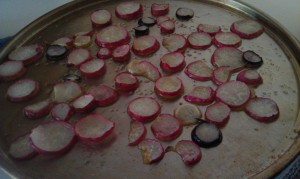 My husband and my son thought they were pretty good. Truth be told, I found the radish chips to be on the bitter side. But they must have left an impression on my son. Every now and then he mentions that he loves radishes. I guess I’m going to have to get more.

The garlic scapes are amazing by the way. I only just figured out what they were and so I cooked with them tonight. I would never have had the courage to buy these, but since they were thrust upon me, I had to figure out how to cook with them. All I did was slice them and fry them in a pan with some olive oil (then added andouille sausage). It’s like a garlion (garlic/onion). Smells terrific frying in a pan. I’m hooked!

And I made a beet salad… 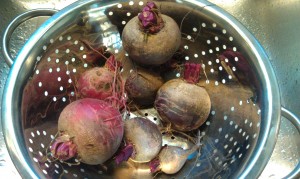 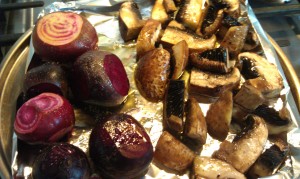 Cut off the ends. Douse in olive oil. Sprinkle salt. Oh and I roasted a portobello mushroom too (not in the CSA box) 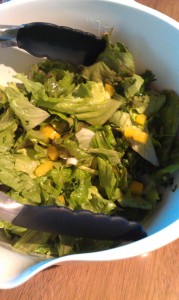 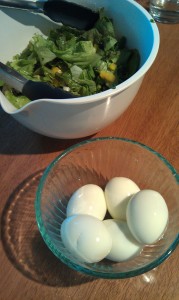 I love eggs. I didn’t cut them up and spread them over the greens because that’s just too messy. Better to cut them up over individual plated salads. 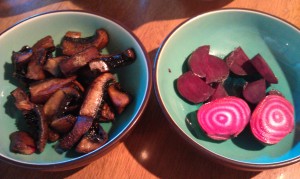 Some of the beets look psychedelic! 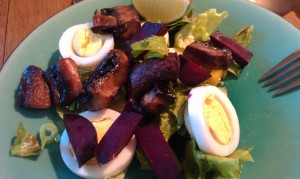 I’m not going to give much of a recipe here. Here’s the recipe I used to roast the beets. Also, I’m working on perfecting my portobello roasting formula. Usually I like to try something twice before I share it. And I’m not sure I can eat that many beets again. They were so delicious that I ate a ton of beets. My husband and my son were not as crazy about beets as I was. I thought they were amazing. When you eat that many, your plate and hands get stained with bright purple beet juice.

But later I paid.

The next morning I used the bathroom. My pee was pink! The only reason I’m revealing this highly personal information is to warn you. I panicked that there was something wrong with me like some kind of infection or kidney issue, even though I felt fine. I thought I would have to go to the doctor. But I consulted Google and found out that if you eat a lot of beets, you may pee pink. Or other things. Ahem.

So I waited because I felt no pain. Sure enough, it was very temporary.

Oh the perils of a CSA box!

(And I’m taking suggestions for the squash! I’m thinking I’ll roast it.)