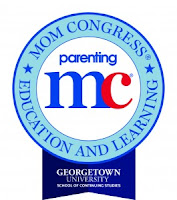 I had the honor and privilege to be a part of a terrific panel about school lunch and student health at Mom Congress back in April. I didn’t write a recap post right away, because it was too hard to put everything into words. It felt like a dream to be able to meet terrific moms from all over the country and to watch the speakers who I had only read about.

My panel included Seth Nickinson from Jamie Oliver’s Food Revolution, Kelly Meyer from Teaching Garden, and Margo Wootan from Center for Science in the Public Interest. Most of what they said about school food I had already heard and knew. I was so honored to be on the panel. Unfortunately, I was the last one to speak and time ran out for me to share most of my ideas about school lunch reform with the delegates. Then there wasn’t much time for questions, which was a huge bummer. The questions we did receive were excellent and thankfully I was able to contribute then. I don’t have anything to share with you from my panel because I was not taking notes then! I was a ball of nerves!

Parenting magazine selected one mother for each state in the union to be a “mom delegate” after a nationwide application process. In our pre-conference conference call we were informed that the Mom Congress attendees were already established advocates in their communities. That was no joke — the women in that room were amazing. Most of the attendees didn’t have a web presence, but a couple did. Imagination Soup and Inspiring Moms were two moms who were selected. (Forgive me if I’m forgetting some other moms who are also online). After I spoke (thankfully the first session), I spent the rest of the conference soaking up the speakers.

There were too many inspiring speakers to list here. But I wanted to share with you my thoughts on the two speakers most closely aligned with the goals of Mom Congress – to get moms all over this country fired up about education advocacy in their communities:

Secretary of Education Arne Duncan – One of the amazing things Secretary Duncan shared was that when President Obama went to South Korea, he asked their leader what was the biggest problem that South Korea faced in terms of education. South Korea’s leader said that the biggest problem was that parents were complaining about the state of education. For example, he said that even the poorest parents were insisting that their children learn English not in second grade, but in first grade. Secretary Duncan said he wanted our country to have that same problem. He said that there are failing schools, but that in surveys most parents say they are satisfied with their children’s education. He said it’s a case of cognitive dissonance.

Another thing that stuck with me that Secretary said — the school does not belong to the principal. The school building belongs to the community and to the kids. I’ve thought long and hard about that statement; I could not agree more. Secretary Duncan elaborated by saying that schools should be open longer than just school hours and that non-profit organizations (YMCA and community centers) should be running after-school, evening, and weekend programs where appropriate. How many of our schools are just closed and locked outside of school hours in communities where the kids are in desperate need of additional enrichment?  Sure there are security issues and things get stolen sometimes, but appropriate safeguards could be in place to prevent that.

The gym, the auditorium, even the computer lab sit silent in communities that lack close access to these resources. I can’t see my principal giving up the keys without a fight but, managed appropriately, it could only benefit the students and their families to get extended access to the school building.

He also mentioned that our schools are doing too much testing — I couldn’t agree more!

Students First Michelle Rhee – Whatever you think of her, I found her to be more compelling in real life than much of the press she has received. Michelle Rhee was the chancellor of DC Public Schools and made some sweeping reforms that angered many teachers and parents. In person I found her to be less bellicose than everything I have read about her. She believes that bad teachers and administrators are killing our schools. Although she gets a lot of press for firing lots of teachers, she mentioned that she fired a third of the principals in that district.

I think that she is a little too blunt and has to work on her tone and approach. The Mom Congress delegate from DC got up and asked a question about how to continue the reforms that Rhee put in place. Unfortunately, the average length superintendents stay in their position is three years. Not long enough to see their changes through. It sounds like now that she is gone some parents appreciate her work more fully.

I subscribe to emails from Students First (Rhee’s organization). Frankly, I find many of her emails to be grating. I think she could work on not being harsh. However, in person I agreed with much of her speech. She asked the audience if any mom attending would be okay with their child being in a class with a teacher who was being professionally developed because they weren’t successful in the classroom. The teacher gets a “do over,” but the kids don’t get that year back.

There were so many amazing moms and speakers there. It was hard for me to wrap my head around everything I heard, discussed, and (hopefully) contributed. I haven’t had time to review my notes more exhaustively. Actually, I usually don’t take too many notes. I only write down what I really, really want to review later. I hate having paper clutter. If I review my notes and find some other nugget of information I found valuable, I will share it at a later date.