Last month my dad said this to me, “You’re a yuppie mom feeding your child a fad diet.”

Frankly, it made me chuckle and roll my eyes. My dad is a loving guy, but blunt and pretty rude. He shoots his mouth off all the time. Luckily for him, my husband wasn’t around because he would have hit the roof.

I let my dad vent a little about the inconvenience of my son’s, and now my, diet. I was visiting him and we were driving somewhere.

Then I started talking. I had to remind my dad that his grandson was having chronic diarrhea. I remember thinking last fall, “How exactly does one toilet train a two-year-old who never has a solid poo?” I was at the end of my rope. I had my son tested for allergies (lots of foods including milk but not wheat — huge regret now that he’s gluten free and accurate testing would require him to go back on gluten). Anyway, nothing came up last fall. Also my son couldn’t breathe. My son was prescribed a daily steroid and we received an at-home nebulizer. I was heartbroken.

But I wasn’t ready to give up. I pulled my son off all cow’s dairy products (he was already drinking goat milk) and then in October I pulled him off all gluten and wheat products. It was a last ditch effort.

And it worked. This past winter, my son was still sick randomly, but we went weeks without illness — virtually a miracle.

I told my dad that I’m not doing this because it’s fun or trendy or that all the moms are doing it. Oh no, I don’t know another mom who has had to go to this extreme. But I also don’t know another kid who had eight ear infections by the time he was 15 months old. Thankfully my son was very verbal and social and was developing normally in other ways. But he had ingested so many antibiotics, endured so much pain in his ears, and even underwent eat tubes surgery (that was a godsend)…but still didn’t stop the ear infections from coming…

I had to remind my dad that just coincidentally after the little guy went gluten free, my son went through a pretty significant growth spurt. He’s thin, but he is quite tall for his age now.

Also since my son isn’t having so much trouble with his tummy, he rarely tantrums. Terrible twos? He’s basically an angel.

Oh yeah, my son is toilet-trained now too! Woot!

My dad shut up right away.

Lunch pictures after the break…. 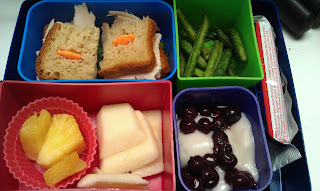 The crunchy green beans are from Trader Joe’s. Basically they are like veggie chips. I’d love to try my hand at making them at home. And the story behind the blueberries in the yogurt? Last weekend I made pancakes and then realized we had run out of syrup. So I searched the cabinets and found a can of blueberries for making a pie. We poured the blueberries over the pancakes and they were divine. Then I thought blueberries would liven up regular yogurt. Day care menu: Cheese ravioli, bread, diced pears, green beans with yogurt and fruit for snacks. 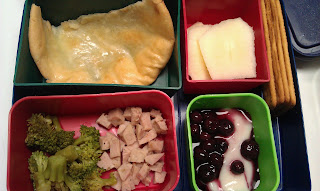 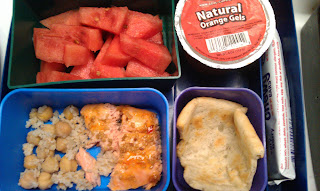 My son saw watermelons at Whole Foods and so we left with one. He was thrilled. I put the jello in there because the other kids were getting ice cream. Day care menu: American cheese sandwich, tomato soup, mandarin oranges, peas with fruit and ice cream as snacks. 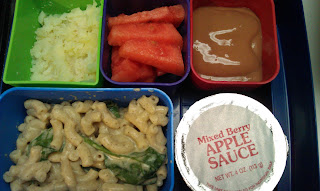 The other kids were getting mashed potatoes so I sent some for him. Day care menu: Diced ham, mashed potatoes, applesauce, green beans with fruit and yogurt as snacks. 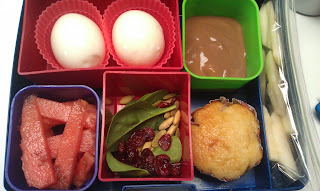 Written on our daily summary form: “He cleaned his plate!” Everything was a finger food (aside from the yogurt), which might have helped. Day care menu: Ground beef with pasta in cheese sauce, bread, diced pears, diced carrots with fruit and yogurt as snacks. 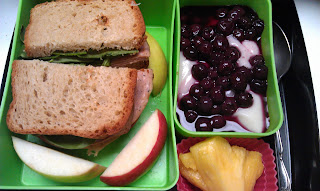 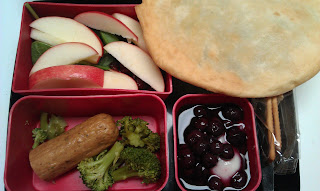 I’ve decided that even people like me who aren’t big salad people can still enjoy a salad. It just has to be small and loaded with my favorite things. I put on cranberries and maybe even pecans. I don’t remember. 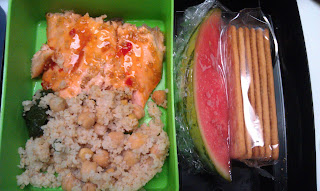 Salmon, brown rice couscous with chickpeas and spinach,
watermelon, crackers
Leftovers! Most of the spinach was gone at dinner so there wasn’t much left for my lunch.
Thursday 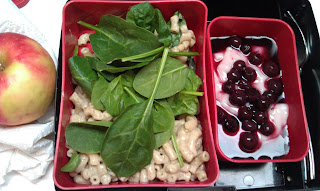 Meatless Thursday? I made the mac and “chreese” with goat milk and I didn’t have an adverse reaction. Yeah, maybe I’m healing! 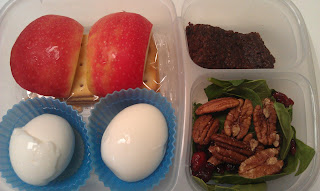 Yes, even I have to eat brownies every now and then. And I think that I’m not having trouble with chocolate anymore. It really has to be gluten free though. I made the brownies from a package (Bob’s Red Mill) and instead of butter I used coconut oil (at room temperature it’s solid and white). Delish! The 13 by 9 pan was gone within 72 hours!