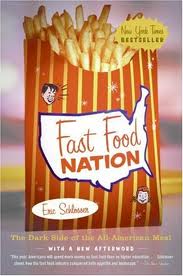 I love reading. I’m not sure I’ve ever really mentioned that before. Before I had my son, I kept an impressive spreadsheet of the books I’d read, organizedby year. After I had my little boy, I stopped reading. I stopped doing a lot of stuff (some of it was exhaustion and a touch of depression) and just focused on my baby (I was obsessed with him). I think it wasn’t until my son was six months old that I picked up a book again. And I certainly did not have time to catalogue it in Excel.

I have already read Fast Food Nation, but it was before I became a mom. I’m basically a different person. I would have never eaten school food for a year if I hadn’t had my son. Although I was slightly aware of some issues in food politics, I hadn’t given that much thought about what kids eat. Even considering my profession, it hadn’t sunk in until I had my little one. I’m not saying you have to be a parent to care about the food kids eat; I’m just saying that for me having my son was a tipping point.

I’m anxious to read this book now that I’m even more aware about these issues. Eating school lunch for a year fundamentally changed my relationship with food and that of my family. I’m going to think about every mouthful I ingest.

What do you think of this book as a choice for book club? Have you had any trouble getting it?

We finally have a winner of Michelle Stern‘s cookbook: The Whole Family Cookbook. I blogged about her cookbook a whole half of a month ago — there’s no excuse for my tardiness! The winning number was: 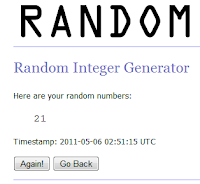 For those of you who are bummed about missing out, I’ll be reviewing a book about children’s health and wellness later this month. Don’t worry, there will be another giveaway!

9 thoughts on “Lunch Literature Book Club (and a giveaway winner!)”