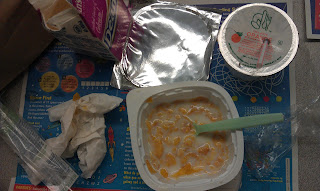 Kids are not offered chocolate milk for breakfast; the only option is white milk. My students like cereal and I’m happy that the string cheese is there. When I’m at home eating breakfast in the morning, I’ll eat cereal by itself most of the time. Instead of cheese, I’ll eat fruit with my cereal. For breakfast today I ate cereal and half a peach. Thoughts on cereal?

29 thoughts on “Breakfast in the classroom: example six”