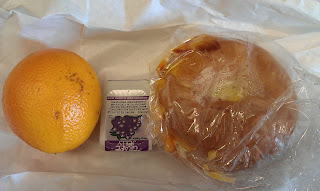 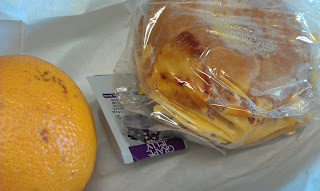 One of my students didn’t want the breakfast so I thought, “Perfect photo opp.” I opened up the sack and immediately was hit by an aroma of hot sandwich.

I could have gobbled it down right there on the spot, but I’d rather not make a run to the bathroom a couple hours later (I always thought it was just “fiber” causing me to run to the bathroom. Since going gluten free after the project ended, I realize that it was gluten).

I don’t know what the ingredients are in the sandwich (since I don’t have access to ingredient information), but the aroma was tempting. I think I was a little on the hungry side. And how is the jelly supposed to be used exactly? As a dipping sauce for the sandwich? I can’t say.

Another concern: the sandwich was heated up in plastic. That’s a worry, but sadly I’m not sure it can be avoided. My school has a kitchen, but it’s small. Everything is trucked in and meant to be heated up. Actually many schools don’t have large kitchens (and some don’t have cafeterias) because they were built in a time when children went home for lunch. Any ideas on how to eliminate that packaging?

After I blogged about one of the previous breakfast sandwiches served at my school, where I sort of slammed the breakfast sandwich, I tried to make one at home on the weekend. I made an open sandwich with a egg (over easy) and salami. It was really, really tasty. I wish I had time to do that every morning!

23 thoughts on “Breakfast in the classroom: example four”