Yes. You read that right. I ate lunch at school again. But it wasn’t my school. It was a different school – the Academy for Global Citizenship.

They serve organic school lunches. And most of my lunch was gluten-free. How do you like them beans?

I told you how I met the founder of the Academy for Global Citizenship, Sarah Elizabeth Ippel, in a previous post. She invited me to lunch, but our challenge was finding a day that I was off, but that her school was in session. It turned out we had one choice: March 7th.

It’s not hard to locate the school on a map, but it’s easy to miss from the street. 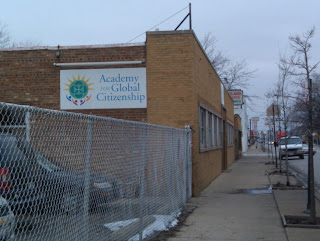 Don’t judge a book by its cover

It is a testament to Sarah Elizabeth’s vision that she is pulling it off with astounding success rates:

If you assume the school is located in Lincoln Park, think again. The Academy for Global Citizenship came about to relieve some of the overcrowding among schools on the south side of Chicago. If you drive through the area, there are boarded up buildings and desolate train lots. It fits the description of “food desert.”

According to Sarah Elizabeth, roughly 80% of her students qualify for free or reduced school lunch. Additionally, nearly 40% of her students are English Language Learners. It’s certainly not what I would expect from a school serving organic food.

Walking into the school, I saw the wall-sized world map at the door and other colorful decorations and posters in the hallway. Halfway down the main hallway, a small group of cheerful kids were waiting in line for lunch. As they entered the cafeteria, they saw a poster of “where the food comes from.” 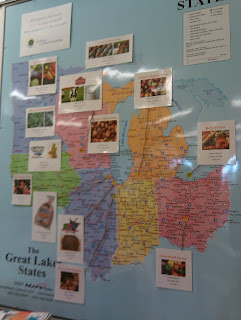 Milk from Wisconsin, Bread from Chicago, Tomatoes from Michigan.

We joined the kids in the lunch line and went straight to the main attraction: the food. I felt like I was having lunch with an old friend as she explained the history of the school and detailed her vision for the future. (Note: I feel so lucky that eating school lunch for a year enabled me to meet so many amazing people. Sarah Elizabeth is one of those people I’m happy I have met.)

Talking to her, I got the feeling she is going somewhere, but the school is already on the map. It was one of the first schools to earn the prestigious Gold with Distinction rating under the HealthierUS School Challenge. 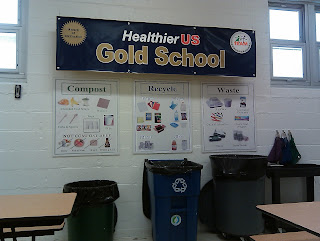 They even compost (left, under sign)
The Deputy Secretary of Agriculture, Kathleen Merrigan, visited the school to award them with the distinction in person. How cool is that?

Sitting down at the table, I noticed that there was water and napkins readily available for the kids: 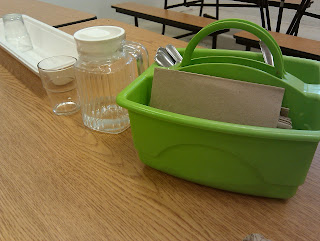 Reminds kids that they are sitting down to a real meal

But what about the food? 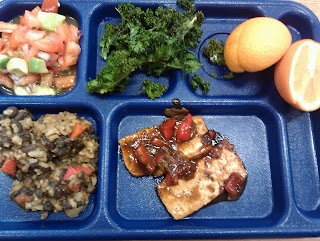 Sorry it’s blurry – I was shaking with excitement!

On the menu was “Brown rice and bean burrito with BBQ tofu steaks.” I declined the whole wheat tortilla, but I gobbled up the tofu, beans and rice with peppers, pico de gallo, kale chips and a sliced orange. I’ve been eating kale chips at home, but I never thought I’d see them on a school lunch tray.

Everything was delicious and prepared onsite! I was even able to meet the chef and chat ingredients!

But what did the kids think of the meal? I moved over to a table and asked one kid – let’s call him “Tim.” 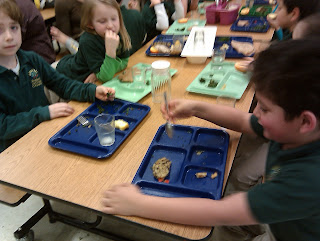 The kids enjoyed the food – see it’s all gone! Sarah Elizabeth told me that initially there was some resistance and wonder about foods like kale chips, but after they saw them repeatedly on their trays and began harvesting these veggies in their schoolyard garden, they got used to new and different foods. It helped that Sarah Elizabeth invited families in for food tastings after school where family members not only got to sample lunch cuisine, but received recipe cards as well.

I chatted with “Tim” about his food. He said he liked it. We asked if he had had recess yet and after he responded, I told me that I worked at a different school that had no recess. He looked perplexed and asked me, “Well if they don’t have recess today, can they get recess tomorrow?”

“No Tim,” I replied sadly, “They don’t get recess tomorrow.”
He said that made him feel “sad.”