I don’t remember the last time I felt this good. I think my body heals with every passing day, but this week I’ve felt especially good. Being gluten-free and dairy-free agrees with me. I’ve lost about 6 pounds in the 11 weeks since I stopped eating school lunch. I’m almost at my pre-pregnancy weight.

Mornings this week have been crazy as usual. My priority is my son and his lunches so I have less time and attention to devote to what I’m going to eat for lunch. I just throw something small together. One of the main reasons is that, just like my students, I have so little time to eat at school. I bet many of you have looked at my lunches and thought, “That doesn’t seem like enough.” Believe me, it’s a very short lunch period and what I pack I can’t always finish.

So we made kale chips. They blew my mind. We used this recipe for kale chips. I can’t stop stuffing my face. They don’t look very appealing in my photos, but they are unbelievable. My son just crams them in his mouth. In fact, we were playing together on the couch and I pretended to nibble him (toddlers are delicious!) and he turned to me and pretended to eat my arm and said, “Eat you like kale.” I almost fell onto the floor.

And I made purple coleslaw. I had never made coleslaw before, but when I was at the store I bought a purple cabbage. I chopped up half a cabbage, one apple, and one carrot and used this Honey Lime dressing. My husband said it was the best coleslaw he ever ate. It was another one of those things I just couldn’t stop eating.

Click below to see our lunch pictures (I’m putting jump breaks into these posts so people can avoid photos of my boring lunches when they land on my blog): 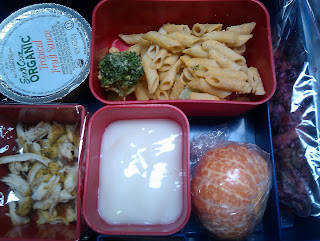 Last weekend we went out for dinner to a place that had a gluten-free menu. So I ordered chicken kabobs and shredded one piece for my son’s lunch. When I realized I only had one broccoli left in the mac and chreese (also a leftover), I packed some of the precious purple coleslaw (far right). He ate everything per daycare, which I think means that he ate most of the food. Daycare menu: American cheese sandwich, chicken noodle soup, applesauce, peas with fruit and ice cream as snacks 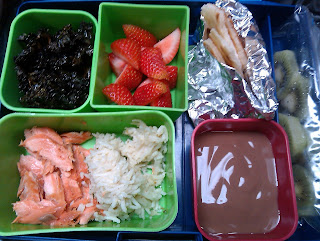 Salmon, rice, kale chips, strawberries, pita bread,
chocolate coconut yogurt, kiwi slices
The daycare folks said he ate everything, but he told me that he didn’t eat the rice, which doesn’t surprise me since he’s not a big rice eater. I planned this meal without the daycare’s new monthly menu because it wasn’t available the night before. Hello March! Daycare menu: Diced ham, rice, orange wedges, green beans with fruit and yogurt as snacks.
WEDNESDAY 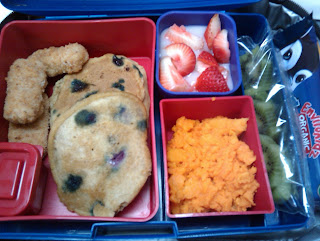 I caved and gave him the gf fish sticks that we bought on sale at Whole Foods. The other kids were eating chicken nuggets and I wasn’t sure how thrilled he’d be about the pancakes. At home he’s not much of a pancake lover. He doesn’t eat as well at our dining room table as he does around the table at daycare. Even though he’s eating different foods than the other kids, peer pressure still works great. Well, the daycare folks said he ate everything. Daycare menu: Chicken nuggets, mashed potatoes, diced peaches, diced carrots with fruit and yogurt as snacks. 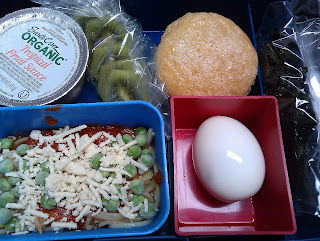 We have discovered daiya! It was on sale at Whole Foods, but regardless wow does that taste like cheese. Our son loved it. Also the kale chips are back. I made them the night before, but they wilted in the fridge so I baked them again in the morning to crisp them up. He ate everything. Daycare menu was: Ground beef, pasta, bread, diced pears, peas with fruit and blueberry muffins as snacks. 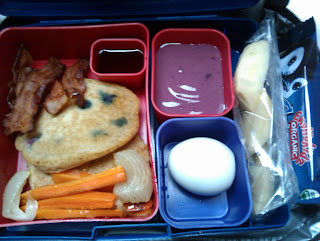 Pancakes again because I figured that since he liked them earlier in the week, I had a chance that he would eat them again. I roasted simple veggies the night before and he like them, even the onions. They say he ate everything. Daycare menu: Pasta and meat sauce, mandarin oranges, green beans, with yogurt and bread with soynut butter as snacks. – Pasta two days in a row on the daycare menu — strikes me as odd. 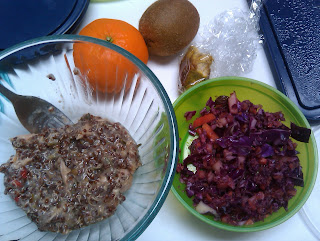 This is what happens when you have less than five minutes to assemble lunch. Random and weird, but it fed me just fine. 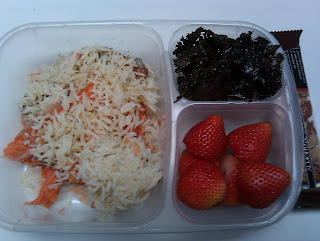 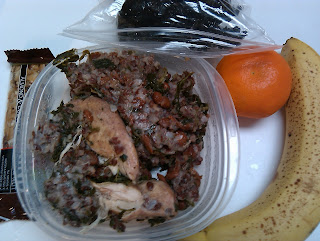 I decided to try to make my own crockpot meal (translation: no recipe) with red rice, chicken, chicken broth, pinto beans and spinach. It was very, very plain. My husband and son didn’t care for it so I took it for lunch for three days in a row. 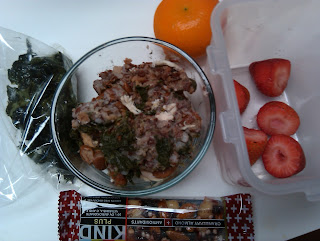 I used to have to avoid eating too much citrus because I thought it gave me canker sores. Nope. It was the gluten. I haven’t had a canker sore since I stopped eating gluten and now I can eat all the citrus I want. 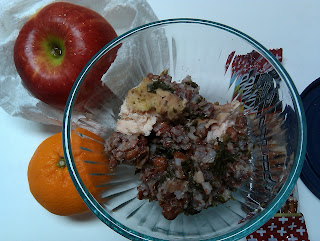