My dad hates eating salad. He calls it “rabbit food.” He’s never been very good at forcing himself to eat something that’s good for him. I mentioned that my mom would make a salad to accompany pizza at our house, but in general I don’t remember eating a whole lot of salad at home.
Confession: I didn’t really know what kale was until a few years ago. 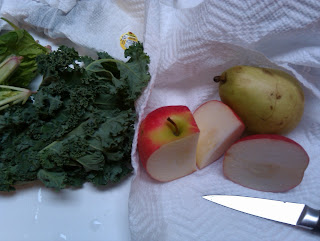 But I know kale is good for me and so I’ve dutifully tried to eat it at home. Every time I’ve tried to cook it on the stove it has tasted less than delicious. A kale fail – for the twitterfolks #kalefail (To be fair I know I still need to try making kale chips.)

What happens when something doesn’t go right in the kitchen? Well, if you are less than ambitious like me then the bad experience in the kitchen is not reinforcing and you just stop shopping for that food.

After a brief appearance, kale was swiftly removed from the shopping list. 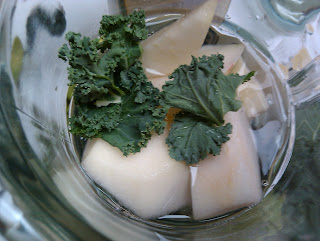 That was until I started thinking about doing some kind of detox after my year of school food. I never went ahead with a detox diet because it seemed like a lot of work — not to mention I was sick and tired of messing with my diet.

I was still interested in eating non-inflammatory foods though. So I started an internet search. That’s where Nourishing Meals comes in. I met Ali and Tom at BlogHer Food. When I noticed that their website and book contained information about a 28 day elimination diet, I was intrigued and bought their book. This month I decided to be bold and try to make their minty green kale and spinach smoothie.

Kale has never tasted so good. Even my husband remarked that he had never enjoyed kale until he drank this smoothie. 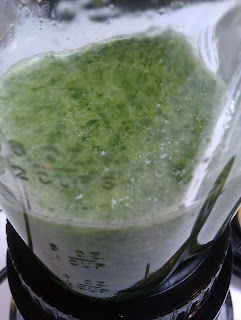 Ali and Tom share a lot of smoothie recipes on their website so I’m not going to share the exact recipe from their book that I used and loved (I don’t have their permission). However, you can watch a video of them making a green smoothie with their twin two-year-olds. The video could not be any cuter and you can see just how quick and easy it is to make a green smoothie.
Here’s to rabbit food smoothies! Cheers!
My smoothie tips:
Get a blender or dust off of the one you’ve got Considering my audience, you probably already have a blender. We have a terrific blender, which was a wedding present. Before that we used a blender my husband got at a garage sale for $5 when he was in college. It served us well for many years. In fact, my husband loved that blender so much that he disassembled it and turned it into a lamp. He recently bought us an immersion blender so we are now fully equipped.
Don’t be afraid to experiment Try new fruits and veggies. Use what’s on sale at the grocery store. Change up the smoothie base. I had never really tried a water-based smoothie until I made their green smoothie. I didn’t miss a milk base at all.
Kids love being involved Most kids like to push buttons and see what happens next. My kid thinks what’s happening in the kitchen is fun and cool, but he is scared of the blender and will run to the couch and bury himself under a cushion. We have gotten him to taste and drink some of the green smoothie, but he doesn’t enjoy it like we have been.