This week I’ve only had one night of uninterrupted sleep. The kid keeps waking up in the night wanting to eat “panda puffs” (cereal). He went through two weeks of barely eating due to illness and now we’re just finishing up two weeks of great eating, but the night-wakening is getting out of hand. I have realized that it’s worse for me to have an interrupted night of sleep of eight hours than to get only six hours of continuous sleep. I need to hit REM sleep or I’m not myself.

I feel a bit like a zombie. I just keep telling myself a parenting rule (I probably read it on the internet somewhere, but I don’t know where so sorry I can’t attribute it to someone) — wait a few days and it will change.

My husband and I were both off on Monday and we had family in town too. For lunch we had the chili and cornbread you’ll see in our lunches later in the week… I forgot to photograph my lunch, but sometimes I need a break too.

Photos after the jump…. 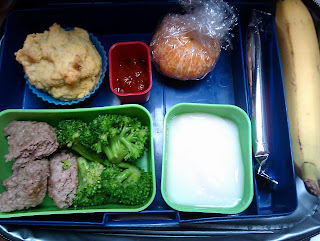 ﻿Buffalo burgers, broccoli, cornbread muffin, ketchup,
mandarin orange, yogurt, bar, banana
Our kid is a meat eater and my husband is all about getting “fatty meat” into our son. Months ago at his two-year-old appointment my son was in around the 80th percentile for height and around the 20th percentile for weight. Our little guy was a really chunky baby (think 80th percentile) but grew tall and he burned it off by running around. My husband is a little worried about not have a chunk anymore, but our kid looks great (and tall for his age too). The daycare folks said he ate it ate his entire lunch and the snacks. Daycare menu: ground beef, mac and cheese, bananas, carrots with fruit and ice cream as snacks.
WEDNESDAY 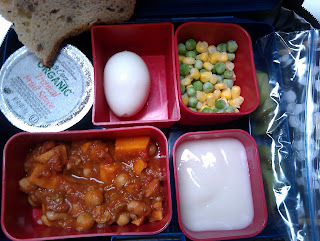 Beef/chickpea/sweet potato chili, applesauce, egg, bread, corn/peas,
yogurt, sliced kiwi, pretzels in bag
This is the chili I made on Monday. I bought “grass fed” beef, but I didn’t use very much of it in the chili (1/2 lb). I used a chili recipe from No Whine With Dinner as a guide, but changed it up with chopped sweet potato and cans of chickpeas and cannelloni beans. It was amazing — the key was browning the meat in olive oil, garlic and onions. Then I just added whatever I pleased, after draining the fat. Daycare menu: hard-boiled egg, wheat bread, applesauce, peas with yogurt and pretzels/cream cheese for snacks.
THURSDAY 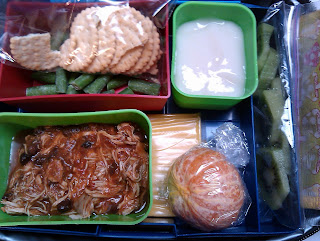 Chicken taco meat, green beans, rice vegan cheese and crackers,
yogurt, mandarin orange, sliced kiwi, rice chips in bag
Often I get emails asking for recipes, but really I only read a cookbook! This time I followed the sage advice of Stephanie O’Dea in Make it Fast, Cook it Slow. The chicken tacos came from a crockpot. My son was nuts for it the night before (so was my husband and it was amazing to have dinner waiting when we got home). The daycare folks said he didn’t eat it all while he was there though. Oh well. Daycare menu: cod nuggets, wheat bread, tomato soup, mandarin orange with fruit and and cheese/crackers for snacks.
FRIDAY 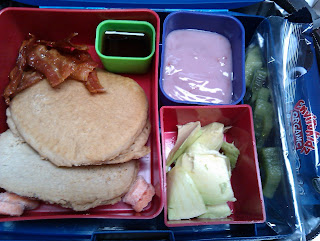 Pancakes (Bob’s Red Mill gf pancake mix), bacon, syrup,
frozen carrots in the corners, avocado, yogurt, sliced kiwi, bar
He ate all of this per the daycare folks! When he falls down and bangs something, he’ll say “ice pack,” and so we dutifully open the freezer and get him something cold. Sometimes it’s an ice pack, but other times it’s some frozen veggies. He thinks this is hilarious and then wants to eat cold veggies. (Bonus points if they are stuck together – he likes to exclaim “tuck togehda!”) Daycare menu: sloppy joe sandwich, diced pears, diced carrots with fruit and ice cream for snacks.
MY LUNCHES
TUESDAY 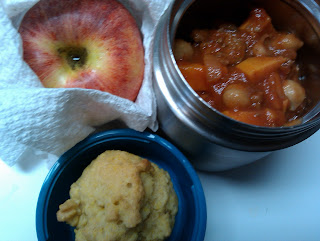 Leftover chili with cornbread
Chili and cornbread = a match made in heaven. Perfect for a winter day! I threw in a piece of fruit too.
WEDNESDAY 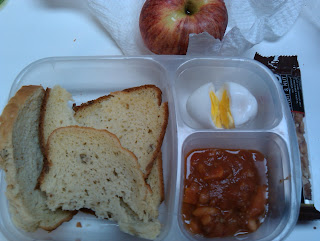 Bread (peanut butter at work), chili, egg, apple, KIND bar
The kid didn’t sleep well during the night and so we all overslept a little. I focused on trying to get my son’s lunch done right and let my own lunch slip. Part of the problem was that morning I was preparing breakfast, lunch, and dinner all at once. The evening bliss of coming home to a meal was wonderful, but the morning was truly nuts. I was running around like my hair was on fire, trying to make hard-boiled eggs (I opened this one to check doneness). I have a stash of peanut butter at work (it’s in a secure location and I don’t have any kids with peanut allergies) and I threw the bread in under the assumption I would make a sandwich on the fly. I survived lunchtime just fine — there is nothing wrong with simple peanut butter on bread.
THURSDAY 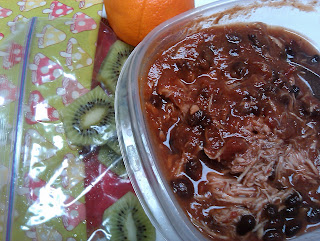 Chicken tacos, sliced kiwi, mandarin orange, bag of rice chips
I opened my lunch bag and thought, “I forgot silverware!” but really I didn’t need any as I used the chips to scoop. This was another lunch that caught the eye of my coworkers who said it smelled amazing. Thanks to Stephanie O’Dea and her inspired crockpot cookbook!
FRIDAY 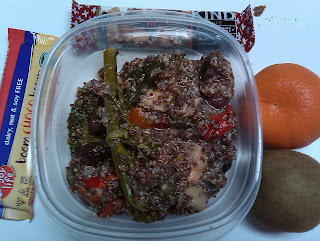 I used the crockpot again and made a variation on Stephanie O’Dea’s Mediterranean Chicken. Basically, I put a package of frozen chicken breasts in the crockpot, then I added a whole container of chicken broth, dry quinoa (around a cup)…and the rest was just old veggies in the fridge. Half a jar of Kalamata olives, half a jar of piquillo red peppers, three semi-mealy Roma tomatoes, broccolini – all had been sitting around in the fridge.

It sounds odd, but old vegetables make great soups so I took a chance. Everything turned out beautifully for dinner. My husband and I really enjoyed it, but my son was not that crazy about it. He’s not into quinoa, but he ate the chicken, a bite of broccolini, and tons of olives. He must have eaten ten! I didn’t send it with him for lunch because I knew he wasn’t crazy about it, but I ate it for lunch and it was terrific.

When I told my husband that I was packing a chocolate bar in my lunch, he replied, “You deserve it! Actually you deserve two!” It was a rough week for sleep.