My son had a cold all last week (translation: does not eat well when he’s stuffed up — who can blame him?) and then this week he threw up on Monday night and stopped eating very much. My husband and I haven’t been able to pin it down to anything in particular that caused his episode, but needless to say, his bad eating from having a cold changed to practically no eating…
Thankfully, he started eating a little better yesterday and ate really great today, which we hope is the end of roughly two weeks of us ripping our hair out. Hats off to all of you moms and dads who deal with this every day…
Click below for the photos…
MY SON’S LUNCHES
(gluten-free/dairy-free)
MONDAY 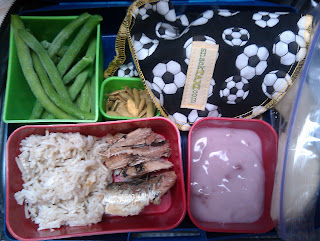 Basmati rice, sardines, green beans, pepitas,
strawberry coconut milk yogurt, crackers, and sliced pears
I asked my son what he ate for lunch and he told me, “beans.” He didn’t eat the rice or fish. The other stuff he ate during snack. I’m missing my sardine lover! The daycare menu was meat and cheese lasagna, pineapple bits, green beans with fruit and ice cream as snacks.
TUESDAY 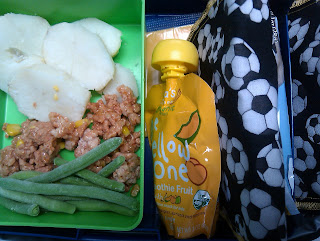 Ground chicken taco meat (with corn and tomato paste), sliced baked potatoes,
green beans, Ella’s smoothie packet, crackers and cheese, bar
He was ill on Monday night, we all overslept since we were up in the night – this was a throw-it-together meal. Again he just ate the beans and then the rest of the “snacky” food. Daycare menu: ground beef, mashed potatoes, orange wedges, diced carrots with yogurt and bread with soynut butter as a snacks.
WEDNESDAY 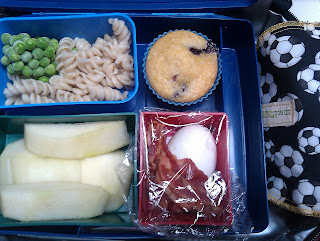 All he ate was the bacon. He even left the muffin, which I had made specifically because I knew the other kids were getting super junky blueberry muffins from a package. For snack he ate the crackers. When I picked him up, he was very fragile. Not a shocker since he didn’t eat! Daycare menu was tuna with whole wheat pasts, diced pears, peas with fruit and blueberry muffins as snacks. 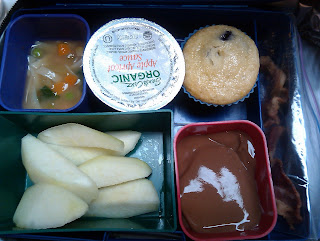 I gave him more bacon since that’s obviously a favorite. I’m told he didn’t touch the soup, but ate the bacon, yogurt and applesauce. He didn’t eat the muffin, but maybe had a slice of pear. Waaahhh, I want my soup lover back. Daycare menu was: cheese ravioli, strawberry yogurt, diced peaches, green beans with fruit and ice cream as snacks 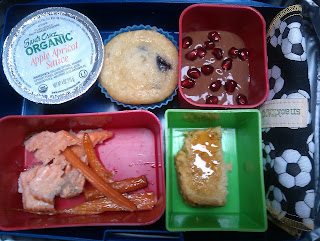 That’s the same muffin by the way. They sent it back so I left it there. Thankfully they told me he ate a little of everything. Who knows if we’re out of the woods though. Daycare menu: chicken nuggets, mac & cheese, applesauce, diced carrots with yogurt and pretzels with cream cheese as snacks. 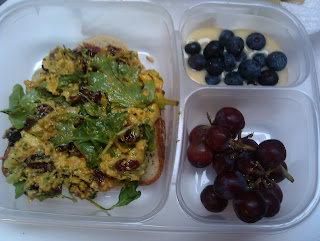 I didn’t make this chicken salad myself — we went out last weekend and I bought it at a gluten free restaurant. I had a ton leftover. It was amazing. 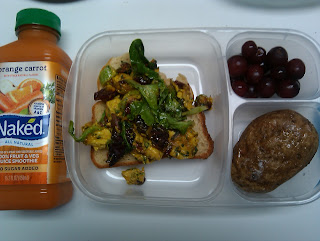 I made the most divine baked potatoes with just olive oil and sea salt baked for an hour at 350. They were amazing for dinner, though not as delectable the next day but not terrible at all. I was in a hurry since we overslept. 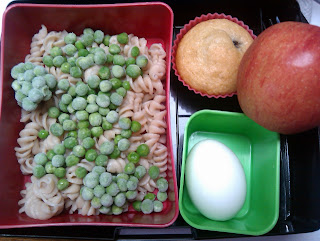 There’s something simple and lovely about peas and pasta. I actually could have added more peas. 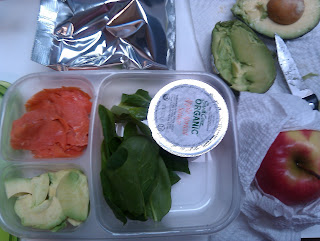 I got out the salmon and put it in my lunch (having already made my son’s packed lunch). He saw the salmon and asked for some. Assuming he’d just eat one bite, I gave him a small piece. He ended up eating the rest of the package. So that was a good thing, but I didn’t have any left to put in his lunch… 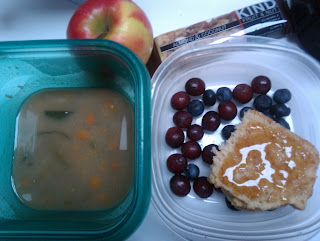 Crappy hurry up lentil soup, grapes and blueberries, cornbread with honey
apple, KIND bar
﻿
Friday was one of those days where I wish I could eat school lunch. We were in such a rush. I just had to throw together a crappy thin brown lentil soup from a can (I say crappy because I know it looks bad, but it actually tasted fine). I did find the time to squeeze honey all over my cornbread so by the time I ate my lunch, it had thoroughly sunk in and was delicious.