It was a weird week. For two days the three of us were stuck inside with the dog because of the snow. But I was thrilled to be cocooned in the house, nice and safe.

All week long my son was sick with a cold and by Friday he had spread his germs to me. You know that feeling when you are getting sick and with every passing hour you get worse? That was me on Friday — at work no less. I’m feeling better now after getting a ton of sleep overnight.

When my son gets sick, he stops eating well…I’ll tell my tale of woe below…

I organized our lunches by day since we ate some meals together! (for new readers, it’s all gluten-free/dairy-free because of our tummies) 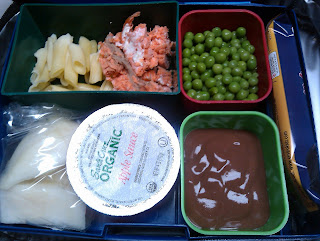 His caregivers told me that he didn’t eat everything. I know that when we made the salmon on Sunday night, he couldn’t stop eating it. Oh well. The daycare menu was ground beef, hash browns, diced pears, diced carrots with fruit and cheese and crackers for snacks. I don’t object to those foods, but since I have seen them I know that the hash browns are not fresh, but oval-shaped and the fruit and veggies come from cans lined with BPA. 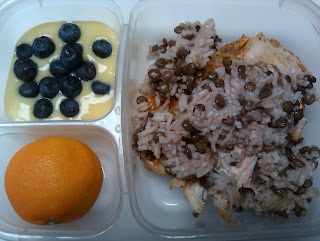 Leftover chicken in a onion/tomato sauce (from my mom & her Silver Palate cookbook) with rice and lentils, passionfruit/mango yogurt with blueberries and an orange.
How lucky am I that my mom comes to visit with a meal every now and then over the weekend? One of you suggested that I look at the menu to see what my students are eating to contrast the meals. I can’t do that. I avoid passing glances at the cafeteria food. I ate it 162 times and towards the end it felt like school food prison. I can’t look at even look at it now 🙂
MY SON – TUESDAY 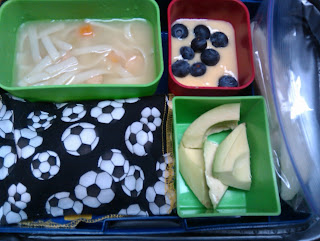 Chicken noodle soup, passionfruit/mango yogurt with blueberries, sliced avocado, snackTAXI with crackers (rice vegan cheese not picture), sliced apples to the far right.
I sent soup with him because he was sick and he normally loves pasta soup. They have a microwave at daycare. Again they said he didn’t eat much. Boo. The other kids at daycare ate cod nuggets, mac and cheese, applesauce, peas with fruit and ice cream as snacks.
ME – TUESDAY 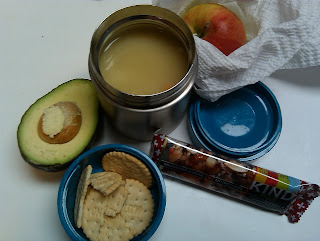 Half a can of chicken noodle soup (“gf” brand), half an avocado,
crackers, apple and a KIND bar

I poured my soup into a microwaveable container at work (The “fuel” container is not microwaveable). I bet it would hold the warmth inside for a few hours, but I don’t have time in the morning to heat up my soup before I leave for work. Little known fact — keep the pit in the avocado because it slows its browning! At work, I just dug out the avocado with my spoon. 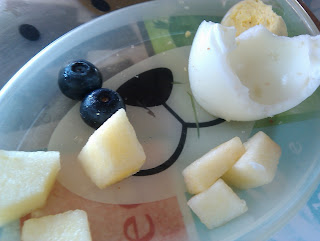 Bacon (not pictured), hard-boiled eggs, fruit salad (blueberries, apples, pomegranates)
My son was sick and so he didn’t eat much again. He ate a lot of bacon, but declared that he didn’t like yolk, only wanting the white part. Then he refused to eat his apples or blueberries, just pomegranate seeds.
ME – WEDNESDAY (snow day #1) 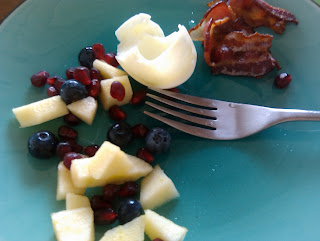 Fruit salad, hard boiled eggs, bacon
After he declared he didn’t like his yolks, I ate mine and left the egg white out — just in case he wanted it. Do you do that too? I stop eating parts of my meal when I think he might be interested in eating some later on. He also ended up with most of my pomegranate seeds!
MY SON – THURSDAY (snow day #2) 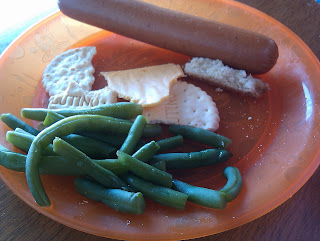 Chicken hot dogs (brand pictured below), cheese and crackers, bread with honey on it (not pictured), green beans.
I made chicken hot dogs. My husband told me, “You know, he won’t eat those. He doesn’t like hot dogs. I don’t know why you bought them.” And our son didn’t even take one bite. His lunch consisted of a little bit of cheese and a few crackers with a piece of bread with honey on it. 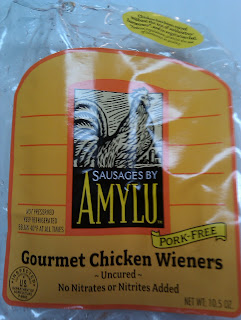 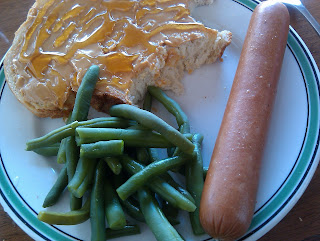 So I ate a hot dog, peanut butter/honey bread, and green beans for lunch. I used my bread machine to make the bread (Bob’s Red Mill gf/df brand)
MY SON – FRIDAY 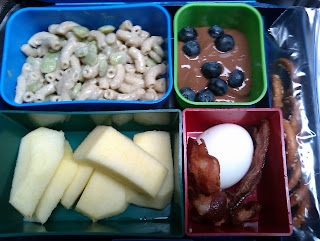 Again he didn’t eat very well, but it sounded like he did better than he did at home. Even though he’s eating different food than his friends, he has always eaten better there than at home regardless of illness. Never underestimate the power of peer pressure. His friends at daycare ate ground beef with pasta and tomato sauce, diced pears, peas, with snacks of fruit and ice cream. 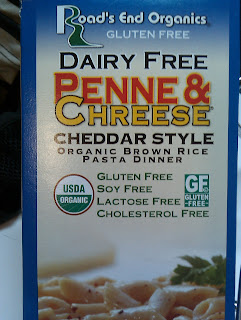 Here’s what we like — it doesn’t take like mac and cheese.
It’s different, but I find it pleasant.
ME – FRIDAY 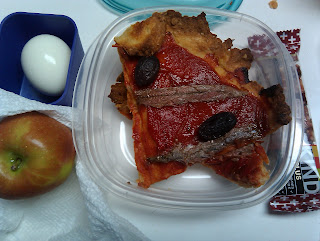 ﻿Homemade pizza with kalamata olives, anchovies,
roasted piquillo peppers (from a jar), egg, apple, and a KIND bar
I made pizza on Thursday night. My husband said it was good, but he missed the cheese… We’re big into anchovies on pizza ’round here. My husband and I discovered this when we traveled to visit some of my relatives who live very, very far away. They put anchovies on their pizza. To get rid of the overly saltiness the fish, soak them in a little milk before putting them on the pizza. I did that for a long time, but I stopped when I realized that I liked them salty. My son was not terribly excited by the pizza, only eating the crust, so I didn’t send some in his lunch.