I’m living in a space right now that will cease to exist. Two different realities at once.

It’s like being being newly pregnant when you don’t tell anyone until you deem it “safe.” For some, that’s as soon as they find out. When I was pregnant with my son, I waited to tell most people until I was halfway through.

But with every secret comes intense feelings. Joy and fear with a pregnancy. Most days I feel a lot of turmoil regarding my life as Mrs Q.

Having a secret identity is not glamorous. It’s hugely stressful.

So when I went to Blissdom and heard Dr. Brene Brown speech about shame, it resonated with me. I found her blog Ordinary Courage a few months ago, but right away I could tell she was the kind of person I’d like. When it was announced late that she was speaking, I knew it would be powerful.

Why would a speaker address a bunch of bloggers about shame? Because she defines shame as the fear of disconnection. Isn’t that what most bloggers fear? According to Dr. Brown, shame is about feeling “not good enough” and “not worthy of connection.”

Many “in real life” people will find out about this blog later this year. I like to think that most will have positive reactions, but some might feel betrayed by this rather large thing I did…without breathing a word to anyone. I really hope that they will be able to keep in mind why I ate the lunches and blogged them: for the kids.

Anyway, Dr. Brown launched a new movement in blogging while she was at Blissdom. It’s called Free-Range Social Media: 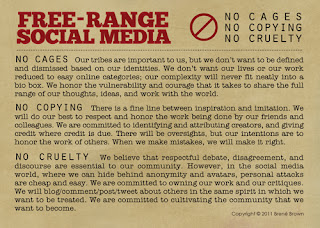 I love this. Dr. Brown is advocating “No cages, no copying, no cruelty.” Cages refer to bloggers restricting themselves and not allowing their own natural growth through exploration of lots of topics because of fearing loss of readers. “No copying” is self-explanatory (that’s a message to the TWO fake Fed Up With Lunch facebook groups!!) and so is “no cruelty.” I really love the discussions we have on this blog — it’s a political blog that’s for sure so keep all your interesting comments coming! 🙂

Dr. Brown encouraged sharing of these rules. I think they are worth spreading. If you want to get a taste of her talk at Blissdom, you can watch her TEDxHouston talk below: (My own blissdom recap post to come next week…I’m slow, I know)