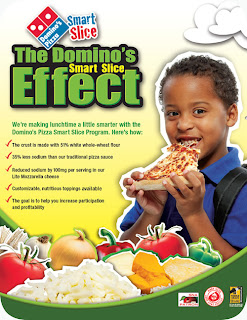 Domino’s has launched their new “Smart Slice,” which is a “reformulated” pizza recipe to fit the new USDA’s regulations for school lunch. It’s “51% white whole-wheat flour” and the pizza has “35% less sodium in the traditional sauce.” Where’s my party hat?

The story broke in January and many of you sent me links, which always failed to open on my computer. Weird…like they knew it was me. Anyway, the links magically work now. The official press release: A revolution in school pizza!

Delivery pizzas made by companies like Domino’s, Pizza Hut, Papa John’s are special treats. Delivered pizza should be a once-in-a-while thing. Like on Super Bowl Sunday. Did you know that pizza delivery companies across the country expected to see a 35% rise in sales Super Bowl Sunday (source)? The NFL’s official pizza provider, Papa John’s, expected to sell a million pizzas last Sunday, which would make it their biggest day of the year (source).

I just felt a little queasy.

Moving on, I wasn’t a big fan of the school pizza I ate. But I do like pizza. As a kid I would go out to Pizza Hut with my family for deep dish on special occasions. I loved that crust. And the garlic breadsticks, but my parents didn’t always allow us to get those.

My point is that with pizza being served at least a once a week thing at elementary school, and at many high schools it is offered every day, we have to use caution when letting these mega-corporations come in and give our kids these products on a regular basis.

How many of the home cooks who read this blog know how easy and cheap it is to make homemade pizza? That’s probably why my family didn’t go out to Pizza Hut very often — actually probably only when my sister and I were participating in Book It! and we got pizza coupons for reading (don’t get me started…). My mom made terrific homemade pizza and she would pair it with a salad of lettuce, green pepper and tomatoes. Simple and delicious.

If you haven’t made homemade pizza, I say go for it. It’s customizable, it’s so cheap, and of course your pizza wouldn’t contain a paragraph of ingredients because it’s not processed and you decide what you want. I find home cooking to be quite addicting. Once you try making your own pizza, it’s going to be a lot harder paying 20 bucks for one — though delivery is pretty convenient.

How much money will Domino’s get per slice? $2? $1? It’s dough, sauce and cheese, folks. It shouldn’t be expensive and no one should be making a buck off of feeding poor kids at school.

Let’s summarize: I’m marginally happy about the reduced sodium, but overall I think there are better ways to feed kids at school that don’t rely on pizza delivery companies.

Further reading:
Domino’s: A revolution in school pizza!
Slashfood: Domino’s “Smart Slice” To Appear in A School Near You
Serious Eats: Domino’s Moving into Schools with ‘Smart Slice’