Since the end of blogging my school lunches, content here has been a bit of hodge-podge. I’ve blogged a bit about everything (lunches, food, ads, personal stuff, book club, etc).
I’ve been thinking that maybe I should start another blog, a personal one. I’ve been developing it on the side. Many of you are here for the school lunch information. Considering recent developments, it seems to make sense to keep this blog aligned with my original purpose. I can put some of my other crazy ideas on a different blog. But I would mention it here in a one liner — “today I blogged about this over there, click on the link if you want to read about it.”
I’m curious and would love your opinion so I put together this survey. Please click here to take survey and answer just six questions. Thanks!
Without further delay, here are last week’s lunches (as usual they are gluten free and dairy free because of both of our tummy issues):
MY SON’S LUNCHES
MONDAY 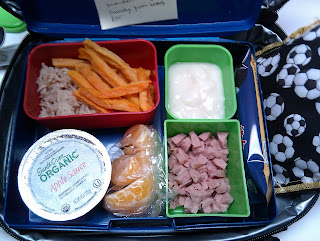 The daycare menu on the same day was cheese ravioli, bread, diced pears, green beans with snacks of fruit and ice cream. I have confirmed that the daycare serves all the kids ice cream as a snack when it’s listed on the menu. I didn’t want to believe that was true. Actually, I just confirmed that today while on a playdate with my son’s three closest daycare pals and their moms. They are not happy about it. We’ve all made a recent transition to a “big boy room” and the changes have been hard to get used to…for everyone. (Only one of the moms knows about the blog, the two others know I have an exciting “side project.” I bring people into my inner circle by wading in with them first. I can’t just drop a bomb on them. It takes weeks to bring people up to speed and sometimes it’s still hard to process everything that happened last year. You and me both!)

Anyway, one of the moms is going to write a letter about how she feels about the menu (this is one of the moms who doesn’t know about my online identity). I encouraged her even though I’m not sure she’s going to get much traction. I know that I was told that I needed to provide food for my child if I wanted him to eat something different than the menu. Additionally, I ended up having to provide an official doctor’s note to opt out of the daycare food. Ah huh. His own mother couldn’t pack a lunch and snacks without doctor’s approval.

Anyway my husband made jasmine rice again. It was great. Some of you asked for a recipe. He photocopied it from the library and I can’t figure out which book it came from. I want to give credit where credit is due. It’s called “Caju Pullao,” but I can’t find an online listing for a recipe with that name. Anyway, it was good.

My husband bought sweet potato fries in a bag at the store. In and of itself, not a bad purchase, but now that I can make these at home myself, it’s not a convenience item we need to purchase. They were fine.

I pushed the limits of the daycare rules by sending my son with chicken sausage. I was told no sausage due to fears over choking. I never knew how serious that was until an ER doctor commented on the blog about seeing kids choking at the ER on graps. The daycare menu often offers “diced ham,” so I thought if I chopped up the chicken sausage into little cubes maybe, just maybe, I could get away with sending that. No one said anything so I think I was ok. Phew! He didn’t eat much of the sausage though. 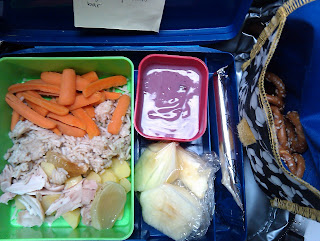 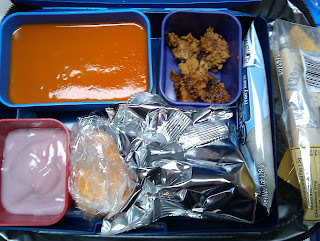 Tomato soup, baked lamb (take two), yogurt, mandarin orange slices, “rice vegan” cheese,
silver bag with crackers, snack bar, and the rest of the crunchy green beans.
My husband made that baked lamb dish again with onions and a yogurt sauce and this time he didn’t burn it. I know it looks like poo in the photo, but it turned out to be fantastic. I’ll have to see if he can find the cookbook where he got all of these recipes. The prep was outrageous, working late the night before to prep the meat. But I know it was worth it. He told me that getting it right was a huge confidence boost.
Daycare menu was American cheese sandwich, tomato soup, mandarin oranges, peas with fruit to drink and cheese and crackers. The mom that is really pissed about the ice cream is also mad that her kid got processed cheese twice in the same day. No joke, right?
THURSDAY 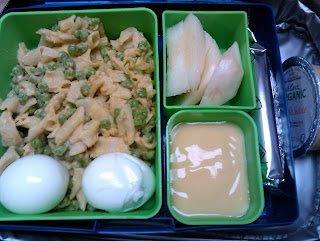 Hello monochrome, yellow meal. At least it didn’t taste boring as these are favorite foods of my son. Daycare menu was diced ham, mashed potatoes, appleasauce, green beans with snacks of fruit and ice cream.
FRIDAY 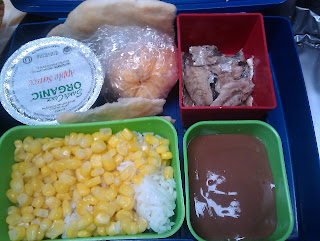 applesauce, mandarin oranges, pita bread, sardines (!), corn and plain rice, chocolate yogurt
(I ended up putting the bread in a snackTAXI)
I’ve been eating more salmon and sardines because I’m trying to get my Vitamin D levels to go up. My son saw me eating sardines in the kitchen and demanded some. I offered sardines to him a long time ago and he refused them. But when it appeared like Mommy was hiding a food from him, well then he had to have some. So I sat down with him, I showed him how to take the bones out (fascinating for a two-year-old), and he  gobbled down 1.5 sardines. Ever since then whenever I’ve asked him if he wants to eat sardines with Mommy he says, “cited!!!” (excited) while smiling and waving his hands around. So I sent sardines in his lunch. I bet his childcare providers were shocked!
The daycare menu was ground beef with pasta in a cheese sauce, bread, diced pears, diced carrots with snacks of yogurt and fruit. Lots of beef, lots of wheat, lots of milk…repeat…
I’m going to write a letter to the daycare and ask them to survey parents about their food preferences. I’ve been taking my son there for 18 months and I’ve never completed any kind of survey.
MY LUNCHES
MONDAY 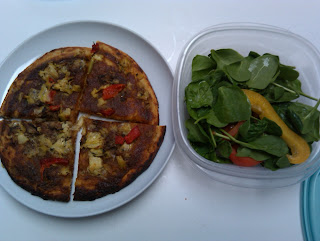 Amy’s pizza, salad. Not pictured: six cookies and my husband

Notice my son got a packed lunch on Monday, but I had a home lunch? Yep. He went to daycare while I stayed home for MLK Jr Day. Even better? My husband had Monday off too, which came as a surprise to both of us. Monday was a very nice day indeed. I loved eating lunch with my husband and without our son. It’s a rare treat, but wonderful to have adult conversation. Of course our conversation is all about our boy, but still. 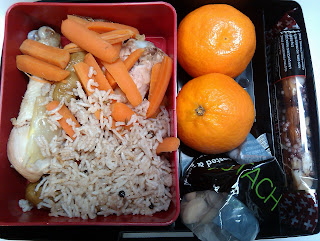 I like baking more than I like frying. Roasting and baking in the oven is just more tasty. On Friday night, we did salmon with just olive oil and salt. Amazing. 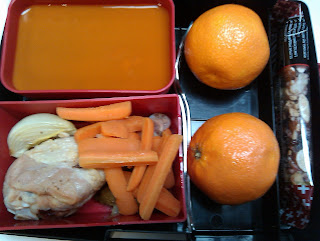 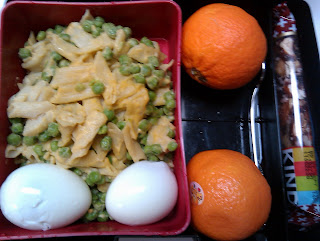 “mac and cheeze” with hard boiled eggs, mandarin oranges, bar
That pasta is really good. Love me some eggs too.
FRIDAY 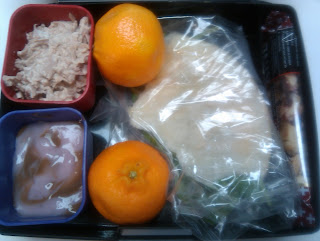 tuna salad in a container, pita in a bag with spinach leaves, mixed up yogurt, oranges, bar
When I open up a yogurt for my son and pour it into a container, there’s some left over, which is often not enough for me to save for my own lunch. So I just scarf it down for breakfast. There was enough of the chocolate yogurt left so I dumped it into a container and swirled in some raspberry — terrific combo. I spooned the tuna into the pita and we were off and running!

So there you go!