I found out what was wrong with me: I’m deficient in Vitamin D. The lab results came back and my levels are below 20. My doctor told me to start taking 1,000 mg per day. I guess Vitamin D deficiencies are common among people living in the cold. Of course, I don’t eat dairy products too, but I do eat fish and eggs frequently. Now that I know, I can take steps to make it better!
Many of you mentioned enjoying the shots I took of my son’s lunches during the Eat Along Challenge in December and indicated you wanted to continue seeing what he was eating. Well, here you go. It wasn’t exactly a “banner” week for lunches…I wasn’t able to scratch cook as much as I would have liked and mimicking the offerings at daycare is constraining as well…
MY SON’S LUNCHES
(I give them a B- this week.)
MONDAY 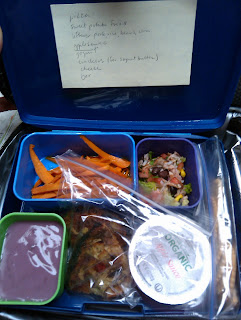 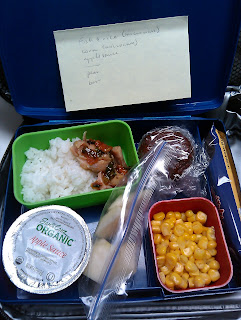 Top row: Rice and red snapper cooked in gf soy sauce,
bakery-bought gf/df muffin;
Bottom row: applesauce, sliced, skinless pears, corn, snack bar
The daycare menu was “Diced ham, rice, orange wedges, green beans, with snacks of fruit and a blueberry muffin.” I send leftovers a lot, but I planned the previous night’s dinner knowing I needed to have rice in his lunch. My kid loves fish. This was a popular lunch with him. The blueberry muffins the daycare offers are mini-spunkmeyer-like ones with no real nutritional value. I will start gf baking, at some point, but I haven’t had the time. In anticipation of muffins on the menu, I bought a few gf/df muffins from a local gf bakery and I froze them. I defrost one overnight and then send it along so that when they offer the other kids muffins, he can have one too. I’m really happy I did that because a little girl had a birthday and I’m sure that he was excluded from any food treat. They didn’t tell me in advance or I could have made sure he had something to eat in celebration…  🙁
WEDNESDAY 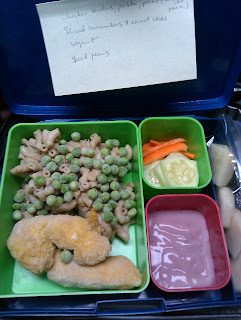 Main: Ian’s gf/cf chicken nuggets, gf/df mac and cheese, peas;
Sides: blueberry coconut milk yogurt, sliced cucumbers and carrots, sliced pear, snack bar
You guys know how I feel about nuggets!! But when I have a two year old and I have to compete with the daycare menu they offer, well, I have to play the game. I know that making my own from scratch would be ideal. There’s no excuse; I just need to meal plan better anddo it according to the daycare menu. I keep a box of Ian’s in the freezer for occasions like this. He wasn’t crazy about this lunch and only ate half of it. The daycare menu was “Chicken nuggets, mashed potatoes, diced peaches, diced carrots, with snacks of fruit and ice cream.” Whenever I read that a snack is “ice cream,” I just have to laugh. Stupidly, I haven’t asked if they are really giving the kids ice cream!? I feel like it’s some kind of joke when I read it.
THURSDAY 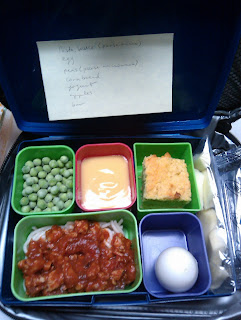 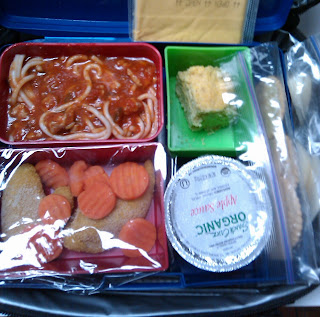 …and he had to have gf/cf nuggets again!!
Top row: rice cheese, pasta and sauce (repeat), cornbread (repeat);
Bottom row: nuggets (boo), carrots, applesauce, crackers, and snack bar
Yesterday, the night before this meal, I made chicken tostadas with ground chicken and refried beans. At the last moment, I decided to drizzle some never-before-opened red pepper oil on top for flavor. I drizzled it on and then read the label, while putting a drop of it to my lips. The last ingredient said “flavor” and when I read it, I realized the oil was insanely spicy, too. I was kicking myself when I saw that and did my best to dilute it in the pan. He didn’t eat much, but I ate my dinner with my fingers crossed. Wouldn’t you know it, I woke up with a terrible tummyache AND my son had the biggest tantrum he has had for months about not wanting to put on a piece of clothing. So I don’t know what was in that stuff, but I couldn’t pack it in his lunch or even eat it for mine.
So I went with the leftover pasta that had been a hit before (even though I don’t like to repeat the main dish) and I had to get out the only convenience food we keep in the house (the blasted nuggets) and throw those in. I felt like a failure!!
Also notice the packaged cheese on the top. That is rice cheese. No, I’m not kidding. I would never buy this, but at daycare they give the kids American cheese slices. I know that he wants to eat the same things as they do (he’s only two so it’s not like he can be reasoned with), so when I can, I do try to give him similar stuff. The menu was “Whole grain pasta with meat sauce, mandarin oranges, green beans, with snacks of fruit and cheese and crackers.”
BONUS! 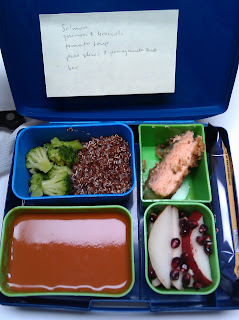 He went to daycare once last week (over break, when I had more time).
Top row: broccoli, quinoa, chili lemon salmon;
Bottom row: tomato soup, pears, pomegranate seeds, snack bar
Just to show that I can make beautiful lunches, when I have the time. He ate the fish and the soup. What did he leave behind? Half of the quinoa and broccoli. Not too bad.
MY LUNCHES
(I rate them B+)
MONDAY 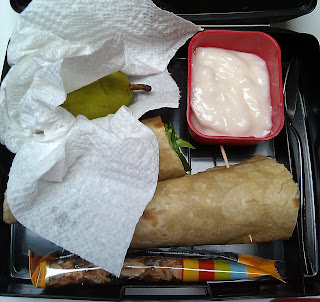 Wraps with turkey salami, coconut milk yogurt, pear, KIND bar for later
Everything is gf/cf for me. I read all the necessary labels to make sure.
TUESDAY 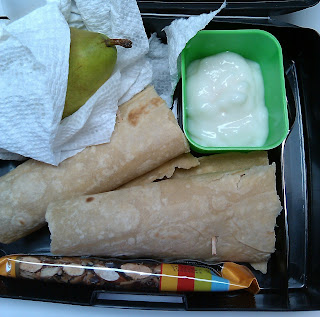 Repeat – I don’t need variety like my son.
WEDNESDAY 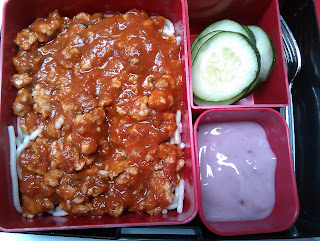 Rice pasta and sauce with chicken, cucumbers, yogurt, (snack bar not pictured)
I love pasta. It was one of my favorite school lunches too! The rice pasta isn’t terrible once you get used to it.
THURSDAY 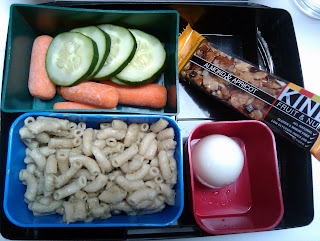 gf/df mac and cheese, cucumbers and carrots, egg, KIND bar for snack
The gf/df pasta is really great. We had some leftover so I ate it. It looks greenish because they use like a pesto-y powder. This lunch really wasn’t enough. I was hungry by 3pm.
FRIDAY 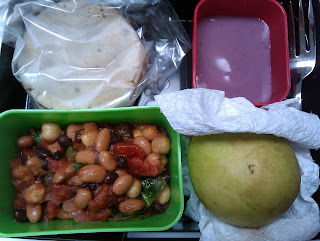 I made chili one night this week, but I didn’t send it with my son. He didn’t want to eat it, only picking out the chickpeas. I should mention that when you have a fat pear, you can’t close the laptop lunch box. So, I had to throw most of the pears into my purse, which was perfect for an afterschool snack. I wash the pear off and dry it with a paper towel, which makes a perfect napkin.

1) I don’t think everyone should go gluten-free or that school lunches should be gluten-free (although with small tweaks, many rice-based lunches could be). I had to make these dietary changes for my family. It’s not easy and you shouldn’t do it unless you think you might benefit. However, I do believe that many people live with sensitivities, allergies, and intolerances to many different foods that go untreated for years.

2) I’m going to start baking gluten-free so that it’s not costing me a fortune when I go shopping. So that should be interesting!

3) I have talked to my son’s daycare about the food and they told me if I want organic food, I need to bring it myself. So that’s what I’m doing. I’m trying to raise awareness about the quality of the food at daycare with other parents, but they tell me that they are struggling with picky eaters and are simple pleased that their children are eating anything at all. I haven’t met or seen any other parents who pack, but I’m going to keep my eyes open.