It’s been a long week. I’m really, really tired, but I have good news to share. Next week.

My son has gotten a cold. I think it was three weeks ago that he was sick last, but we were just thinking that it felt like a long time ago since his previous cold. He has transitioned to a new room at daycare and that has been hard on…Mommy and Daddy. He has done well with it, mostly because his very best friend moved at the same time. My son idolizes this other little boy and talks about him at home all the time.
And then he bites him at daycare.
Yep. I have a biter. He bit his favorite little friend twice. Once last month and then he bit him again this week.
We’ve talked about how we don’t bite our friends (he did bite a girl last fall) and, in the last room, they even read a book about “biting apples, not friends.” So he will say, “bite apples, not friends.” Try putting it into practice, kid!
I am mortified. Advice, please! I’ve emailed the boy’s mom to apologize. She said it’s ok, but will she still forgive if he keeps doing this?
MY SON’S LUNCHES
(everything is gf/df because of my son’s tummy issues)
MONDAY 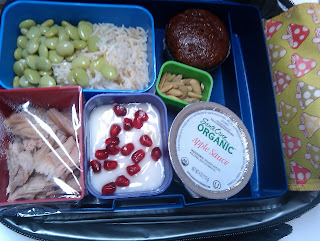 The daycare menu that day was fish nuggets, fettucine alfredo, diced pears, diced carrots with fruit and a blueberry muffin for snacks. My son’s new caregivers tell me that he eats his own lunch happily and doesn’t feel deprived. I’ve visited during lunch and, you know, it’s really hard for me to see my son eating something different than the other kids. I know that doesn’t make sense, but everyone else has exactly the same stuff, the stuff he used to eat before my epiphany, including fruit and veggies from cans…their food is on paper plates and he’s sitting with his own separate food. I don’t want him to feel different, but he’s bound to. That’s why I try to match when I can (like the muffin).

They told me he ate everything… 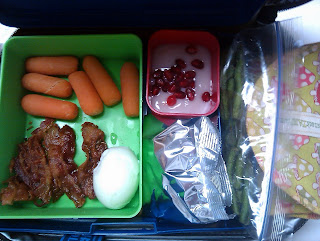 Eggs, bacon, steamed carrots, crackers (foil bag) and cheese (not visible) yogurt & pomegranates, crunchy green beans, apples cut up in the reusable bag. Daycare menu: chicken patty on whole wheat, pineapple bits, peas, snacks of fruit and ice cream.
We had two major kitchen failures on Monday night when we were making dinner. My husband prepared a baked lamb dish. The recipe said it needed to cook for two hours. That seemed long to me. We pulled it out of the oven about an hour into the cooking. I thought it looked ready to eat, but he wanted to follow the recipe. So it burnt black around the edges. I humored him and ate some. It would have been amazing…and it would have gone into our lunches.
I got out the old bread machine and tried my hand at making gluten free bread from a box meant for a machine. Everything went great and I pulled it out and cut it up. I enjoyed a piece or two. My husband then asked to see the label. That’s when we both noticed that although it was gluten free, it had “skim milk” and “whey” as ingredients. So not only could I not eat anymore, I couldn’t send it in my son’s lunch the next day. And of course I was sick the next morning.
So what you see above I threw together at 6:30 am.
WEDNESDAY 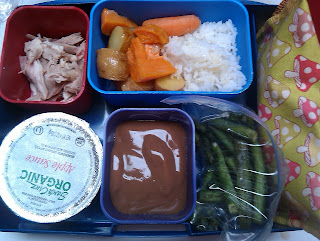 I roasted a half-chicken with veggies (sweet potatoes, potatoes, carrot, onions) in the oven for dinner the previous night. Delicious and easy! Then I sent along applesauce, chocolate yogurt, crunchy green beans, and mandarin orange wedges in the snack. Daycare menu was: ground beef, buttered whole wheat pasta, applesauce, green beans with yogurt and fruit for a snack.
My husband picked our son up from daycare so I didn’t get the scoop on how much he ate.
THURSDAY 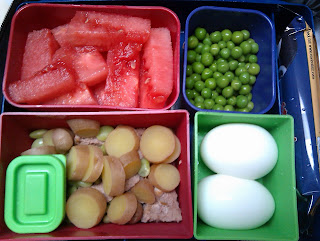 Cut up turkey burger with potatoes, lima beans (container with ketchup for dipping), eggs, watermelon, peas, bar. Daycare menu: scrambled eggs, hash browns (formed patties), apricot chucks, diced carrots with fruit and american cheese with crackers for snacks.
I bought the watermelon at Whole Foods. It’s obviously not in season here. It’s organic and came from Guatemala. I couldn’t resist buying it because my son is nuts about watermelon. Was that a bad thing (because of jet fuel costs)?
My little guy’s cold started up on Thursday so I knew 1) he wouldn’t eat much 2) he loves eggs. So I sent a lot of food and he didn’t eat much. End of story.
FRIDAY 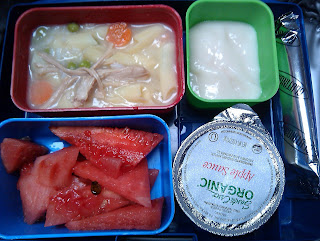 Turkey soup made with chicken stock (from a carton), corn pasta, rice carrots and peas, watermelon, yogurt, bar. Daycare menu: ground beef, macaroni and cheese, diced peaches, peas with fruit and ice cream as snacks.
We had soup for dinner the previous night because my son and my husband were feeling under the weather. My son didn’t eat well for dinner. And today they told me he didn’t eat much of the soup. Tonight we had a nice dinner, which he didn’t eat much of. We know that when he’s sick, he really stops eating. Once he feels like himself again, he’ll go on a bender. So I’m trying not to fret.
MY LUNCHES
(gf/df too)
MONDAY 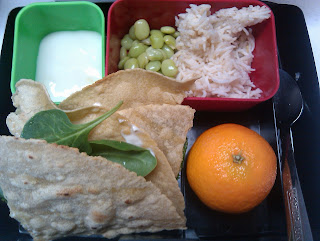 Wrap with turkey meat, lima beans & bake Jasmine rice (one of my husband’s creations), yogurt and Mandarin orange.
I figured out that if I put the tortilla in the toaster over for three minutes, it got really hard and crunchy and made a wonderful crunchy wrap. I couldn’t really fit everything in the bento box and still close it. So I took the sandwich out.
TUESDAY 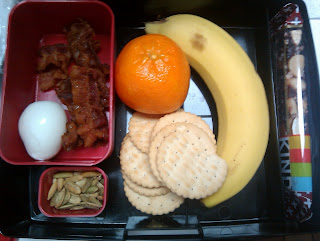 Egg, bacon, pepitas, crackers, banana mandarin orange, KIND bar
This was not enough food. I was ravenous at 3 pm. But it was the lunch after our kitchen disaster so I didn’t have a lot of options when I was rushing around like a mad thing in the morning. It should be noted that I did not need silverware with this meal.
THURSDAY 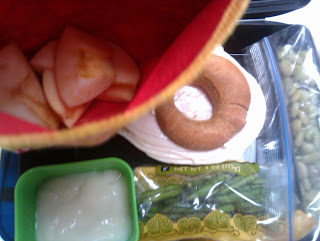 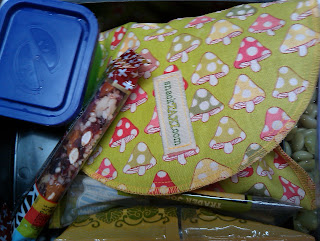 Closed
Cut up apples in the snackTAXI, bagel sandwich with turkey meat, lima beans in a bag, crunchy green beans, yogurt.
The turkey meat we buy is the nitrate free and uber-healthy stuff, which advises “eat within four days of opening.” Don’t push that. I made that mistake last year. It was the fourth day so I piled on the turkey meat. I had trouble closing it, but I don’t care that it’s slightly ajar because it’s inside something else.
THURSDAY 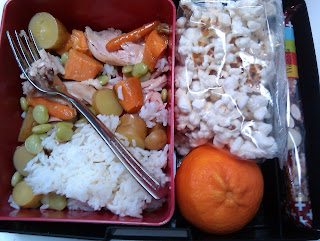 Roasted half-chicken with veggies, popcorn popped on the stove with walnut oil, mandarin orange, KIND bar
I’m obsessed with popcorn. Making it on the stove is so fast and easy. It’s addictive. I couldn’t find the snackTAXI or I would have used it for the popcorn. I had tossed it into the laundry!
FRIDAY 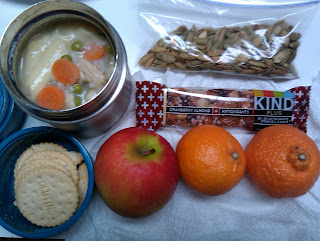 The turkey soup I made, with crackers, pepitas, oranges, and an apple.
I really wanted soup today to try to ward off the cold that’s infecting my house. Last night I slept so poorly that I think that might do me in. I tipped the soup into a large cappuccino cup and microwaved it at work. The container I used is called Fuel and I blogged about it when I bought it last summer. After all this time fantasizing about packing my own lunch, here I am doing it.
***

Regarding the snackTAXI — there seems to be some confusion over the interior material because I’m not a fabric expert. It’s waterproof. You can run your fingernail over it and it will make a zipping noise. What kind of fabric is that?

Today at work there was a small picture of a grandma in some materials.