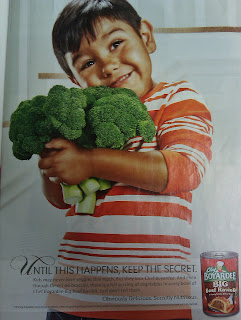 Working Mother, August/September 2010
Until this happens, keep the secret.
Kids may never love veggies this much. But they love Chef Boyardee. And
even though there’s no broccoli, there is a full serving of vegetables in every bowl of
Chef Boyardee Big Beef Ravioli. Just don’t tell them. 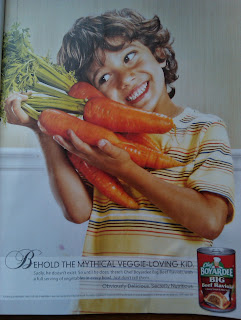 Disney Family Fun, November 2010
Behold the mythical veggie-loving kid.
Sadly, he doesn’t exist. So until he does, there’s Chef Boyardee Big Beef Ravioli,
with a full serving of vegetables in every bowl. Just don’t tell them.
Obviously delicious. Secretly nutritious.
Those are some cute kids with some massive veggies! Any kid who can’t read will see these and not notice the can of Chef Boyardee. All they will think is, “Hey, if he hugs his broccoli and the other boy likes his carrots, maybe I should try some.” This is exactly the type of veggie advertising we need, minus the Chef Boyardee stuff.
It’s funny to see ads with the product minimized at the bottom. The can doesn’t do much for me and I’m betting most moms aren’t rushing out to buy canned stuff for their kids. Linking it with wholesome veggies is clever. I didn’t eat spaghetti-o’s as a kid, but my mom did try to sneak veggies into foods. She made zucchini bread even though my sister hated zucchini. So my mom called it “Z bread.” It’s all in the branding, right? Inevitably someone slipped up and said “zucchini bread.” My mom tells us that my sister recoiled in horror from the bread, mid-bite. Disgusting zucchinis…that I was enjoying until you said the “z” word…
I think the choices of “broccoli” and “carrots” in the ad are a bit off. Sure, many kids don’t like broccoli, but carrots? Carrots seem pretty popular with kids. I’m sure that the Harvard MBAs who wrote and designed this ad researched which veggies they needed to feature. If the kid was hugging kale, now that would be surprising.
What veggies does my son hate? Well, cooked kale and raw spinach. But overall I find that it varies by the day. Sometimes he’ll eat a few cubes of potatoes, other times he won’t, and then another day he’s eating them again. He went through an I-love-broccoli-must-eat-it-every-day phase, but now that love affair is cooling. I have to be careful not to over-offer. For example, one Sunday he ate a massive breakfast (a whole cup of yogurt, half a waffle with syrup and probiotic juice) and just two hours later a semi-large snack of half of Mommy’s KIND bar. Then at lunch he barely ate anything, but had fun playing with teeny-teeny sandwiches. I tried not to stress about it and not push food on him. His eating depends on how much he ate at a previous meal or snack, how he is feeling and if he is teething. (Before having my son, no one warned me about “teething.” Well, that sort-of blindsided me!) I find what he refuses to eat is usually not about the food, but all about his attitude!
One time my husband was clearing the table after dinner and casually took my son’s plate away, saying “I’m going to feed the rest of this to the dog.” My son screamed, “Nooo!” and grabbed the plate back to eat the last two bites. We were stunned by this and once we recovered, my husband decided this was a great way to get my son to finish, or at least eat a bit more of, his dinner. So at dinner when we think that he could benefit from a couple extra bites (this happens maybe twice a week) and we’re cleaning up, we tell our son that his food is going to the dog. He freaks out and eats a bit more! It’s probably not what the experts would recommend, but it’s a useful little trick!