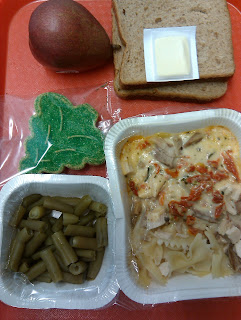 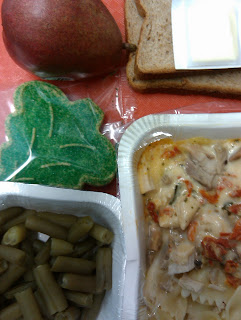 That was actually really good. Tasty even. A new menu item, well, that’s pretty rare. I wonder why they decided to debut it so late in the year — bring it back next year, it was good.

The pear was an amazing color. Would a pear aficionado happen to know what kind of pear that is? It was delicious. The beans were “eh,” but I was distracted by the pasta. I kept staring at it… 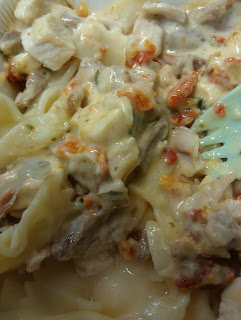 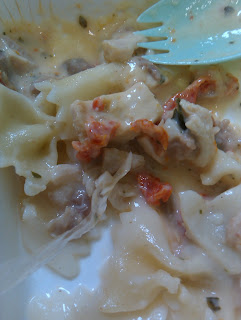 Sun-dried tomatoes? Am I dreaming?

My taste buds, now a jaded, suspicious bunch, told me they were indeed “sun-dried.” I don’t know if that was perception or reality. I tend to believe them, mostly because I don’t have any other data points. 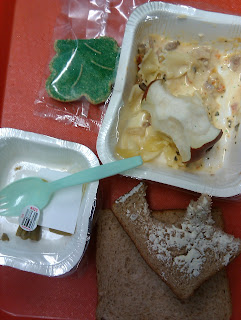 The cookie was not good. It was pure sugar with funny tasting green stuff. Some say that synthetic food dyes have a taste. All I can say was that it was an odd bite of overly sweet stuff. But like I said before, my taste buds don’t know which end is up. The kids loved the green cookies. But the other green item (the green beans)? Not so much.

I’m eating gluten-free, dairy-free at home outside of school lunch. It sounds restrictive, but it’s mostly a whole food diet. With my husband on an Indian food kick, we are eating really well. My husband, who was only able to boil water and fry an egg, decided within the past month and a half that he wanted to learn how to cook his favorite cuisine: Indian. Last night we had Daal that was terrific. Going from Daal made with cardamon pods, cinnamon sticks, and turmeric one day to a fluorescent green cookie the next is dietary whiplash!

Hello to everyone who came to visit via the beautiful article written by Rebecca Dube that was featured on todayshow.com and then got picked up on msn.com‘s home page. I’m feeling shy again. Anyway, I had a really fantastic conversation with Rebecca about the blog one night this past week. It was like chatting with a friend; I was actually lying on my dog-chewed couch just like I do when I call up my sister. Rebecca wrote such a nice article. Go ahead and check it out.

Lastly, I made something for you. I video-blogged my lunch today. I don’t say anything in this silly, short video but at least I waved!

You can see how wimpy the spork is!