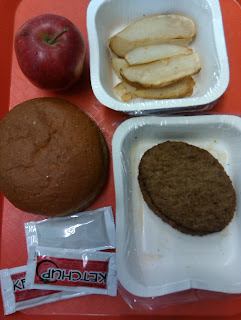 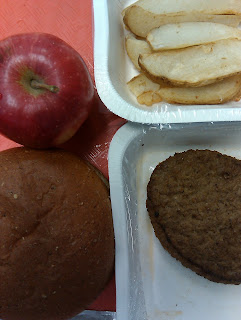 When the plastic came off over the burger compartment, there was this aroma. It was the smell of processed meat. I turned away and told myself, “Just a few more days.” To choke it down, I had to use a lot of ketchup packets on the burger. Thankfully it tasted better than it smelled. 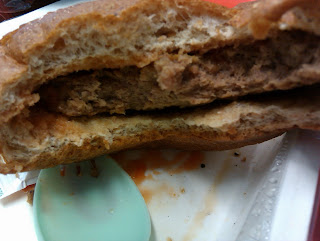 I was excited to see potato wedges again (one of the new offerings this fall), but overall the potatoes were bland. I tried to eat them without ketchup but they were too dry.

I know someone who is from Poland. She is younger than me, but moved here as a young adult. One time we were talking food and she told me that she couldn’t eat American potatoes for two years after coming here. Her mother kept a vegetable garden in Poland and her mother’s potatoes tasted far superior to anything she could find in American supermarkets. She says that now that she has adjusted she can eat American potatoes just fine. Man, I’d really love to try a Polish potato! 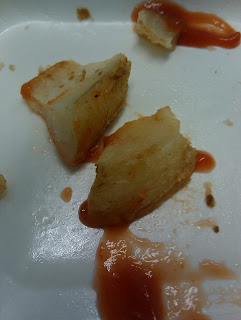 I feel like I’m breaking out of prison on Friday. Having to eat school lunch has almost been harder psychologically than physically though it has been tough in every way. I’ve blogged about how weird it is to have no control over what I eat for lunch and how that has done a number on me. Also lunch time has been stressful every school day 2010. The secrecy has been challenging, the worrying about being discovered. I just want to have a normal lunch break again! 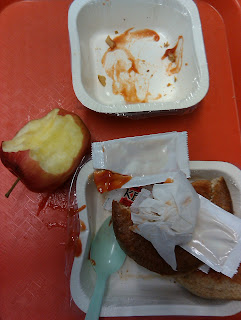 Ketchup got everywhere
What’s the magic number? It looks like it will be 162 total school lunches eaten in 2010. It won’t be the length of the typical school year in the United States: 180 days. My district offers 170 days of instruction per school year, which would be days that school lunch is served. I worked other days that there were no students and of course no school lunch (professional development and report card days).
I ate school lunch every day that it was served and that I was in the school building. It doesn’t add up to 170 days because I took some days off. The first half of the project, from January to June, I took five days off. Those included both when my son had surgery (ear tubes) and then later my mother had some minor surgery (I didn’t blog about any of that at the time). The other days were due to my own illness or that of my son. This fall I only took off three instructional days, which were days that I was giving speeches about the project. That I haven’t had to take time off for illness is kind of remarkable.
My son has been less sick this fall, but this week he has been really ill with a bad cough. None of us are sleeping terribly well. Every time the little guy has been sick, my husband takes a day to be with him. Next year I’m going to return the favor.
That leads into my next point: buying school lunch next year. A reader wondered why I would ever buy school lunch to not eat it (and how wasteful that would be). I agree. The last thing on earth that I want to do is buy school lunch ever again. I have eaten my fill…for the rest of my life. But many of you have said “I’m going to miss your lunch posts” (you guys are sweet!) and one person even asked, “Why can’t you just continue eating school lunch for the rest of the year?” (I must remind you that I set out to do this for a calendar year, not a school year)
Knowing that you enjoy the school lunch photos, in yesterday’s blog post I offered you a consolation prize by saying I might buy lunch again but not eat it and only if it was a new menu item. The truth is that I think you have seen everything the cafeteria puts out at lunch and I’m not sure I can even buy it again in 2011…
The reason? I can’t eat it anymore! It’s not just food. If there is one thing that I’d like you to take away from this blog that is that food is not just something we ingest to fill up our tummies. Food is something magical.
When I think about my bloodstream, my heart, my brain…they are all created with molecules from the school lunches I have eaten all year long. Shooting through my veins right now are molecules of beef that was treated with antibiotics (29 million pounds of antibiotics was fed to animals in 2009), apples with pesticide residue, vegetables including potatoes grown with chemical fertilizer, whole wheat buns that might not be as healthy as I thought, high fructose corn syrup in the ketchup, and maybe a dye or two. I don’t know all the specific ingredients that are in the school lunches, but now they are now my body’s ingredients, my fuel, my problem.
I’m getting super dramatic here, but I have learned this year that food is more important to me than I ever imagined. I’m forever indebted to myself for acting on this crazy idea in the first place. I like my new relationship with food. It’s far more healthy!
***
Check out this video with Elmo and Mr. Sam Kass, Head Chef at the White House. It’s cheesy, but now I want a burrito!