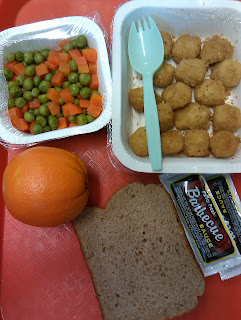 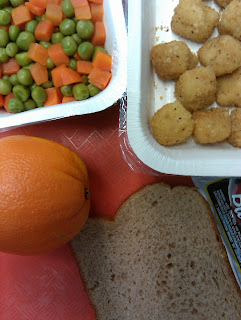 Popcorn chicken. Hmm. I still don’t get how it’s like popcorn (one of my favorite foods of all time by the way). In fact, I’m insulted on behalf of popcorn. Squirts of chicken foam covered in breading and…baked? fried? I guess I’ll never know.
It’s a great strategy of mine to be ravenous at lunch time. It really helps. I devoured the mini-balls of chicken foam just like they were cake pops made by Bakerella. I used a lot of BBQ sauce, which might as well have been frosting. My body was ready for calories so it didn’t care what vehicle delivered them. The mind played yet another trick: I thought they were just delicious. 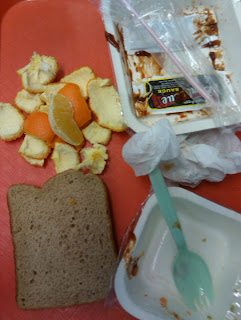 Orange peel
One of you cutie patootie readers suggested timing how long it takes to peel and eat an orange. Why didn’t I think of that? I have been b*tching about how unsliced oranges are too hard for kids to peel, but I had no hard data. It took me 55 seconds to peel the orange. Then it took me an additional two minutes to gobble it down. It should be noted that I have pretty fantastic fine motor skills if I do say so myself. Kids, well, I can’t say. The rind was pretty thick, which actually made it a little more challenging as it came off in little bits not in a large piece. That’s the kind of investigation I’m going to have to undertake next year when I’m not chained to my room for lunch every day.
The veggies tasted good to me: actually better than usual. That’s only my perception, which may or may not be reality.
I asked a couple kids what they had for lunch.
“Chicken nuggets and milk!” and another agreed, “Yep!”
“Did you guys eat the veggies?”
Total silence. They were looking around the room.
“Did you eat the peas and carrots?”
“Mm, hmm,” one boy responded nodding.
I laughed. See what I mean about how they tell me what I want to hear?
***
Regarding the Hart and Risley study from yesterday, I don’t take such a bleak view. I do believe that there can be tremendous growth, especially before age 7 (some contend that personality is set by first grade). I believe kids grow and learn at their own pace. I think early intervention works (from birth to 3) and preschool (age 3 to 5), changes the trajectory of students’ lives, especially if kids get two full years.
Here’s another wrench in the works: what about when your child was born? I see children with summer birthdays starting kindergarten at age five and really struggling (boys having the worst time). Their friends born in the fall and winter have big advantages. Although many parents want their child to start kindergarten as soon as possible, there should be no stigma attached to being older.
I speak from experience. My birthday is in September. My mom pushed to have me start kindergarten at age four. I was academically ready, but I wasn’t socially mature. I was pretty shy. Then my family moved all over tarnation and I had trouble making friends. I became extremely socially anxious, which I didn’t totally shake until I was into my 20s. When I was in high school, the girl with the locker right next to mine was more than a year older than me and kids from the year below mine were my same age. I graduated high school at 17 and college at 21! I was a baby! Thoughts on age and schooling?
***
I timed something else: it took me 2 1/2 hours to write last night’s blog post. I was sitting at my desk from 8:20ish to 10:45ish. That’s why I get nothing done around the house on weeknights. No wonder I’m completely wrung out by the end of the week. (That’s why I can’t respond to each of your comments individually. Sorry, will you accept a rain check for next year?)
I used to laugh at celebrities when I heard that they were hospitalized from “exhaustion.” Exhaustion from what? Looking beautiful? Now I get it. When you have multiple commitments and obligations day after day it takes a toll. Vacation is a necessity. Say it with me, “ONE WEEK OF LUNCHES LEFT!”
***
EAT ALONG CHALLENGE — MY SON’S LUNCH – DAY 5 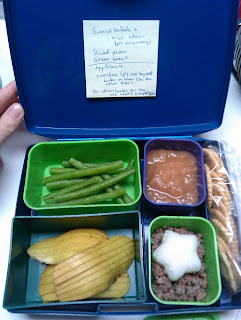 My son’s lunch starting from bottom left, counter-clockwise: sliced organic pears, ground buffalo and a rice star, gluten free crackers; organic apple sauce, steamed green beans
One of the annoying things about packing for me is that while I’m packing my son’s lunch, he’s often begging for food I’m putting into his lunch. It’s like, dude, eat your breakfast! Often if he has yogurt for breakfast and I pack it, then he won’t eat it at daycare. This morning for breakfast he ate a bunch of blueberries and pears and then some gf cereal in goat milk (a big breakfast for him). He started demanding more pears and I had wanted to save those for lunch. Thankfully even though he ate a lot of pear slices at home, he ate all of the pear slices I sent for him at daycare. The only thing that came home was three green beans! I didn’t pack blueberries because of the choking hazard thing, which I’m now taking even more seriously after the anti-grape comment from an ER doctor!
My husband and I have been buying more buffalo meat. A long time ago when we first discovered Fuddrucker’s, we tried both buffalo and ostrich burgers (they taste great). I haven’t been to Fuddruckers in many years, but we have wanted to continue eating buffalo. We’re not into beef at all.
For dinner I made very plain buffalo tostadas with a corn tostada, buffalo, sliced mini-tomatoes and avocado. If I had had more time, I would have made some kind of black bean mixture with the buffalo, but I didn’t get the chance. Anyway, our son devoured the buffalo on “chips.” So I sent it for lunch and I guess it was a hit.
My boy doesn’t always want to eat rice so when I found these rice molds on amazon, I wanted to try them. We make rice in a rice cooker and when it’s hot, I place it into the molds. Then I feed it to him and freeze the rest so that I can just plop them into his lunch. He thinks rice is a lot cooler when it’s in a shape. Yes, I do resort to trickery!
The daycare menu was ground beef, pasta with red sauce, diced pears, and baby peas. My lunch attempted to mimic, but I couldn’t do even gf pasta again. Their lunches are so wheaty!
As far as getting our son to eat well, we are firmly in the “Here’s your food. Now your father and I are going to pretend we could care less if you eat or not.” We got that advice from an experienced mom on New Year’s Eve, literally days before he first got fussy. So there were some nights in January when our son ate one mouthful for dinner and that was it. We tried not to freak out. I guess it worked. Also whenever he was sick, he would stop eating and we wouldn’t force it. And upon recovery, he would eat like a champ. He was sick so frequently that we just got used to that cycle.

YEAH! We made it. Thoughts on the week?

A $25 gift card to ChefsCatalog.com. I received the gift card at BlogHer, but I haven’t gotten around to using it. Now you can!