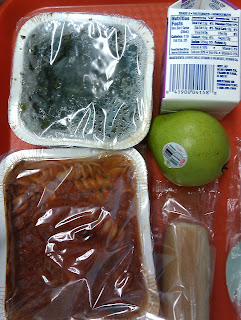 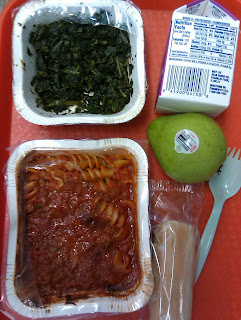 Today’s menu: pasta with meat sauce, spinach, breadstick, pear
I smiled. Seeing the pasta on the tray was like greeting a friend. It was the first meal I had way back on Day 1. It’s hard to believe that I’ve eaten this much school food and lasted this long. Frankly, I thought for sure I would have been found out by now.
Anyway, I love hot food. I was starving by the time I got to lunch. I loved the feeling of piping hot pasta going down my throat. It was cold outside and there’s nothing better than a hot lunch. A sandwich just can’t compete.
I even squealed “Spinach!” when I opened up the plastic. It didn’t taste half bad either. Milk was a semi-accident — today I accepted it when they offered it to me so that I could look a little closer at the packaging. I may want to do a further post on milk down the line (I blogged about milk before). As usual I didn’t drink it because my lactose intolerance is severe. I gave it away to a friend. 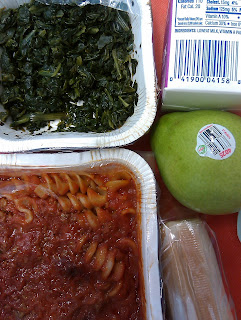 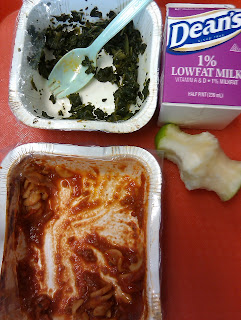 Probably one of the last times I’ll eat wheat pasta
Did you ever hear about the Hart & Risley study? It documented the “link between the academic success of a child and the number of words the child’s parents spoke to the child before age three.” They found that there was a 30 million word gap by age three between the vocabularies of kids from low socio-economic backgrounds to those of kids from higher SES. Even more devastating the researchers found that it was insurmountable. What do you think about that?
***
EAT ALONG CHALLENGE – MY SON’S LUNCHES DAY 4 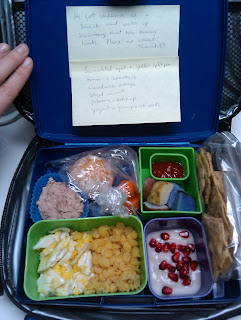 We’re hoping for a better night tonight. Someone did not sleep well last night. He was awake in the night screaming. It has happened two nights in a row, which coincides with him being accidently given some pretty minor wheat snacks during afternoon snack both days. When I picked him up from his crib at 11:30 am last night, he was arching, kicking his legs out, and screaming. Until going gluten-free, he was awake during the night frequently. I have read that for some kids gluten disrupts night sleep. Well, we have always had a bad sleeper (since coming home from the hospital). That was until this fall. Things that make you go hmmm.

His regular caregiver was back and we all rejoiced. I chatted with her about what happened and how heartbreaking it is that my kid has to be that kid with allergies and carry that burden. I don’t want to be a “high maintenance” mom but now I’m going to have to be, for the health and well-being of my son. Don’t get me wrong, I will and do advocate for my little one, but I still mourn the fact he can’t have a normal experience.

So he ate everything except for all of the eggs and the yellow peas. I mentioned before that my husband is learning to cook Indian food. He’s starting with rasams. I don’t want to discourage him, but what he is producing is insanely spicy. He tried to make something last night (after our son had gone down) and said happily, “Don’t worry, I used half the cayenne pepper.” I could barely take two sips.

Anyway, to make the base he had to use the juice of a 1,000 yellow split peas. Just kidding, but he did have a ton of non-spicy split peas left over and I thought I’d toss them in our son’s lunch. My kid did not like the peas and didn’t finish them. I’d estimate he ate only half his eggs and peas. He also left half of the mandarin orange. Everything else was consumed.

Someone asked about the metal lunch boxes used by Liz Snyder from ieatreal.com — they are from Planetbox. I’m interested in doing a big review of the products available for lunch packing as I go back to packing for myself. There are many options to choose from and they can be made waste-free, which some districts are requiring. My son’s lunches aren’t waste free since I use plastic wrap on them.

The soup from yesterday (Imagine brand) was dairy free and came in a large paper box. I’m buying my soups from boxes now. Hopefully I can make our own soup next year!

Link up your lunch below (sorry, somehow I forgot to add yesterday’s linky tool!): 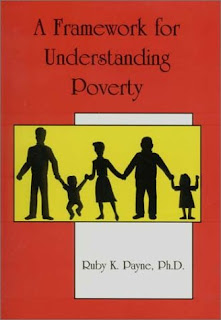 A copy of A Framework for Understanding Poverty. I had never heard of this book until a close friend of mine told me that her principal gave a copy of the book to every teacher in her school. She is a person of color and told me that she really liked this book. I figured I should read it too so I bought it. I’ve found that the book is somewhat controversial in certain circles. Some people think the author stereotypes people and others think she provides important insights into the lives of people living in poverty. I think that there is truth to both perspectives. But I think it’s an important (if not a little disorganized) work that does help the reader think about poverty in a new way.