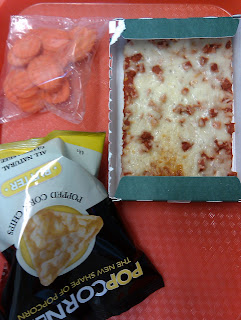 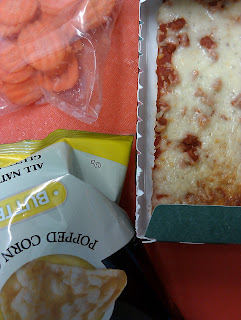 Today’s lunch: pizza, carrots, popcorn chips, fruit cup (see below — it didn’t get in the first shot)
I’m, like, so sick of pizza, dude. But I ate it anyway (SEVEN MORE LUNCHES TO GO). It tasted ok. I’m trying to think positive now. I’m mostly successful.
Today I felt a lot of joy. I’m trying to figure out what made me so happy. I think a lot of it is that eating school lunches is almost over. I really believe that not having control over the food you eat screws up your brain. The psychology of not controlling what you consume, day after day, well, it has done a number on me. Someone should do some research into that and get a PhD. When you are stuck with something for so long…with no escape…you have to embrace it.
Also I have a good friend at work that I realized recently just makes me happy. He is a kindred spirit (don’t worry, he’s gay). A long time ago a dear friend told me, “I’m happy just knowing that you are in this world.” That’s exactly how I feel about this coworker. I feel so lucky to have him in my life, but especially where I work. 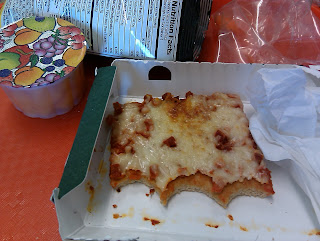 Hello fruit cup!
So the fruit cup didn’t make it into the first shot. I have a confession to make: I position the food on the tray just so. I took the fruit cup off and I didn’t put it back on. I guess you could say I “style” it, but really it’s nothing that elaborate.
The popcorn chips were eh, but the carrots were better. I ended up running out of time to eat the fruit cup so I ate it at the end of the day.
I forgot to share with you that one of my students was sick after yesterday’s lunch (sloppy joes). She complained that her stomach hurt late afternoon within 30 minutes of dismissal. This particular student has a sensitive stomach. I wasn’t sick from yesterday’s lunch, but I did have random discomfort both yesterday and today. I used to never notice how my body felt after eating, but now I do.
***
EAT ALONG CHALLENGE – MY SON’S LUNCHES DAY 3 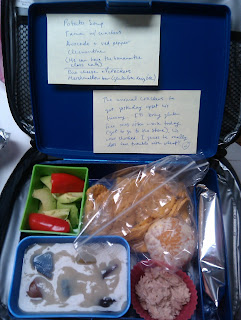 I totally deviated from the regular lunch the kids are getting today. Their menu consisted of diced ham with buttered whole grain noodles, green beans, and bananas with “fruit” and american cheese slices on crackers as snacks. The only thing I said he can eat with the kids was the banana.) I wanted my soup lover to get some soup. I buy the “Imagine” brand from Whole Foods. It’s gluten free, but when you read the back it has a huge list of things that it doesn’t put into their soup. I’d really love to make my own soup and maybe next year I’ll get the chance, but for now this is perfect. I tasted the soup before I put it into his lunch and I thought it was peppery. I like their tomato soup as well as their squash soup, but this didn’t do it for me quite as much. I was running low on time so I dropped a couple sliced purple and white potatoes into it to give him something to break up the texture.

I like to eat tuna on crackers with soup. So I sent tuna and crackers for my boy. The clementine is peeled, but he likes to rip it open his “own self.” Under the crackers is something called “rice cheese.” It looks exactly like the pre-packaged singles that they give out at daycare for snack (I know, before I investigated I thought it was plain old sliced cheese, but it’s even more processed). The rice cheese is dairy free and soy free. I haven’t tasted it, but my son loves taking the cheese out of a package and gobbling it down much to my own chagrin.

Lastly I sliced up some avocado and a mini-red pepper. I bought some vegetable cutters that cut veggies like peppers into little shapes and sent along pepper shapes in his lunch a week ago. His caregiver said that he didn’t touch them because he didn’t know know what they were. At home he likes to chew on the pepper and crunch it, but I’m not sure I know how much he actually eats. So I sent it just sliced this time. I believe it’s important to play with foods at this age. Eating should be a sensory experience!

His main caregiver was absent today too so I didn’t get a straight answer about what he ate. I guess he didn’t eat everything, but no one could tell me exactly what he didn’t like and didn’t eat. I walked in and he was eating Cheerios with the other kids! Oh jeez. The morning there were two staff members and in the afternoon there were two different people. I hope his main, regular caregiver comes back soon because this is not good. I’m going to have to formalize the fact that he doesn’t eat wheat or dairy. I’ve been dragging my feet on it because I think it will require a doctor’s note. The two main caregivers know it, but if there’s an absence, it all goes out the window.

I’ve been a big fan of Laptop Lunches ever since I read Vegan Lunch Box a long time ago. If you are considering buying Laptop Lunches as a holiday gift, I suggest buying the Bento Kit as well as an extra package of the replacement interior boxes. That way if you are in a rush and you don’t get around to washing the lunch containers from one day, then you are covered because there are clean ones at the ready in the cupboard. They are in constant use for my son’s food.

My son’s lunch’s cost calc? Well, I don’t know. It’s not about the money: it’s about health. I like my husband’s philosophy of grocery shopping: it’s not wasteful if you are going to eat it.

Link up your lunch below — 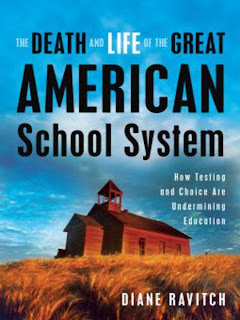 My copy of The Death and Life of the Great American School System. This is a very interesting book, but one that I haven’t had the time to finish (wonder why) and I think you will enjoy it immensely. Anyone who participates is eligible, even if you are only able to participate for one day this week. Winners to be announced next week.