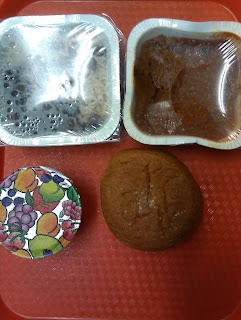 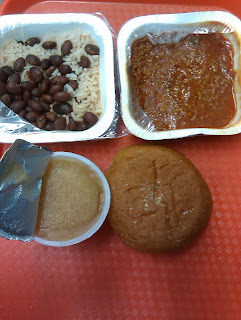 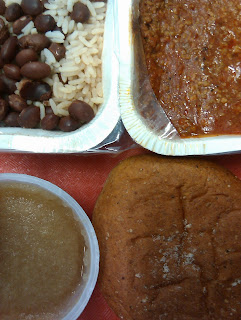 Today’s menu: sloppy joes, whole wheat buns, beans/rice, applesauce
Want brown with your brown? The sloppy joe mix actually tasted ok. I wish I knew what I was eating, but I can’t find the nutritional information anywhere at school or online.
I got through the sloppy joe meat just fine. But the beans and rice were a little on the dry side. The applesauce was frozen so I ate around the edges. 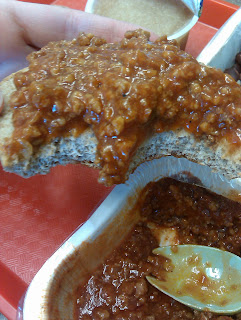 My hand being self-serving 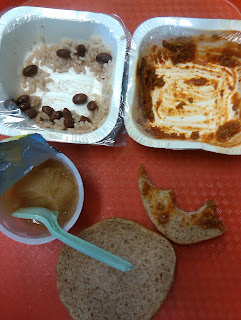 What I left behind…
I’m getting nostalgic as I wrap up the project. I’ve been thinking about how it has changed me. I spent the first half of the project paranoid and worried about being found out, regretful about risking so much. Now I couldn’t be happier that I decided to do this, even though it has been completely out of my comfort zone.
A few years ago I took one of those personality tests, which revealed that I am a INFJ. I love taking surveys, but I don’t always put that much stock in them. But that result is spot on. One of the many things it states is that I don’t like conflict, which is true. The project has felt subversive to me and that is not how I normally am. Here’s to taking risks!
***
THE EAT ALONG CHALLENGE – MY SON’S LUNCH 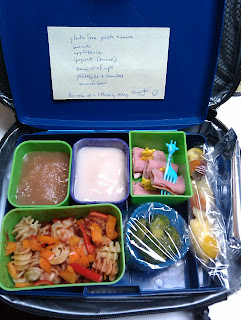 My son’s lunch from bottom left, counter-clockwise: quinoa pasta, sauce, and sliced peppers; silicon cupcake full of broccoli; chopped pinapple with sliced mini-tomatoes, far right snack bar, organic ham roll-ups with plastic picks, coconut milk yogurt, organic applesauce.
The official daycare menu today was: fish nuggets, mac and cheese, baby peas, and applesauce with fruit and yogurt as snacks. I tried to mirror some parts of what the other kids were eating. I sent pasta since the other kids had mac and cheese and I also packed applesauce, fruit and yogurt. For meat I decided on deli ham roll-ups (organic, no gluten or casein) and I threw in broccoli instead of peas.
I said yesterday that I thought he ate everything because nothing came home, but today again the lunch box came home empty and I can’t believe that he ate everything two days in a row. I think one of my son’s regular caregivers was absent today and I don’t know what happened yesterday. When I first started packing, the lunch box came back empty and the daycare’s official summary sheet stated: My son “ate everything.” That made me very concerned that I hadn’t packed enough so I started sending what you see above and another extra container and an extra snack. Finally I asked and found out that he hadn’t eaten everything, but that’s what they circle on the sheet when the kid tries a food. I said that I wanted everything back so that I could figure out what he liked and what he didn’t like. I guess this week that system got screwed up.
When I saw the substitute caregiver this morning, I forgot to mention his dietary issues to her in person and later at work I worried that he’d somehow get cow’s milk by accident. Well, that didn’t happen. Thank god, because it does a number on him. However, I guess he did do a good job cleaning up and got animal crackers. That was his first gluten challenge in a few weeks. My husband and I shrugged about it at home, waiting to see. I’m not going to get graphic, but it did affect his digestion tonight.
You’ll notice I’m using some bento products. I bought the cupcake thingys and those picks online recently after much consideration. I was concerned that the daycare would ban the picks due to possible choking hazards. But they haven’t mentioned the picks. The daycare briefed me on acceptable foods and choking hazards awhile back when they realized that this was not a fad, but that I would be packing lunches for good. I have to make sure not to pack hot dogs, grapes, and raisins among other things…I can’t remember the full list. Bad mommy!
Once I sent raisins and they told me same day that it was not good. I have sent a chicken sausage chopped up very small and I think I’ve gotten away with that! Personally, if I pack my son’s lunch and he chokes on the food, I don’t think I really could sue the daycare nor would I want to. Theoretically he could choke on anything, right? Scary but true.
It’s tough because I’m not packing any gluten or dairy. Then no choking hazards. Then absolutely no nuts per daycare rules. Luckily there is still plenty left.
Lastly, the compartments can be microwaved and heated up. I leave it to the discretion of his caregivers. The other kids get hot food too. Thanks for all your supportive comments!
To link up your lunch for today, see below:
PRIZE GIVEAWAY #2: 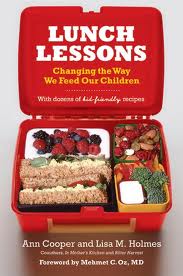 A copy of Lunch Lessons. Anyone who participates is eligible, even if you are only able to participate for one day this week. Winners to be announced next week.